To say that Cubans love their baseball would be an understatement. Just take a walk through Parque Central in Old Havana and look for the Jose Marti Monument. There you will find what is known as the 'Esquina Caliente' or Hot Corner. Here is where the so-called baseball experts meet up & you can hear their passion from a distance. They work themselves up to a frenzy discussing the latest goings-on in the Cuban baseball world, to a point where it almost seems like they're going to hit each other.
Baseball came to Cuba in the late 1860's when Cubans who went to school in the US & American sailors in Cuban ports brought it to the Island. It spread quickly, the Cubans loved it, especially those fighting for their independence from Spain. Spain had gone as far as imposing a ban on baseball in Cuba in 1869 claiming they were watching more Baseball than Bullfights. The Cubans continued to use baseball as an expression of their resistance.
The first official game was played in December 1874 at Pueblo Nuevo, Matanzas. The Cuban League was founded in 1878 and was made up of only 3 all white amateur teams. Club Havana won the first championship that year. Within a couple of years it had become professional and turned the better players into celebrities. It grew rapidly in popularity and would mimic almost exactly the way the American Baseball League was created. During this period, Cuba introduced the sport to other Latin American countries: Mexico & Puerto Rico in 1890, Domenican Republic in 1891 and Venezuela in 1895.
After the war of independence was won in Cuba, blacks were allowed to enter the league. It was a reward for having fought alongside whites for the liberation of the country. Once they started playing, their abilities were obvious to everyone and all the teams wanted black players. Negro players that couldn't play in their own country, the United States, would come to Cuba to play. Many great Afro-American players came to Cuba during this time. In those days, Cuban teams played very well against professional US teams that came to play them often for training in the off-season. By the 1920's the level of play in Cuba was impressive. The league lasted from 1878 until 1961. It was even used as spring training for the Pittsburgh Pirates in 1953 and the Brooklyn Dodgers in 1947.
After the Revolution, baseball was no longer viewed with commercialism but as a symbol of Nationalism. It turned amateur once again and turned the sport back into a pass time or entertainment. The new league of 1961 started with only 4 teams with another 2 joining the next season and by 1967 it had expanded to 12 teams. It spread through the provinces as stadiums were being built and today the league has 16 teams split into 2 divisions. The season is about 90 games that start in November and finish in April followed by playoffs.
I don't know how good baseball was in the early 1900's but I can tell you they put on an entertaining show today. It's good quality baseball and definitely worth the price of admission. My price, the tourist price, was $3 for the best seat I could buy. A Cuban would pay about 12 cents for the same ticket here at the 'Estadio Latino Americano' in the 'Cerro district' of Havana to watch the 'Industriales' play. The playing surface and lighting systems are of Major League quality but a little run down. The Park which was known as the 'Estadio del Cerro' or Stadium of Cerro was opened in 1946 with a capacity of 31,000 and opening day brought a full house. It was and still is the top Park in Cuba. In 1961 the name changed to what we know it as today and in 1971 they renovated and expanded to it's current capacity of 55,000 (minus the broken or missing chairs). No alcohol is served, which may be a good thing. The all-Latin crowd can get very heated, you don't need to throw alcohol into the mix. It's very safe and there are a lot of police around to protect the peace. The fans are actually very entertaining as well, one guy even brought a rooster. As far as food goes, forget it. The snack food isn't too bad but no variety and homemade stuff....shelled roasted peanuts and fried stuff for example. The most solid food would be from a guy with stand selling pork sandwiches that I wouldn't trust, exposed for who knows how long in the heat. You have hawkers coming around the seating areas with the snack foods and local beverages. It's pretty much like a North American Baseball game going through exactly the same motions but with a slightly different scenery. I enjoyed it very much, even though it was the end of the season and the game meant nothing to either team. The stadium was almost empty and with our tickets we were allowed to walk anywhere on our level...on either side of the ballpark. As the sun hit where we sitting, we just moved to the other side of the stadium....how cool is that. Another thing I loved, smoking is allowed. Just like back in the early days of American Baseball, I was able to smoke my cigar in the Stadium.
I'll go back and as a matter of fact, if I can catch a game in another province I would go. I recommend all baseball fans catch a game if they can. The ticket window may be a little difficult to find but if you ask someone there at the gate as we did, I'm sure they'll point you in the right direction. 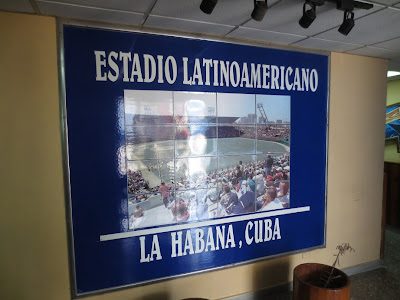 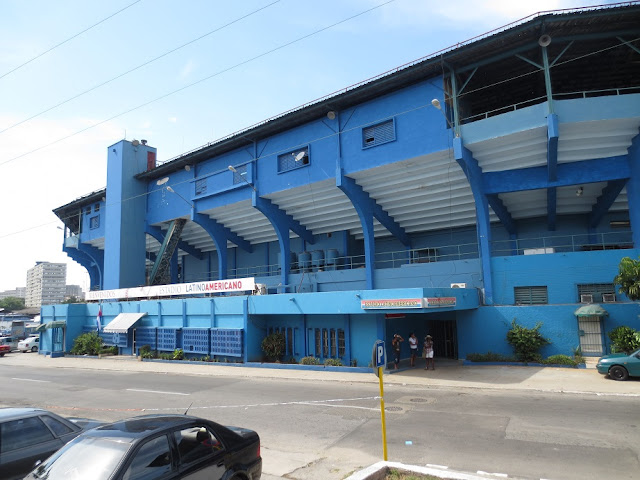 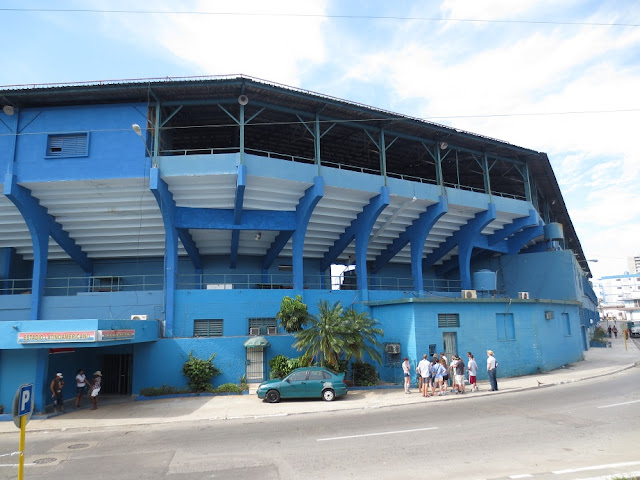 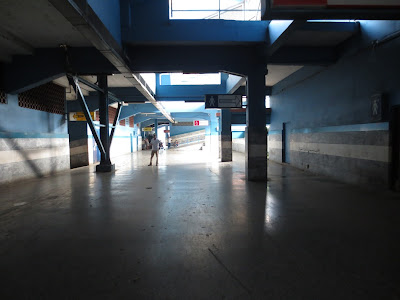 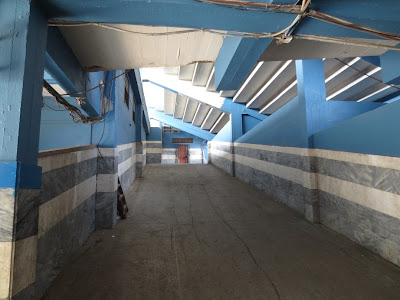 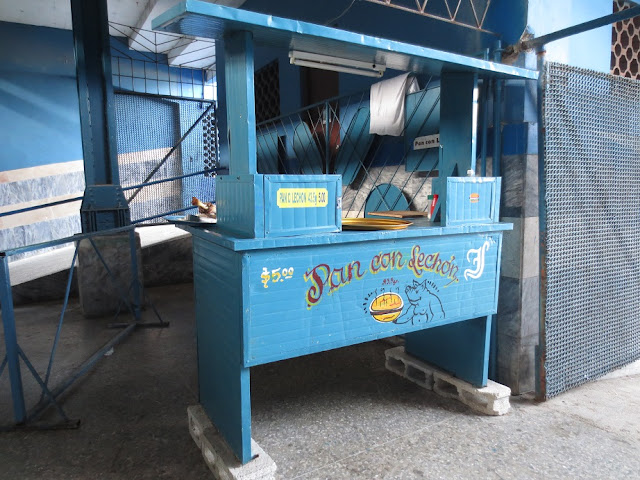 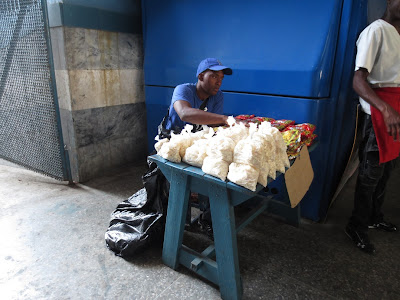 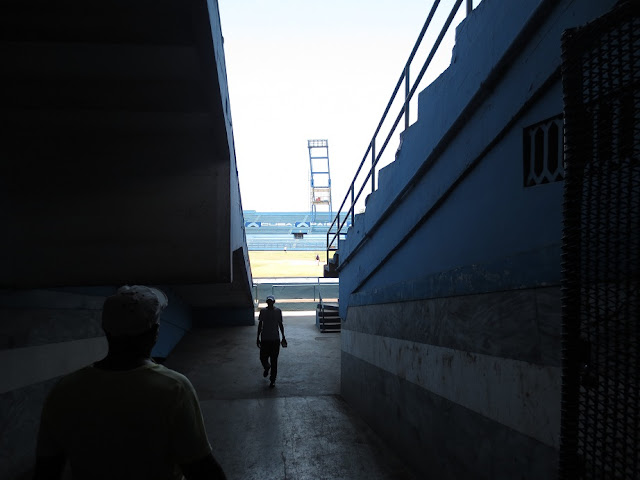 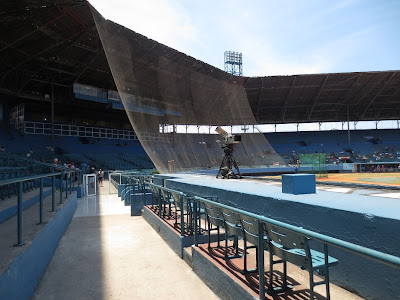 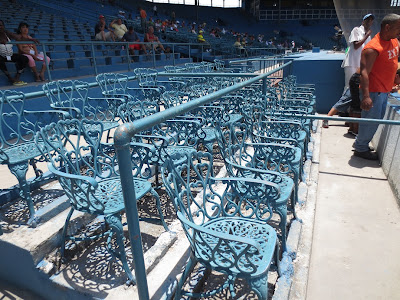 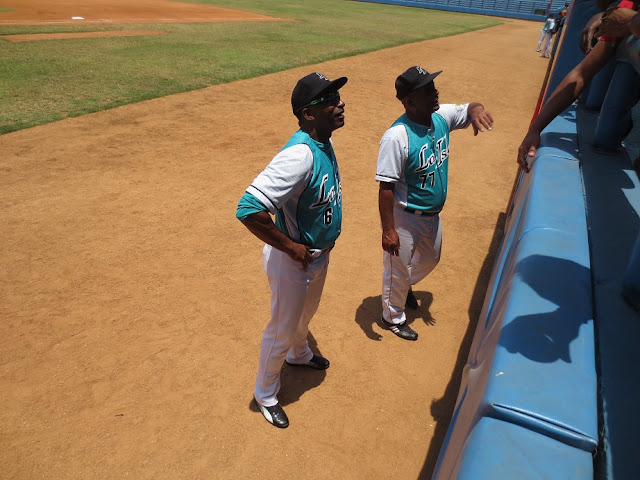 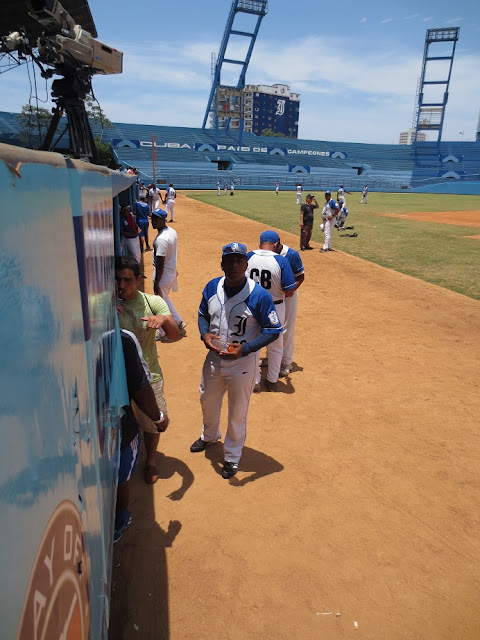 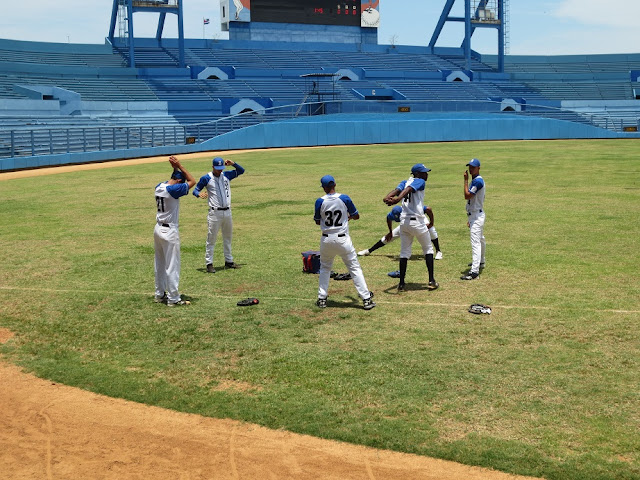 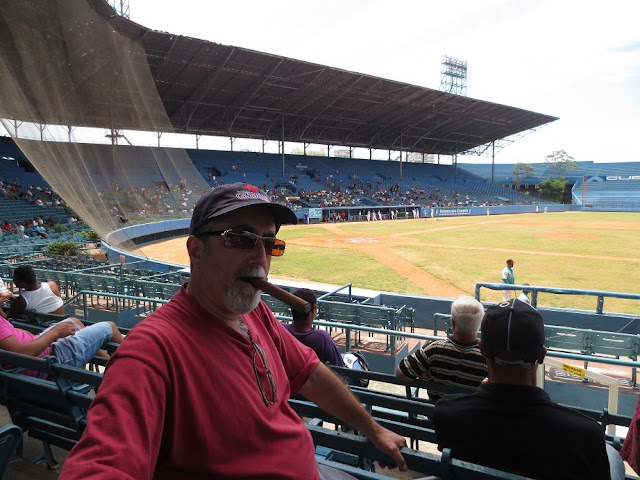 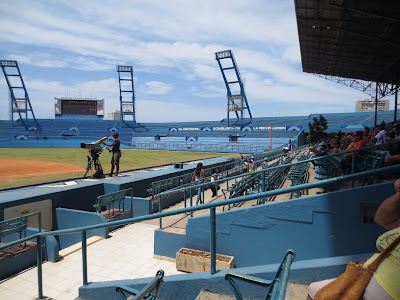 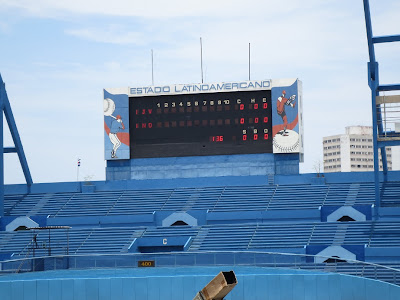 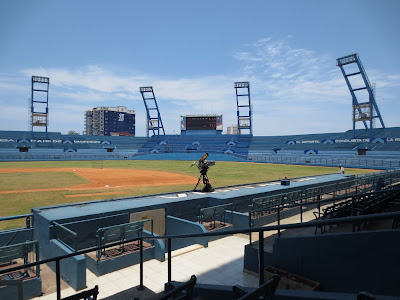 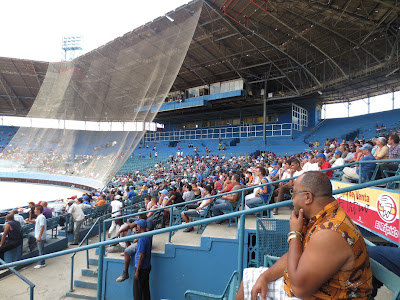 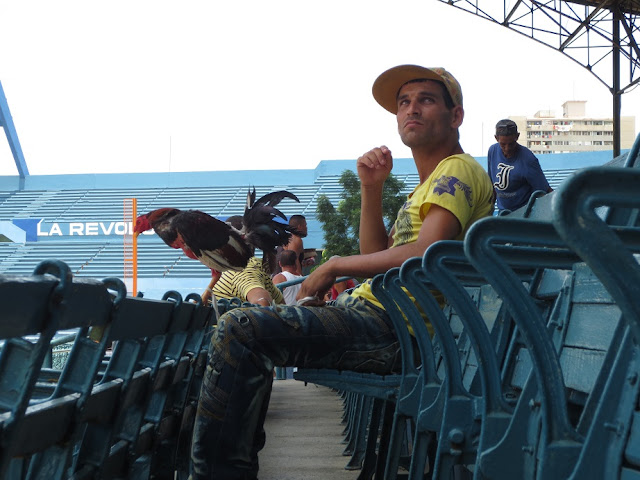 A fan brought a rooster 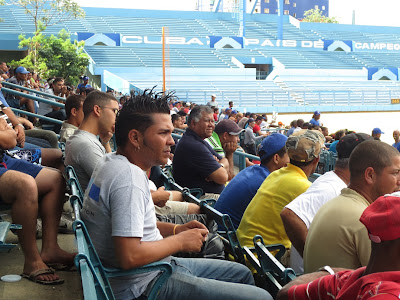 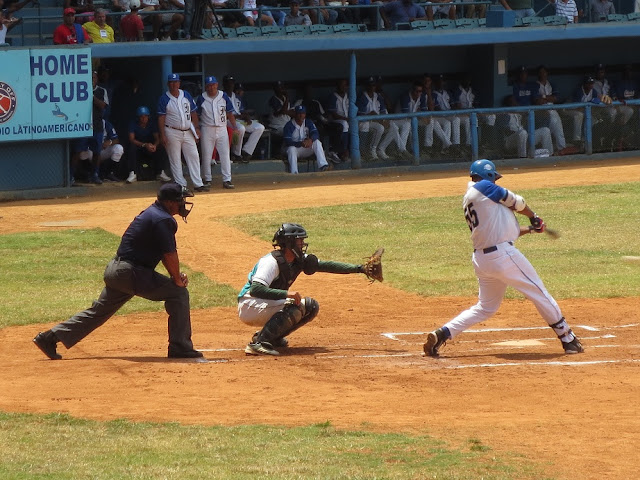 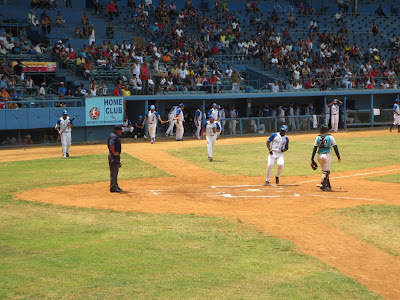 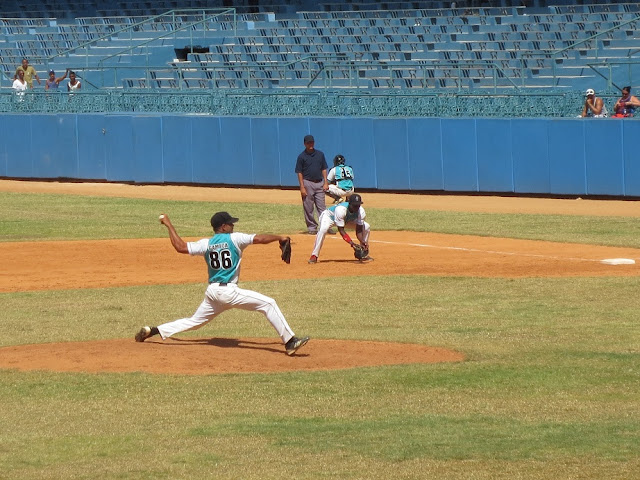 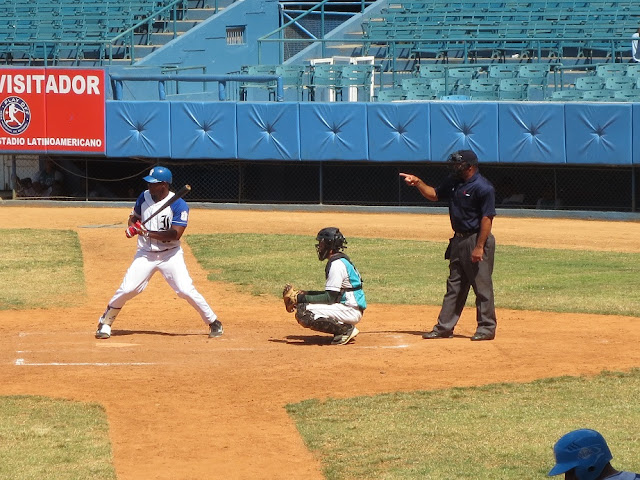