On January of 1897, Gabriel Veyre (an early film director and photographer born in France) arrived in Havana from Mexico. He worked for the Casa Lumiere and after introducing movies to the Mexican capital 6 months earlier, he was wanting to do the same in Havana. It all started on the 24th of January, 1897, on Prado #126. What began incorrectly as entertainment rapidly turned into a means of; recreation, culture, education and of course, propaganda. The Prado strip (Havana's most important boulevard at the time) and it's surrounding area lead the way with it's saturation of movie theaters in the early part of the 20th century. It started with the accommodation of existing locations before the construction of buildings designed strictly as movie theaters. Many nondescript residential homes were adapted to show movies, the prerequisite being that the buildings had to be long and narrow. This revolutionary invention changed people's way of thinking in a short period of time, turning the spectacle into an industry.
The majority of the movie theaters that existed within the first quarter of the previous century were theaters adapted to show movies or private residences that were remodeled for that intent. However, amongst this hap-hazard of an array of cinemas emerged a few that were built with the sole intent of becoming a movie theater. The first movie theater that was built with that purpose was the 'Actualidades' located on Avenida de Belgica, or as it's more popularly known as Calle Monserrate between Calle Neptuno and Calle Animas. It opened on April 18, 1906...the building is still there, the sign is falling apart but it's definitely closed. Between 1915-1920 just on the tiny strip of Prado alone there existed, at some point, 5 different cinemas at one time.
The first open air cinema opened on July of 1909 at Prado and the Malecon named 'Miramar Gardens'. This was during the time of silent films. Architectural styles of the buildings that were being constructed to house movie theaters became a factor starting around the 2nd & 3rd decades of the last century. Some of these buildings were a colossal testament to the dedication Cubans felt towards this form of entertainment. During the early part of the 1920's movie theaters began popping up along streets near Prado and outwards to other municipalities. Not long after Art Deco was introduced in Paris, it filtered down to Havana & some of it's cinemas, including; Fausto, America, Warner Radiocentro (Yara) and Arenal....to name only a few. 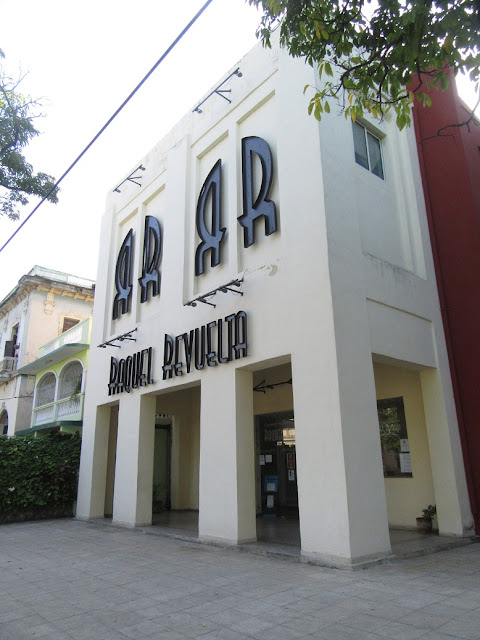 Olimpic (Teatro Raquel Revuelta)  -  Calle Linea #609 esq. Calle B, tel. (53) 78330225 (Vedado) Built in 1920 with 740 seats, it went through a major renovation in 1938 and was still operating as Cine Olimpic in 1958. The Raquel Revuelta theater, which showed live theater productions, was created in 1958 by various artists including Ernestina, Sergio Corrieri, Raquel Revuelta and Vicente Revuelta. Here is where I found it's history a bit sketchy...at some point after this it was used by the Ministry of Culture as a warehouse and remained closed for almost twenty years. By 2013 it had been refurbished and re-opened as Cultural Center Raquel Revuelta which is still in operation today. 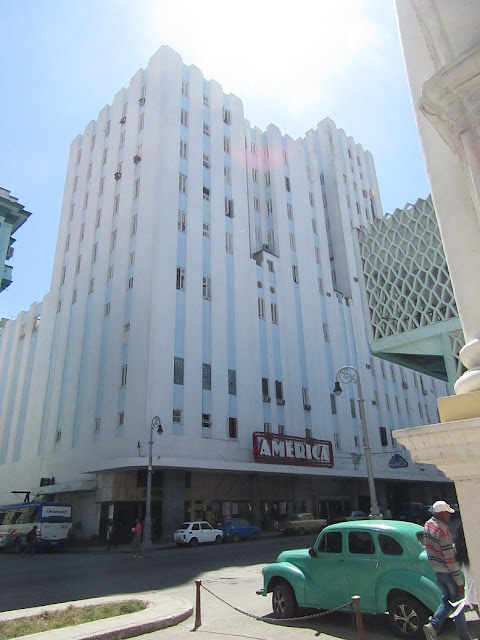 America  -  Calle Galiano e/ Neptuno y Concordia (Centro Habana) The Art Deco building opened it's doors to the movie theater with 1775 seats in 1941. The cinema was built within this 11 story building which also contained businesses on the ground floor with 64 apartments above. I don't believe they show movies here any longer but there are live performances of some kind. The 'Casa de la Musica' located next door. 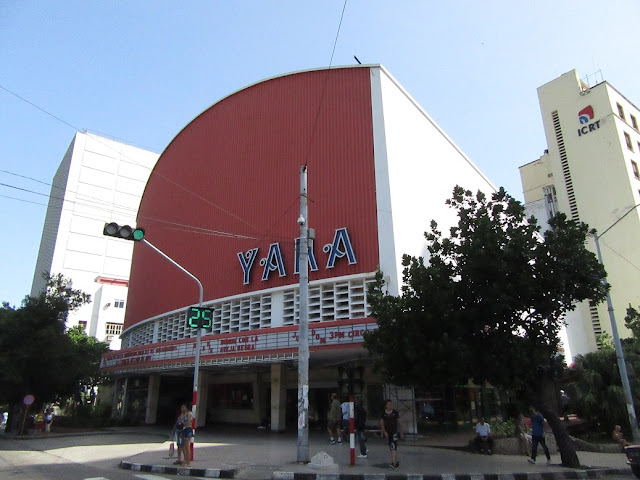 Yara  -  Calle L #263 esq. Calle 23 (Vedado) Originally opened it's doors as part of a complex named the Warner Radiocentro in 1945 with the movie theater containing 1,650 seats....it was operated by Warner Bros. and of course would show their movies here. It changed it's name to 'Radiocentro' in 1953 before changing again to it's current name 'Yara' in 1960. It's home to many of the film festivals and in 2015 became one of the first cinemas to have digital projection. It kept it's 35mm projector so it could still show classic films. It's still shows movies now and is probably the best movie theater in town. I haven't seen a movie here yet. 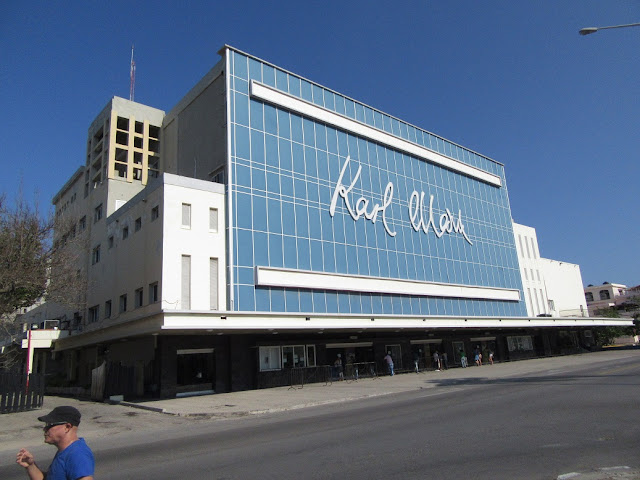 Karl Marx  -  Corner of Avenida 1ra & Calle 10 (Miramar) When it opened in 1949 under the name 'Blanquita', it was the largest cinema in Havana with 6730 seats. It was also used for live theater at that time. It changed it's name to 'Teatro Karl Marx' after the revolution in 1959 and today is used for live performances and concerts. I watched a concert here and found it to be a great venue. At one point there was even a skating rink on the premises, I would assume it was before the revolution. 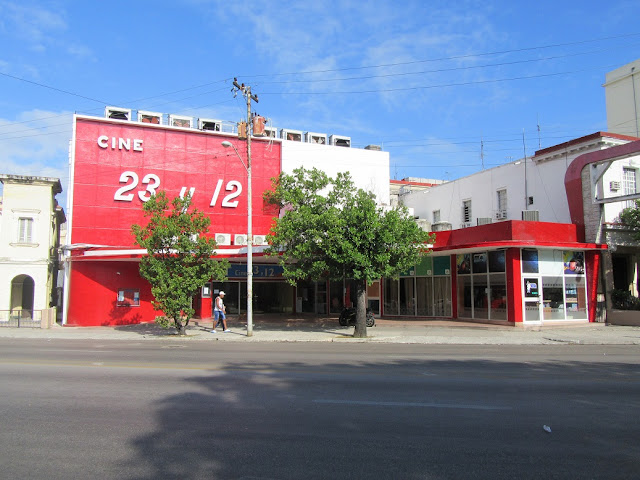 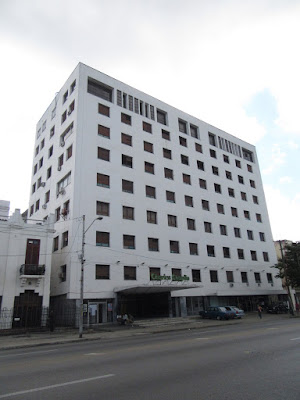 Charles Chaplin  -  Calle 23 #1155 e/ 10 y 12 (Vedado) In 1950 a commercial center and the 1500 seat movie theater 'Atlantic' was built on this once empty lot. The building today is also home to the Cinemateca de Cuba (aka Centro Cultural Cinematografico ICAIC). It changed it's name to 'Charles Chaplin' in 1983. It had a renovation in 2004 and is a leading venue for International film festivals. In 2015 it became one of the first cinemas in Cuba to be equipped with digital projection. I believe they still show movies here. 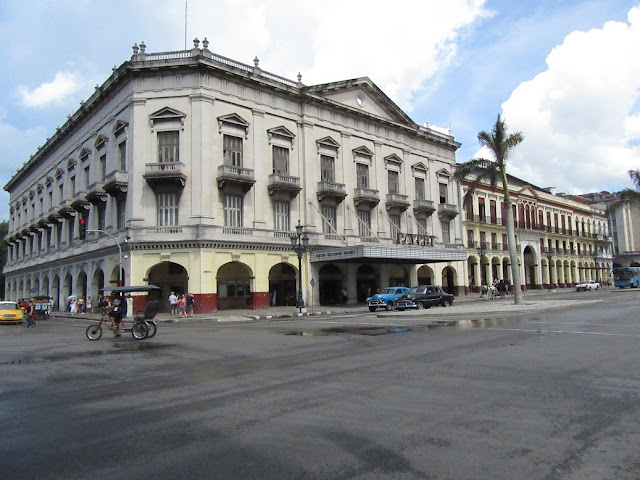 Payret  -  Prado #503 esq. Calle San Jose (Habana Vieja) It opened it's doors with 1890 seats in 1951 and until recently was still showing current hollywood movies here, albeit sans air-conditioning. It recently closed it's doors and during my last visit it was boarded up...what a shame, who knows if it will re-open or maybe become another Hotel. 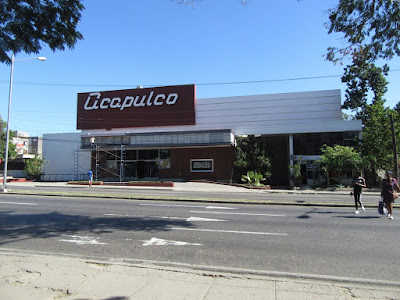 Acapulco  -  Avenida 26 e/ 35 y 37 (Nuevo Vedado) This cinema opened in 1958 with 1500 seats and still functions today as a movie theater. I have seen a movie here a few years ago, the seats were wore out and the floor was sticky. I don't think they show hollywood pictures at this location. 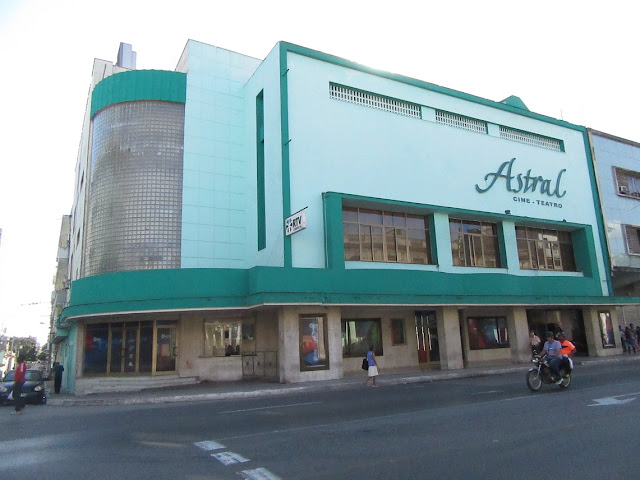 Astral  -  Calzada de Infanta #501 at the corner of Calle San Martin (Centro Habana) Opened in 1947 with 400 seats. Many say that it was the most comfortable cinema in Havana. Today with a capacity for 2000, it's been used primarily for live theater and the taping of the most popular programs on Cuban Television. 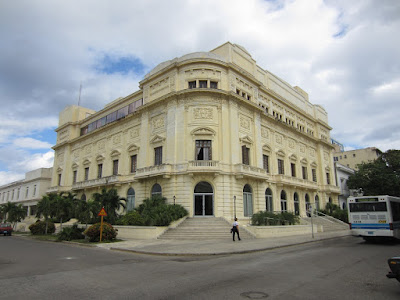 Auditorium  -  Calle Calzada y Calle D (Vedado) Originally opened in 1928 with 740 seats, it changed it's name to Amadeo Roldan in 1961. The theater was destroyed by a pyromaniac in 1977 & re-opened in 1999 as the head office of the National Symphony Orchestra of Cuba. 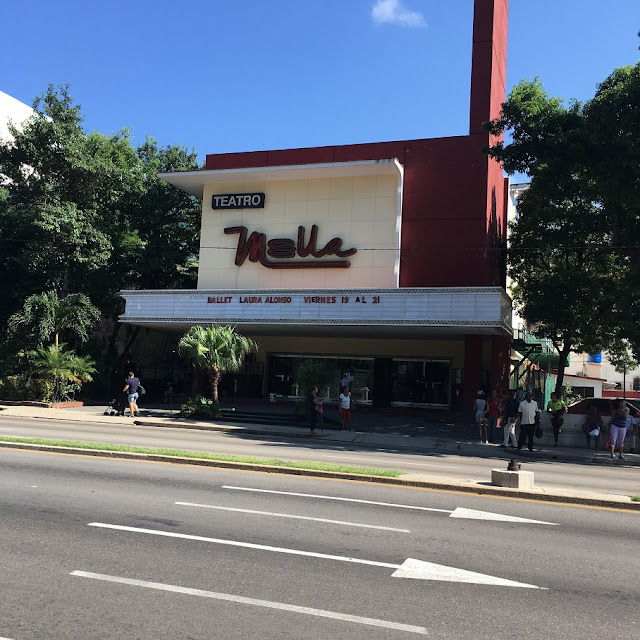 Mella  -  Calle Linea #655 & #657 e/ A y B (Vedado) It was built specifically as a movie theater (1887 seats) in 1950 with the name 'Rodi' and was still showing movies in 1958. Recently changed it's name to 'Mella' and now is used for live performances including concerts and the ballet. I have seen a couple of jazz concerts here during their jazz festivals and found it quite comfortable. 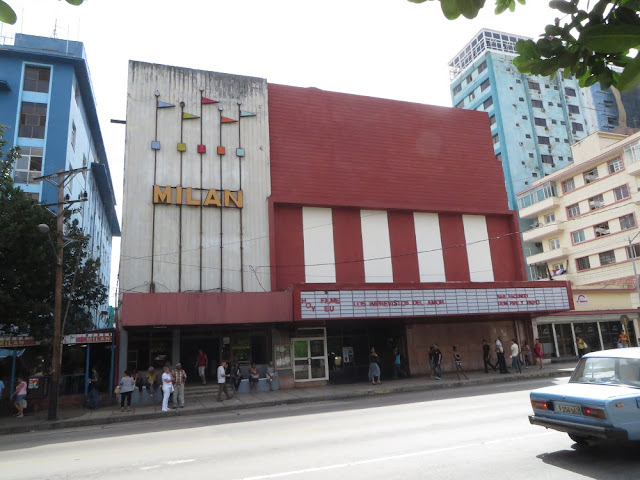 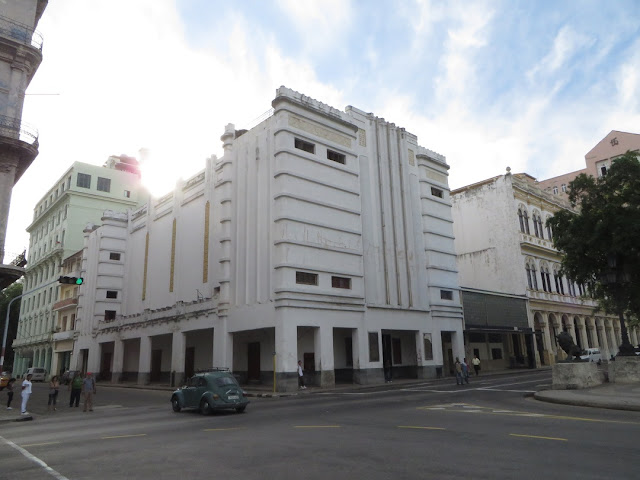 Fausto  -  Prado #201 at the corner of Calle Colon (Habana Vieja) Originally built in 1916, it was remodelled to the excellent example of Art Deco design that you see today in 1938. It was the first air-conditioned theatre in Cuba and had a capacity for 1,640 viewers. No longer in use today. 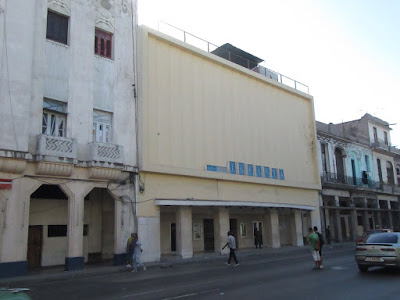 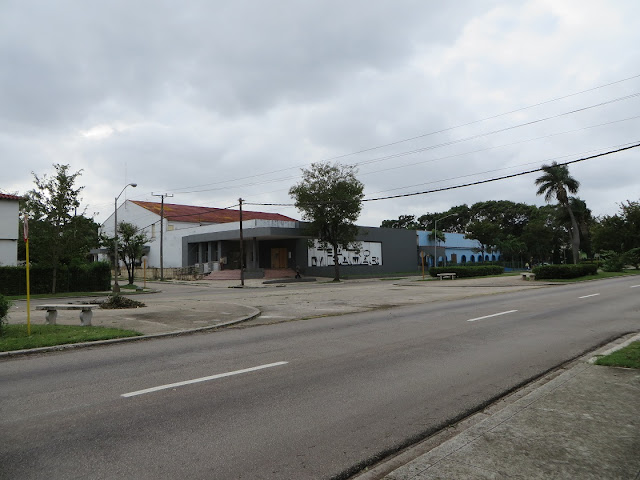 Miramar  -  At the corner of Calle 5ta y Calle 82 (Miramar) It was constructed specifically for use as a movie theater in 1948 with 950 seats. Several years ago a Jazz Club was opened in one part of the building while live performances of some kind were still going on at the theater side. I watched a jazz band play here several years ago...food was available, edible but not great, the wine prices were reasonable....no smoking allowed. 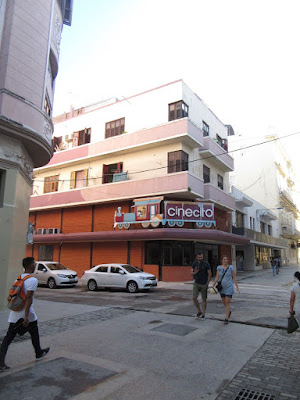 Cinecito  -  San Rafael #6 esq. Calle Consulado (Centro Habana) In 1919 a movie theater existed here that went by the name 'Nueva Inglaterra' with a 150 seat capacity. It was renovated in 1940 and expanded it's capacity to 205. The name was changed to 'Periodico Resumen' in 1942 and changed it's screenings to Short Stories, News and Animation. It changed it's name once again in 1951 to the current one and was given a face-lift during the 1960's. It's still in use today showing films exclusively for children. 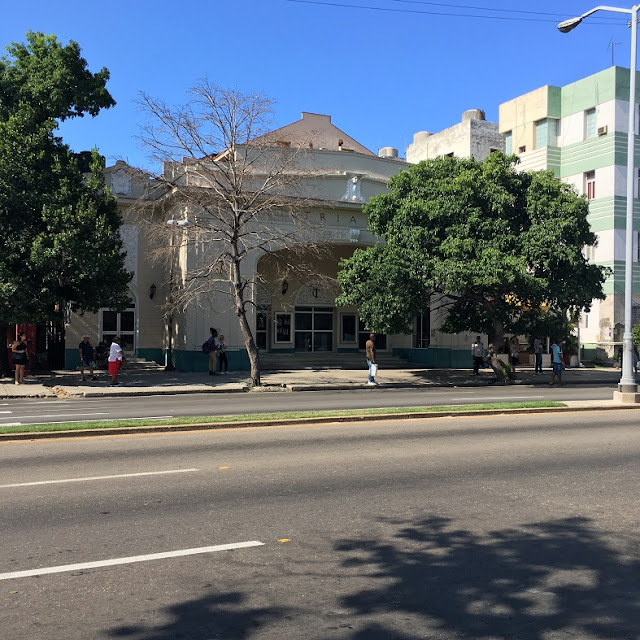 Trianon  -  Calle Linea #706 e/ A y Paseo (Vedado) It opened it's doors in 1920 as an open air movie theater. It's not sure when it received it's roof but It was completely re-modeled in 1955. Today it shows movies on week days and live theater on the weekends. Today it has a capacity of 1100 seats. 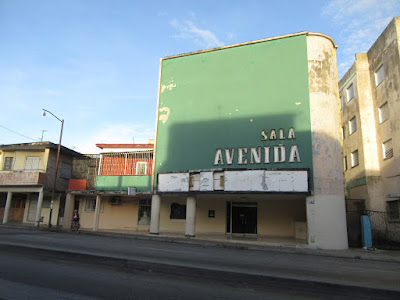 Avenida  -  Avenida 41 #5615 e/ 56 y 58 (Playa) In 1946 a movie theater was built on this space and expanded a year later to hold 1000 seats. There was nothing written on the marquee but it looked like something was going on inside when I took this picture. I read somewhere that concerts were being held here. 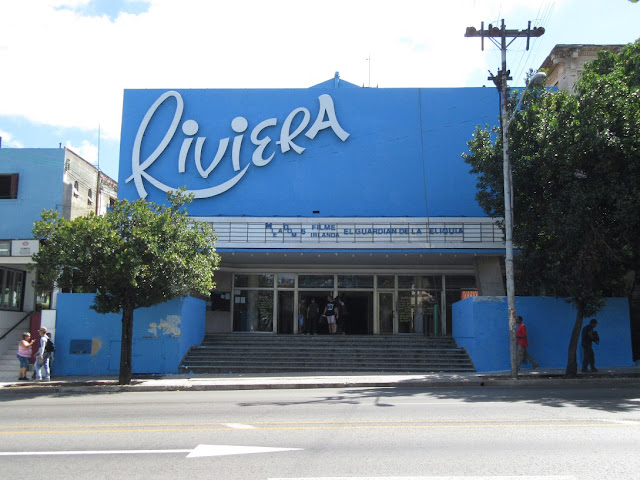 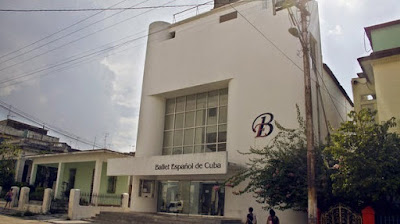 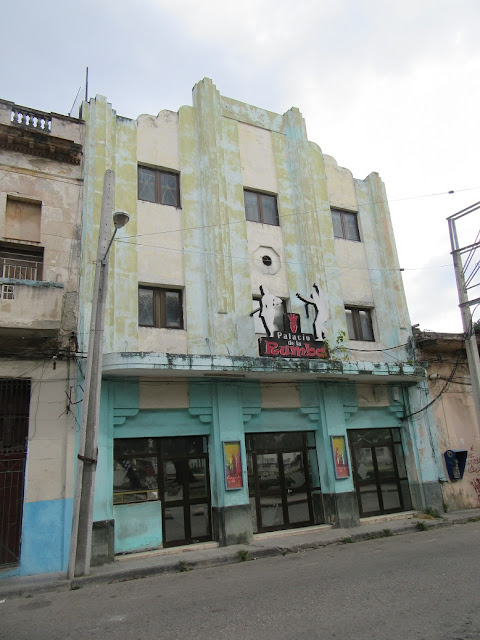 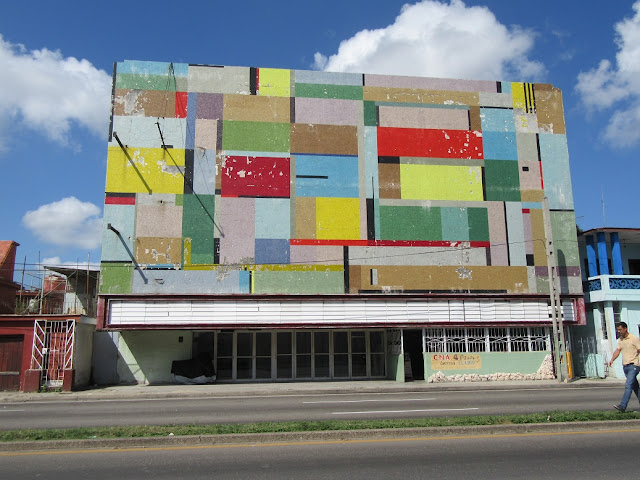