As movie theaters expanded outwards to other municipalities they also moved into the Havana neighborhoods creating the local cinema. Believe it or not, just before 1959, Havana City had over 130 cinemas containing an estimated 136,000 movie seats, more than New York city or Paris. Actually, according to statistical data, Havana had more cinemas than any other big cities of the world. You would be hard pressed to believe that seeing the condition (or non-condition) of the existing cinemas today. Only a small fraction of cinemas that were once available to the population exist or operate today. If you were born in Havana in the 50's or early 60's you have a memory of a neighborhood cinema that you went to when you were a child. My wife speaks of a few that she attended as a child that either no longer exist due to deterioration or the buildings are now used for a different purpose. You wouldn't otherwise have known a movie theater ever existed there if you hadn't gone there decades previously. The prices were lower at these neighborhood cinemas and many entire families would attend.
Some of the larger and better known movie theaters had contracts with production companies such as Metro Goldwyn Meyer, Columbia, and the 20th Century Fox. Today's Yara was operated by Warner Bros. at one time. Paramount was the first to move to Havana, in 1916, followed by Twentieth Century Fox (1918), United Artists (1921), MGM (1923), Warner Bros. (1925), Columbia (1931), and, finally, RKO (1939). During the 1920s, U.S. films dominated an estimated 95 percent of all movie screens in Havana. Even though it declined during the next few decades, it never fell below 75%.
After the revolution it became too costly to operate all the existing cinemas with the state budget that was available. One by one the cinemas were either shut down completely and abandoned or used for something else like community services, live theaters or dance schools. All the pictures posted were taken by me with the exception of one. In the future I will concentrate on movie theaters that were located in municipalities outside the Havana center and with time expand to other parts of the country. 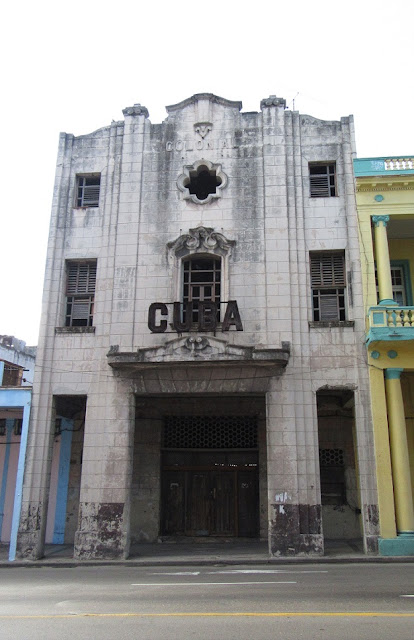 Calle Reina #107 e/ Campanario y Lealtad (Centro Habana) Was built with 900 seats within a space that already existed. Today it's closed. This is one of my favorite movie theater buildings, along with the next one. 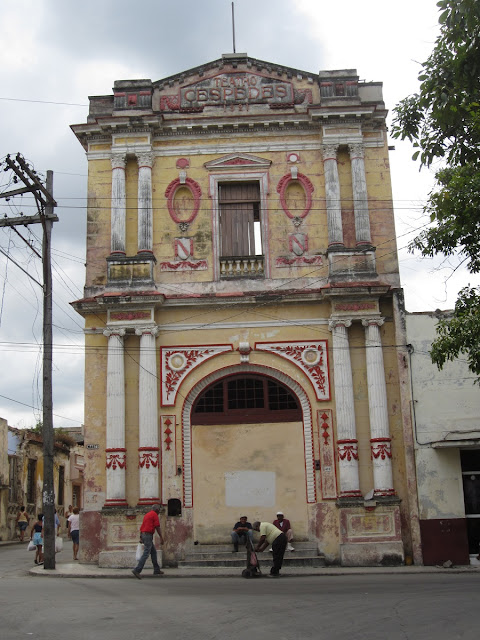 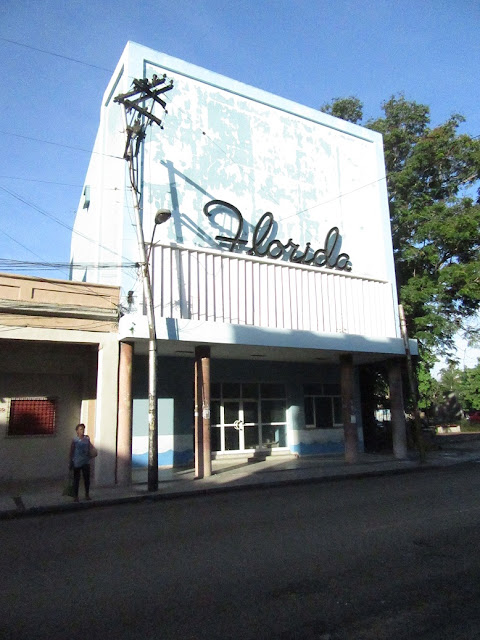 Florida  -  Calzada de Diez de Octubre #216 esq. Via Blanca (Santo Suarez) Built in 1949 for the purpose of a movie theater. Today it's home to a traditional dance company. 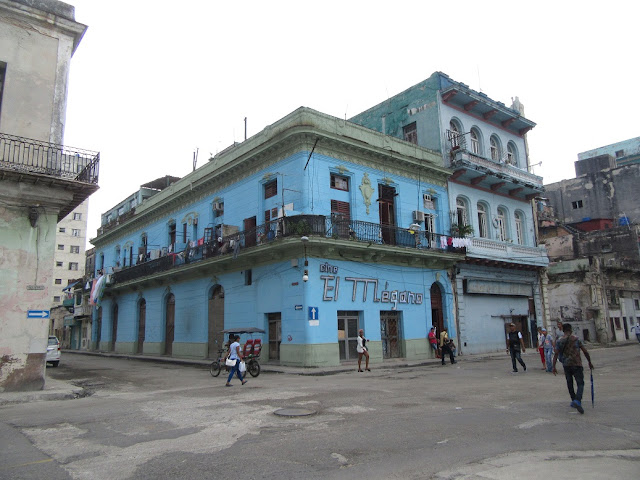 El Megano  -  Corner of Calle Industria y San Martin (Centro Habana) A house was built here in 1919 and converted to movie theater with 450 seats in 1921 named Lira. Name changed to 'Capri' before becoming 'El Megano'. I've been walking by this building on my way to the Partagas LCDH behind the Capitolio for years....it's always been closed. 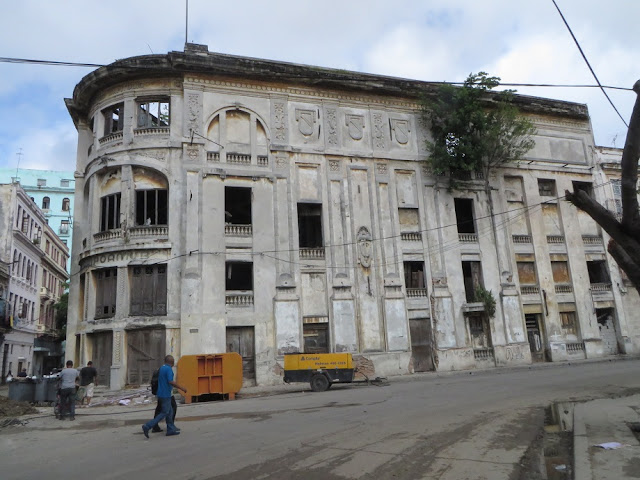 Capitolio  -  Calle Industria #411 esq. San Jose (Habana Vieja) Opened in 1921 with 1082 seats and changed it's name to Campoamor before closing down. This picture is a few years old, if you see it now the building has deteriorated further and the ground floor is all boarded up. It's directly behind the Gran Teatro. 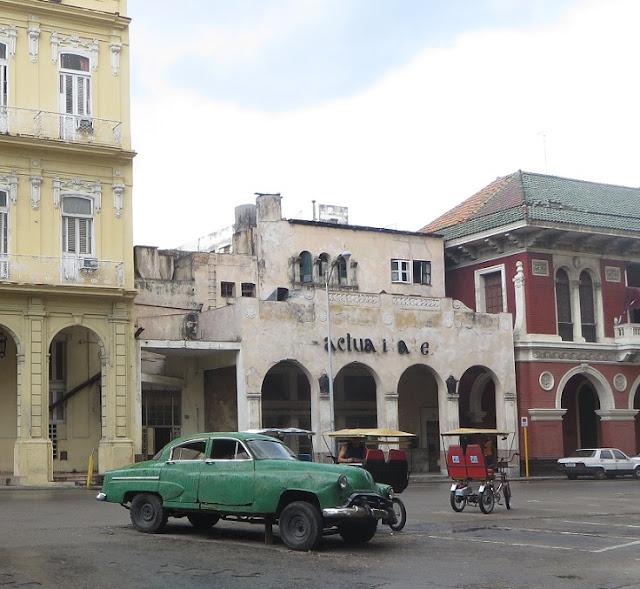 Actualidades  -  Calle Monserrate #262 e/ Neptuno y Animas (Habana Vieja) Many believe that this was the first movie theater built for the sole purpose of showing movies in 1906. With 1700 seats, it's currently closed. 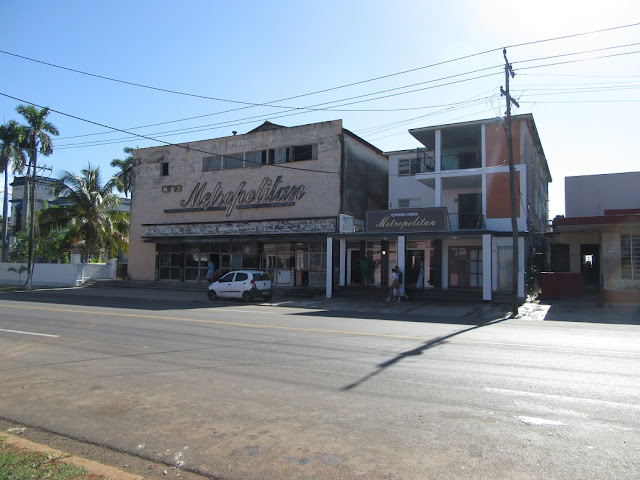 Metropolitan  -  Avenida 13 e/ 76 y 78 (Playa) Built in 1945 it's currently closed, although it looks like something is going on inside. There's a restaurant open in the adjacent building and there are a couple of existing apartments in the upper floors. 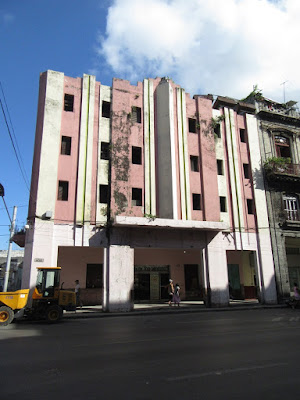 Reina  -  Calle Reina esq. Rayo (Centro Habana) Opened in 1936 with 1,570 seats, today it's closed as a movie theater. Until recently it was being used as a dance school by Tony Menéndez: Cuban dancer and choreographer.

Aguila de Oro  -  Steps from Avenida Zanja at Rayo #108 (Centro Habana) Located in the Chinatown district of Havana, the Cine Aguila de Oro opened with 900 seats and screened Kung-Fu and Japanese films. It had closed in 2016 but has recently reopened as an art gallery. 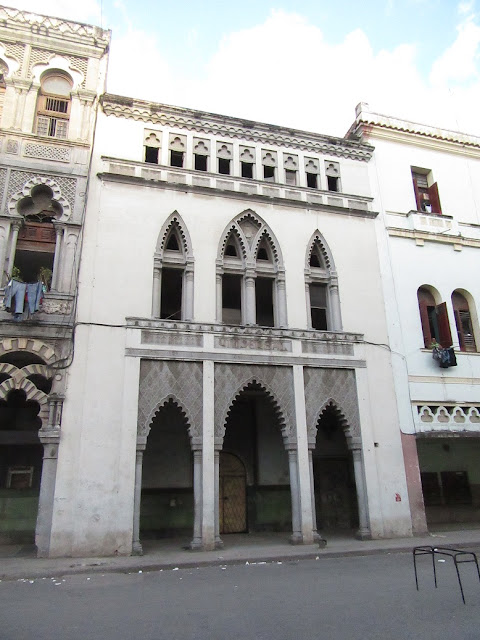 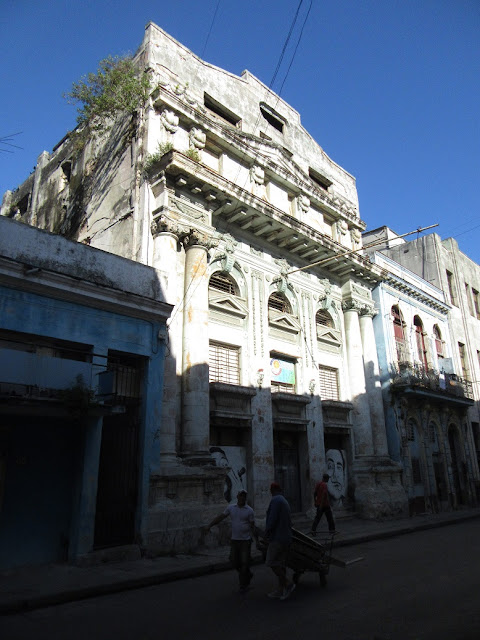 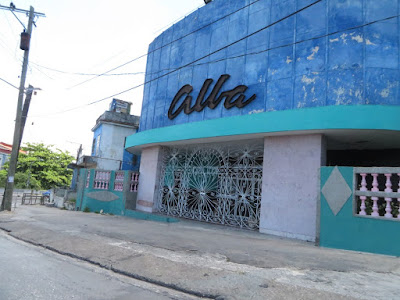 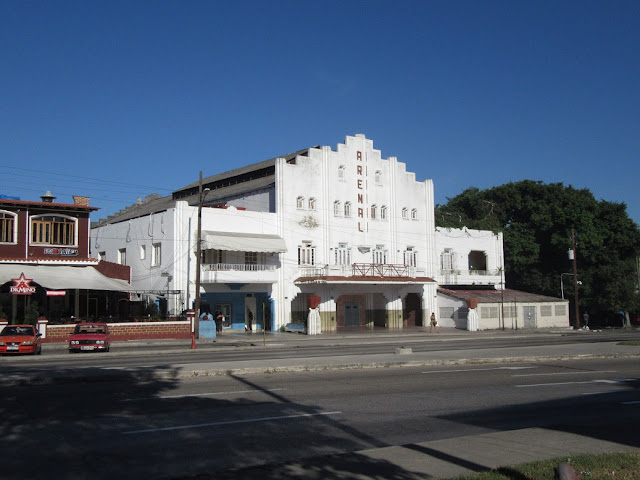 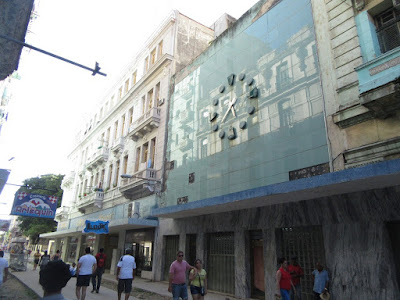 Rex  -  Calle San Rafael #161 e/ Industria y Amistad (Centro Habana) Opened in July 1938 with seating for 650 on a single floor. For many years it operated as a newsreel & short subjects theater. In late 1947, the Cine Duplex opened adjacent to the Rex Cinema, and they shared the same foyer. It's currently closed. 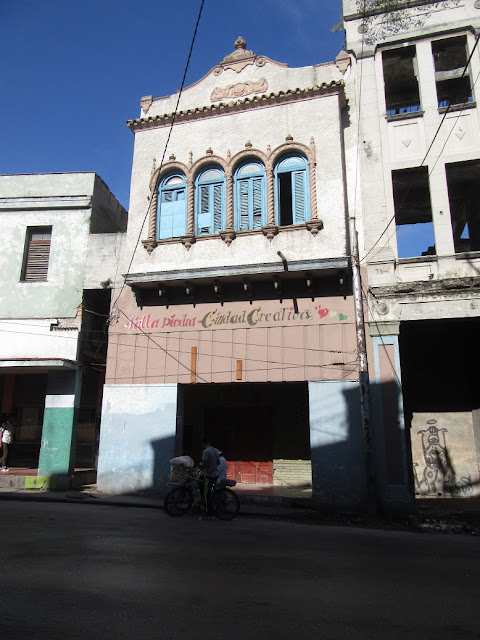 Esmeralda  -  Calle Monte #818 esq. Arroyo (Centro Habana) This was a house built in 1908 that was converted to a movie theater with 700 seats in 1925. It's currently closed, although it does look like something is going on inside. 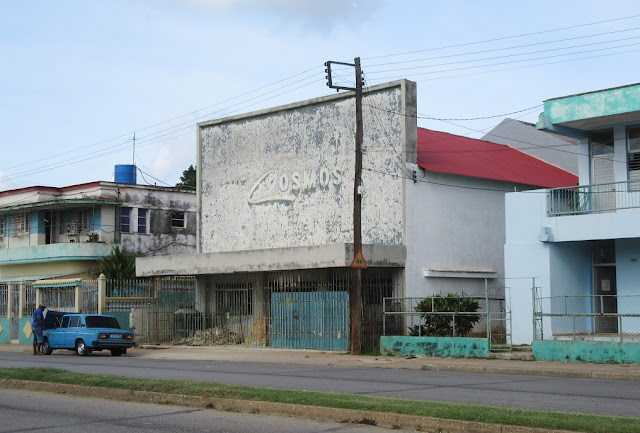 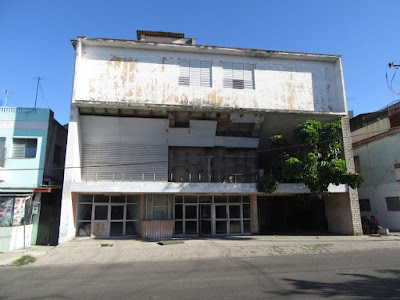 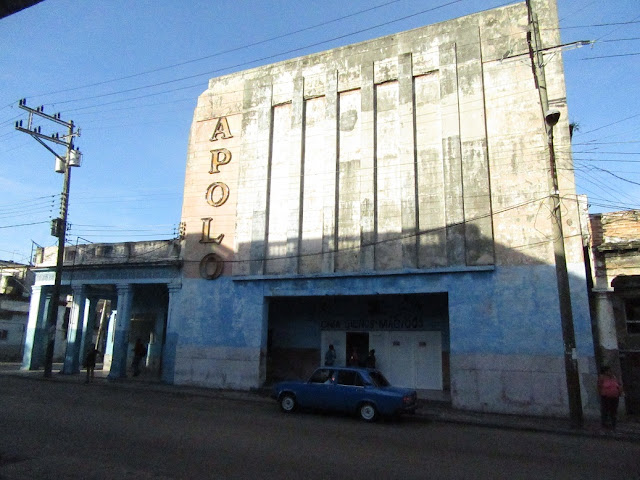 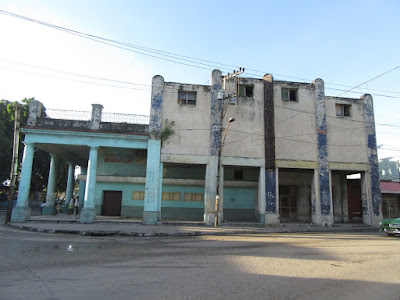 Maravillas  -  Corner or Calzada de Cerro y Calle Palatino (El Cerro) Built in 1926 and was renovated at some point within a couple of decades. It's not in use as a movie theater today but I saw some kind of local business but I can't be certain that it occupied a part of the theater. It once had 1,200 seats. 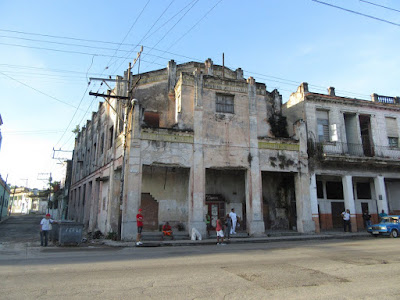 Edison  -  Calzada de Cerro #1951 esq. Calle Zaragoza (El Cerro) Built in 1938 with 800 seats, it's currently closed as a cinema but I saw a sign on the door giving me the impression something is going on within it's walls. 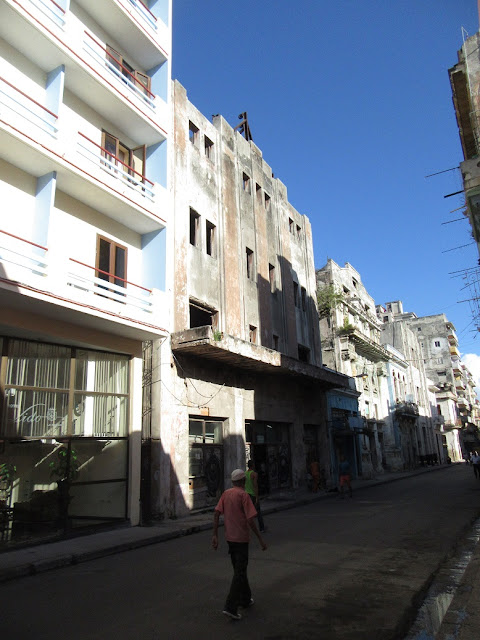 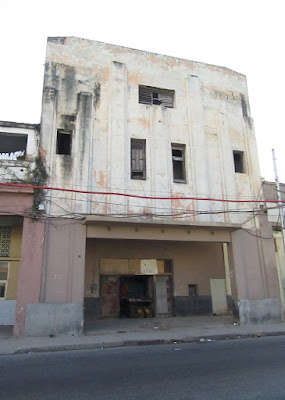 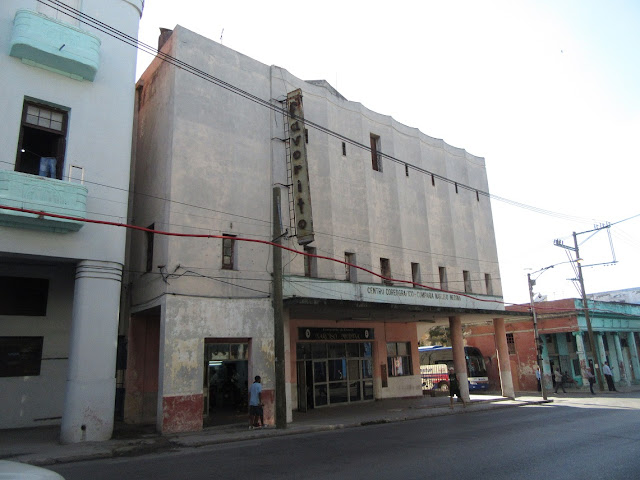 Favorito  -  Calle Belascoain #809 esq. Calle Penalver (Centro Habana) Built in 1938 with 1,528 seats, today a big part of is being used by the 'Narisco Medina Dance Company' and a small part for a barber shop. 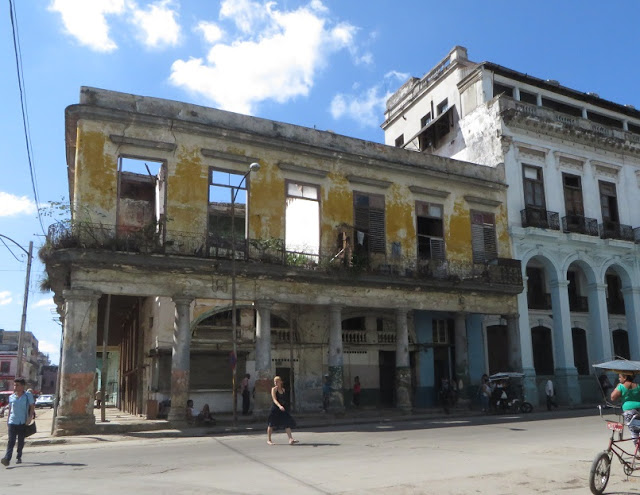 Belgica  -  Calle Egido esq. Calle Corrales (Habana Vieja) It was originally built as a house by the Catholic church and converted to a movie theater in 1932 with 750 seats. A large chunk of the upper floor has collapsed. It seems that someone is still living there, maybe not any longer, and there was some kind of business operating downstairs. However, this might have changed, it's no longer in use as a cinema, that is for sure. 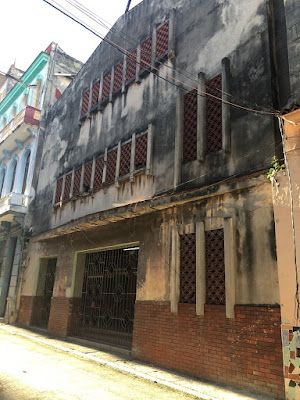 Cervantes  -  Calle Lamparilla #312 e/ Compostela y Habana (Habana Vieja) Built in 1938 with 1,200 seats, today it's being used for community services, it's no longer in use as a cinema. 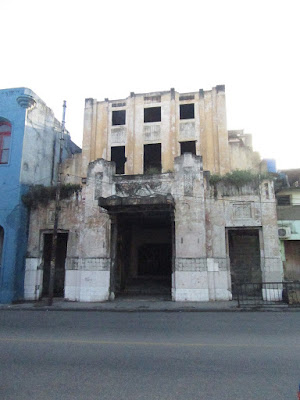 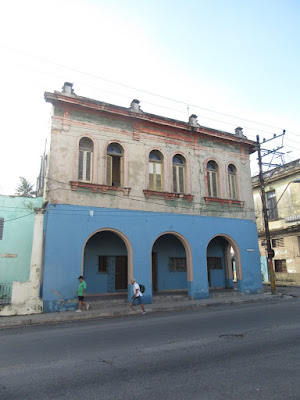 Pricipal  -  Calzada del Cerro #1665 esq. Calle La Rosa (El Cerro) One of two cinemas that go by the same name. It's currently closed as a movie theater but there something going on within the building. It once had 1,080 seats.
Posted by matteocigars at 14:38