If you've been to Cuba and visited a 'La Casa del Habano' or Cigar Shop, have you ever wondered where those beautiful Humidors that they sell come from. Myself, I never really gave it any thought. On my last trip to Cuba I was able to make the trek to Pinar del Rio. While visiting the Cigar Factory there, a friend of mine got a tip on a factory that makes Humidors close by in the city. I didn't know what to expect but of course I had to pay a visit.
I wouldn't have been able to find this place on my own. No street signs and an absolutely horrible road, we all thought the same thing, what the heck are we going to find. We found it, thanks to the help of my friend from Pinar and what a find it was. The location was no reflection on what was going on inside this building.
The factory has been in operation for the last 15 years and is owned by Milan Dominguez. Milan wasn't there on this day, no matter, Miquel was our guide and he spoke several languages, English was one of them. Miquel is the factory's representative or salesperson and travels around the world selling the company's Humidors. He joined us in the showroom which was filled with some beautiful humidors that were either in current production or replicas of a few that were made for some Cigar Festivals in the past. There were also a variety of other objects on display including a table and chairs that was functional but, nonetheless, a work of art. The table was not square or round, it was in the shape of a tobacco leaf and came with 8 chairs. It was very well constructed...solid and only cost $1000 (asking price). It may sound like a lot of money but for the quality of work involved in my opinion it was very reasonable and it was one of a kind.
Our guide was very accommodating and quite knowledgeable. The factory has 6 different departments and 25 employees and Miquel took us through the entire place explaining the entire process. They're independent, not owned by the government, but most of what they make is either sold to Habanos SA or some other government body. They also make a lot of those wooden trinkets that are sold at the flea markets or tourist shops. They can also sell directly to buyers either to someone who visits directly but I also saw larger Humidors being packed for shipping (I don't know what the payment arrangements were). They pay taxes to the gov't based on their sales. All the cedar they use is either from Cuba or Spain but they also use 100 other different types of wood. They have permission to use the Robaina and Montecristo names but I also saw some humidors with the Cohiba name and logo on them. A humidor that can hold about 75 cigars costs approximately $200. The wall pictures, I was told, are not painted, its all done with wood.
This visit was a very nice surprise, especially since I wasn't expecting it. I wish I can tell you it's easy to find and you should go and visit but that's not the case. They would be more than happy to have you come by but it's not the easiest place to find and besides, if you're only spending the day in the area, I'm sure you would prefer to spend all your time visiting the Tobacco plantations. Regardless, the address is listed below and as I said they would be happy to have visitors. Just ask for Miquel. 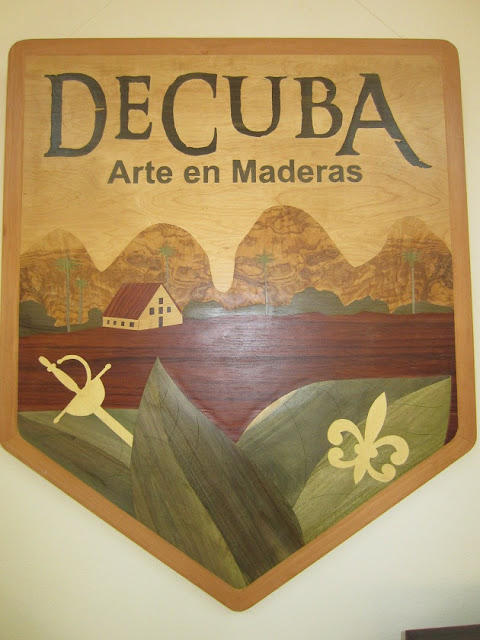 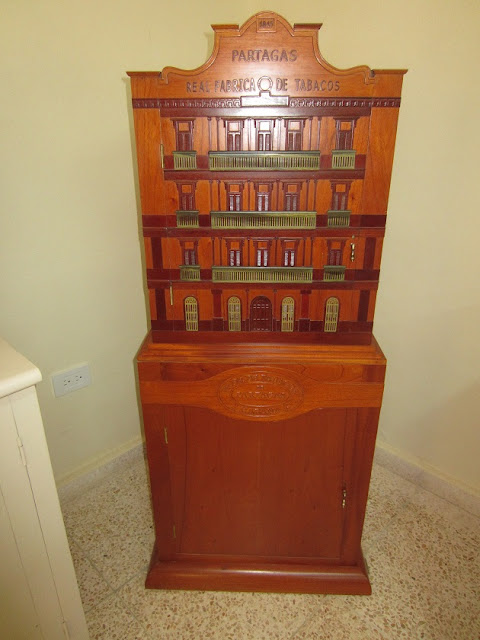 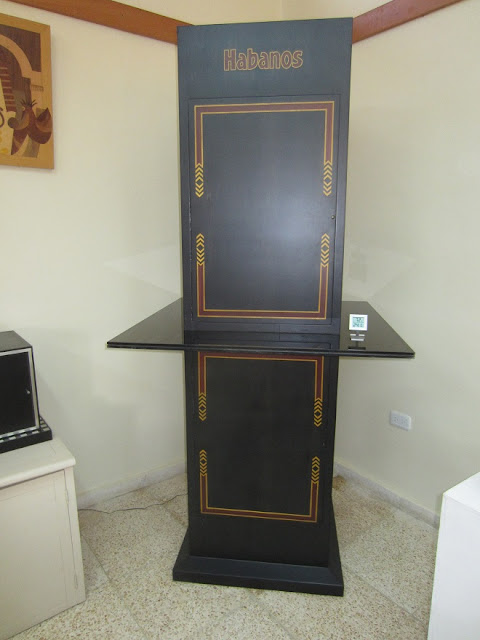 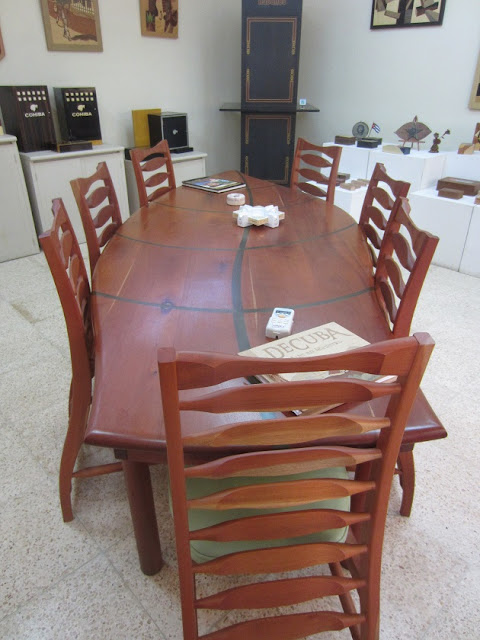 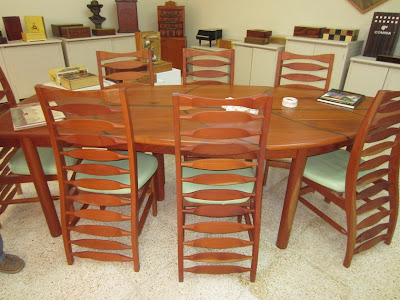 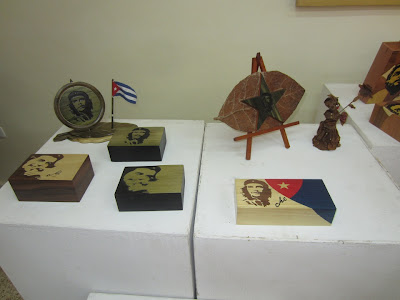 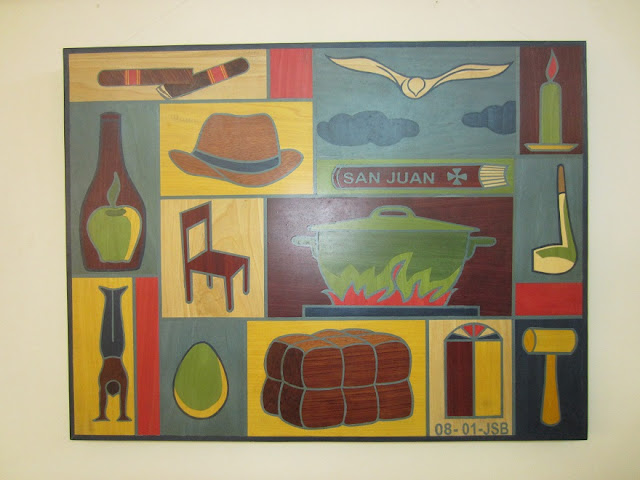 Asking price for this picture above was $200 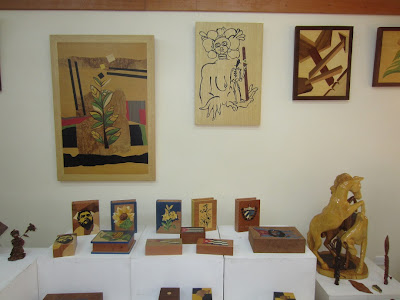 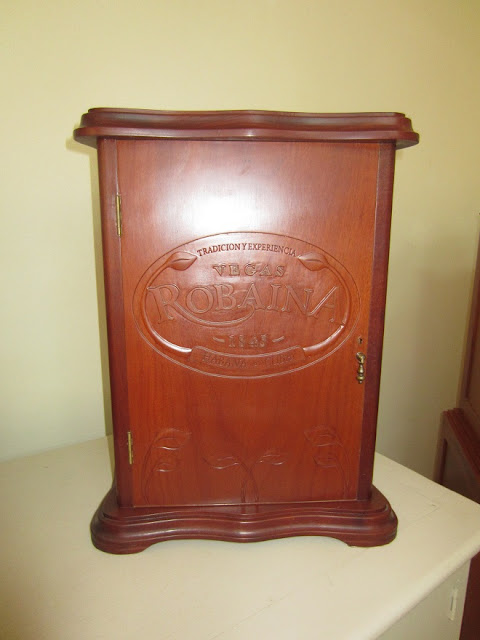 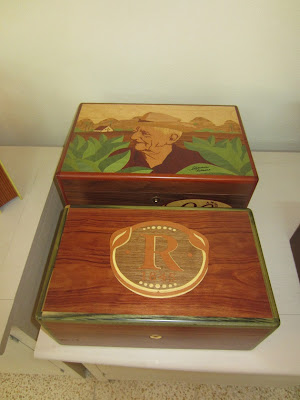 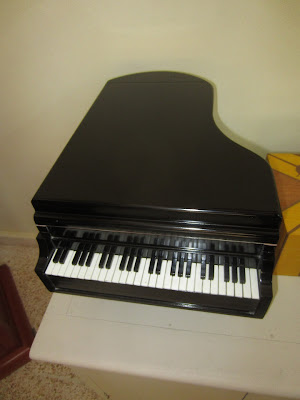 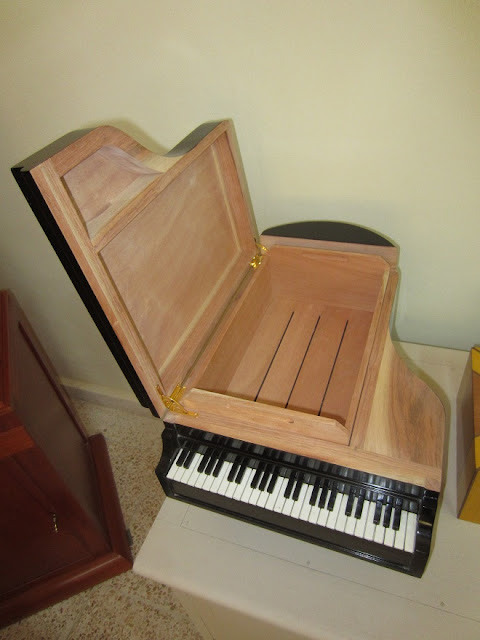 The original Humidor above was made for Chucho Valdes 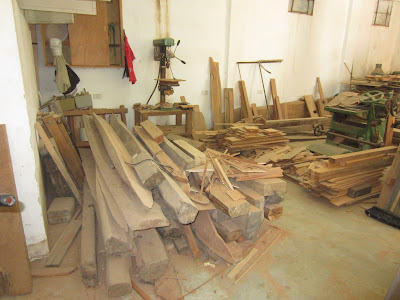 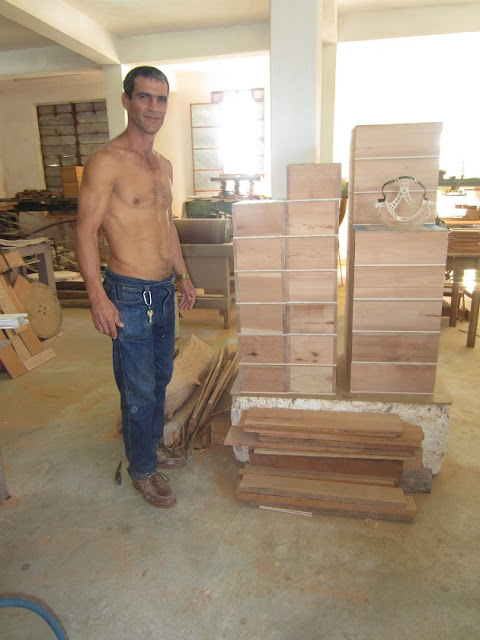 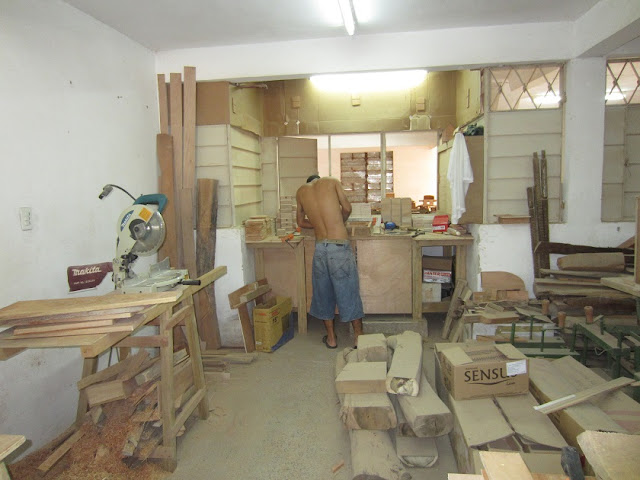 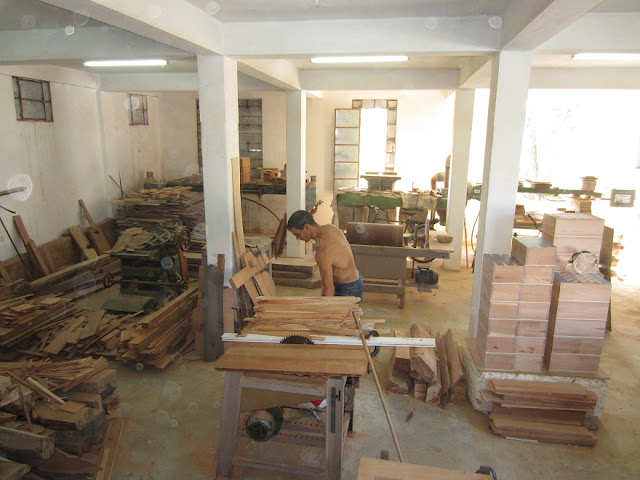 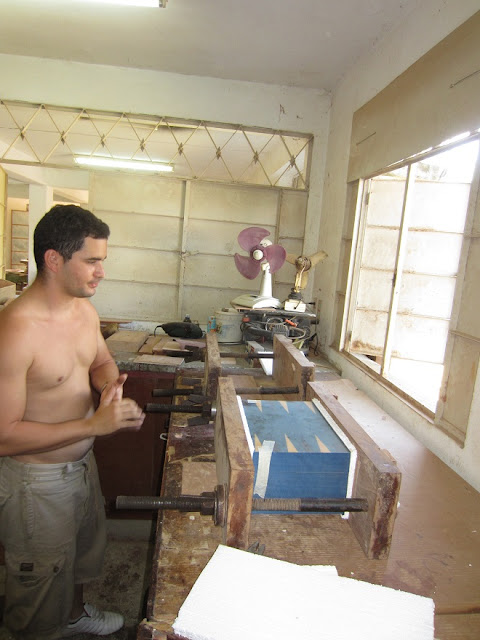 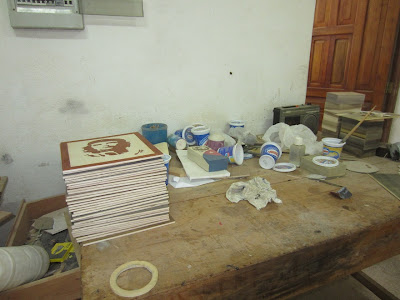 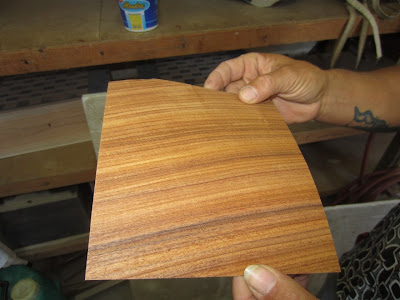 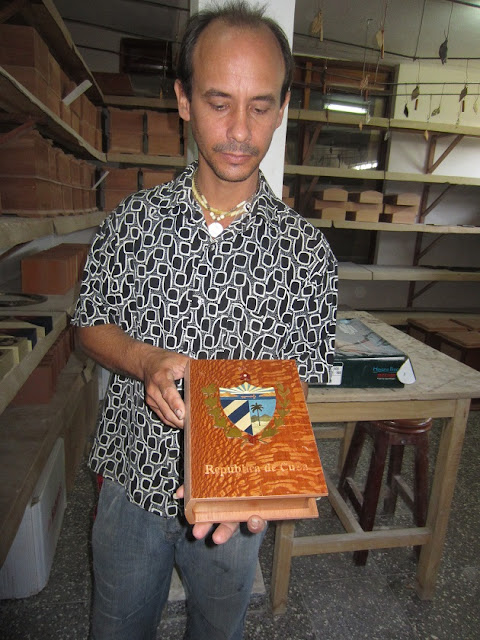 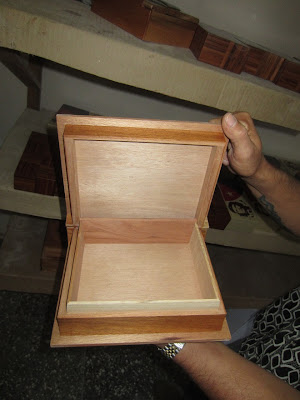 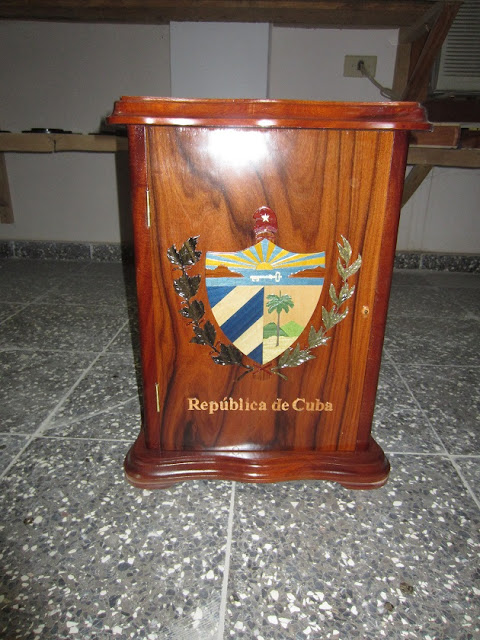 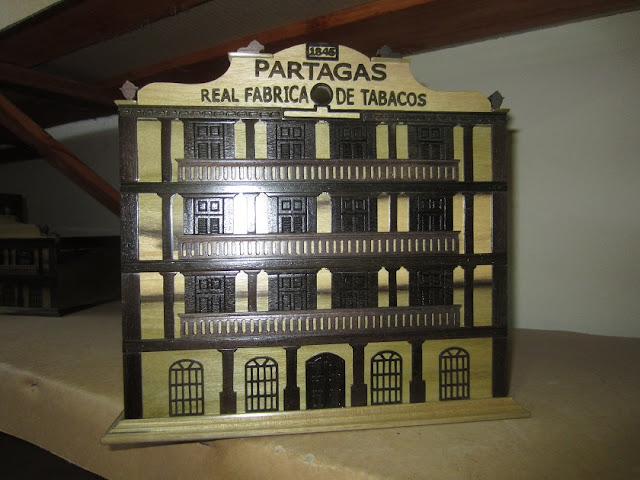 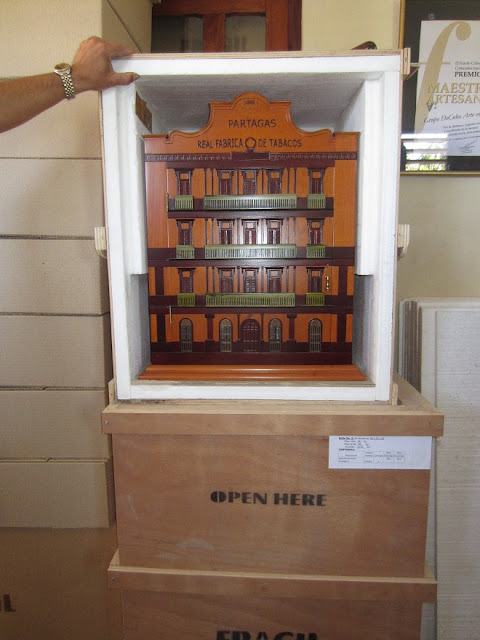 Packed for shipping to Europe
Posted by matteocigars at 09:08