Hotel Plaza turned 100 years old in 2009 and celebrated the event for the entire year. On January 3, 1909, the Plaza Hotel was inaugurated and a charity ball was held for the event on that same day. The ball was attended by the who's who of high society in Havana at the time. During the century that the hotel has been in operation and especially during the 30's and 40's, the Plaza has seen many illustrious guests, including physicist Albert Einstein and US baseball player Babe Ruth. Let me backtrack for a moment....the area where the hotel was eventually built was covered by vegetation in the year 1667. In 1895, the Pedroso family (one of Havana's noble families) built a two floor mansion on the spot where the hotel is now. The building was the seat of the Cuban newspaper Diario de la Marina from 1898 to 1906 and became the Plaza Hotel in 1909. In the 1950's, after several attempts, the hotel was finally granted a licence to operate a casino. After the triumph of the Cuban Revolution in 1959, the building underwent several renovations until its 1991 restoration.
Although many renovations have taken place since that memorable opening, especially during the end of the last century, it still looks a little run down next to it's illustrious neighbors the Hotel Parque Central and the newly opened Gran Hotel Manzana Kempinski....big difference. However, in all fairness to The Plaza, it doesn't try to compete with the aforementioned hotels (priced at CA$356 and CA$639) and is reasonably priced (CA$226 or a little less) considering how high the prices have gone up since the large influx of American tourists. That's not saying that this hotel is a good value, it's just priced cheaper than many. The hotel has three restaurants but the jewel in my opinion is the fifth floor roof garden with spectacular views of the city, which I have yet to visit.
Even-though I have never stayed in this hotel, having read many reviews, it seems to me that this is typical of the older hotels in the city....that is to say that the rooms are small and old. I stayed at the Hotel Inglaterra years ago and it was exactly like that, the room was tiny and bathroom was horrible. Many of the reviews I have read talk about how the amenities were lacking, basic stuff like A/C, water and problems with the shower and/or toilet. Some of the comments were: old and noisy A/Cs, rooms are dated and small, old bathrooms, small beds, empty fridge, no water (1st week of august) and toilets not working. Almost always people talked about how pleasant the staff was. The one very positive aspect of this hotel is it's location, within walking distance to all the major sites in Old Havana surrounded by the Museum of Fine Arts, El Floridita, the Capitolio and Parque Central, with the famous Sloppy Joe's restaurant one block over. There's no denying that the hotel's location is king and I'm sure many people that stay here do it for that reason.
As I wrote earlier, I haven't stayed in this hotel but I have visited a couple of times. They have an abundant lobby with a bar and a number of tables surrounding a fountain. The good news is that they allow cigar smoking, the bad news is that it's not air-conditioned. The pictures below are of the entrance and lobby. 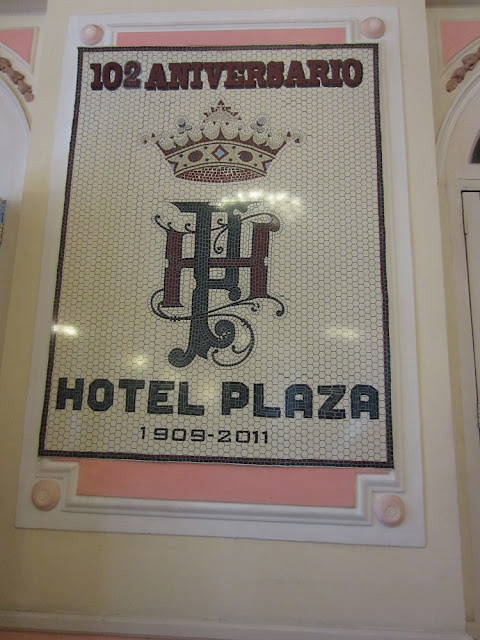 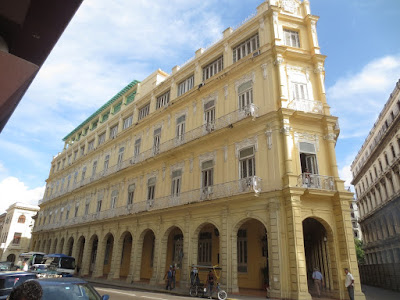 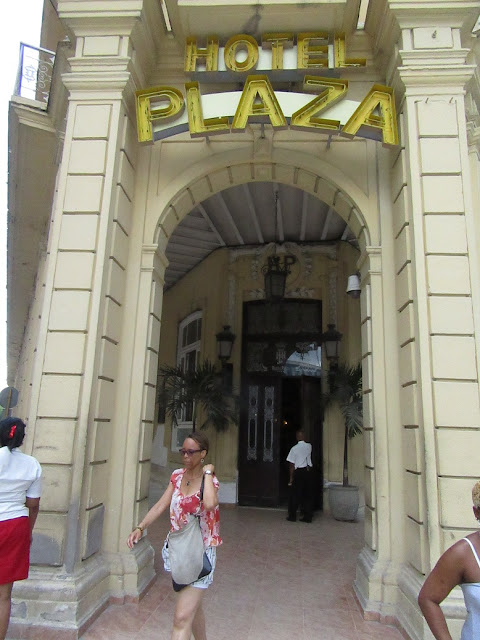 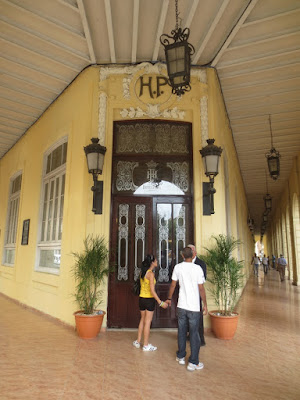 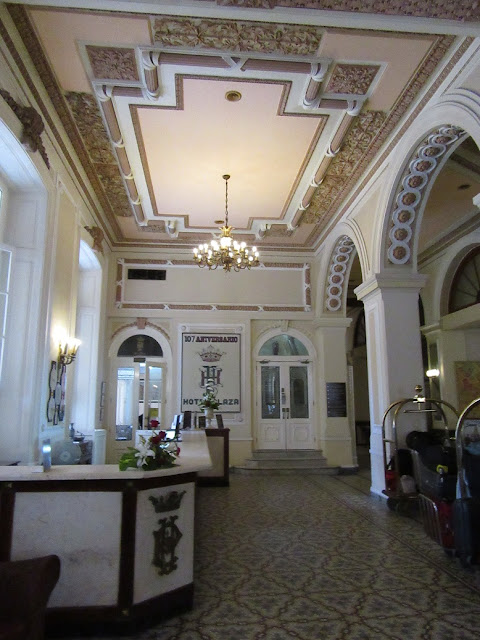 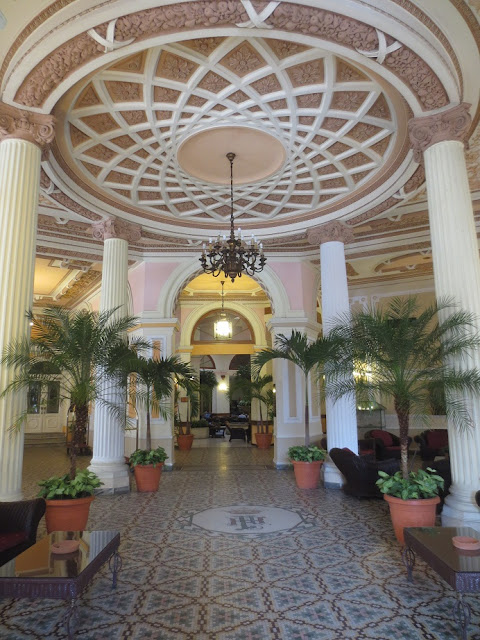 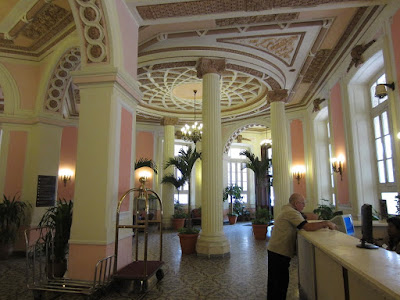 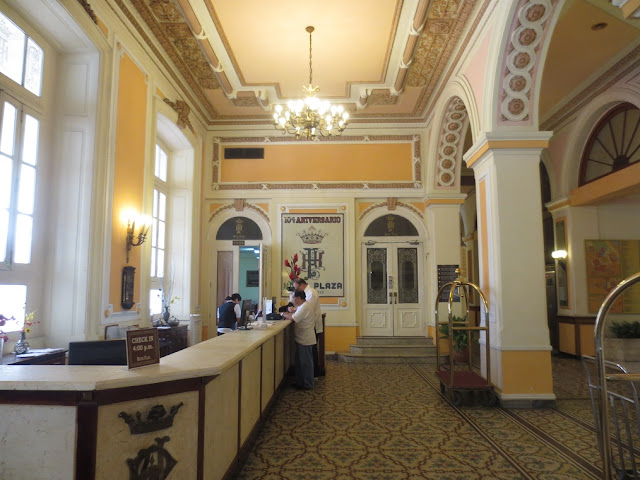 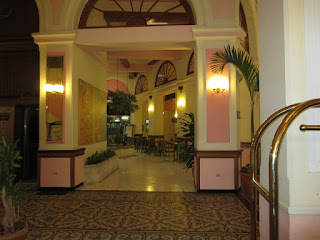 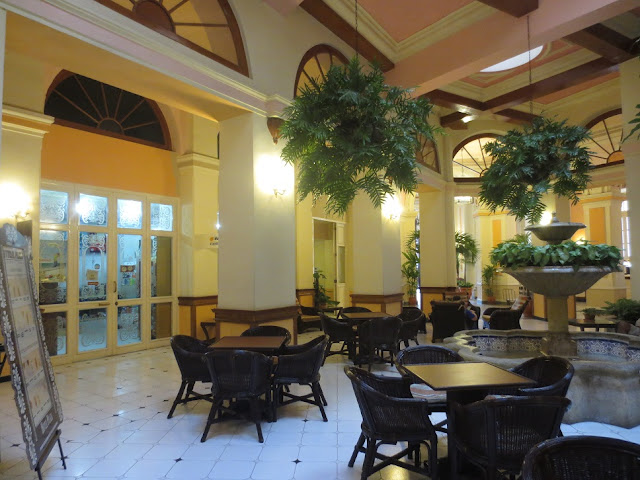 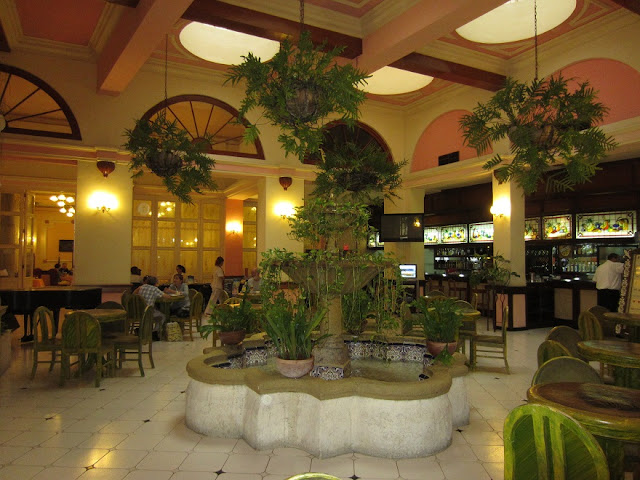 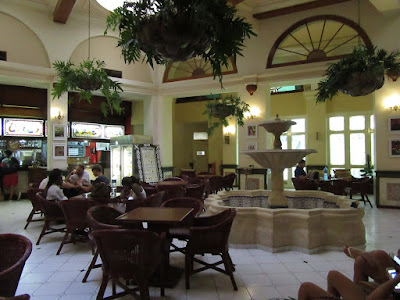 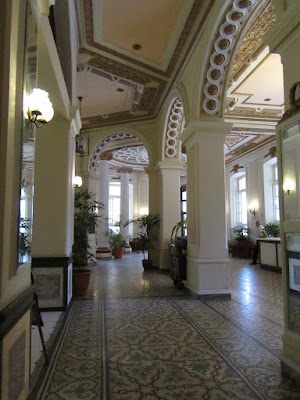 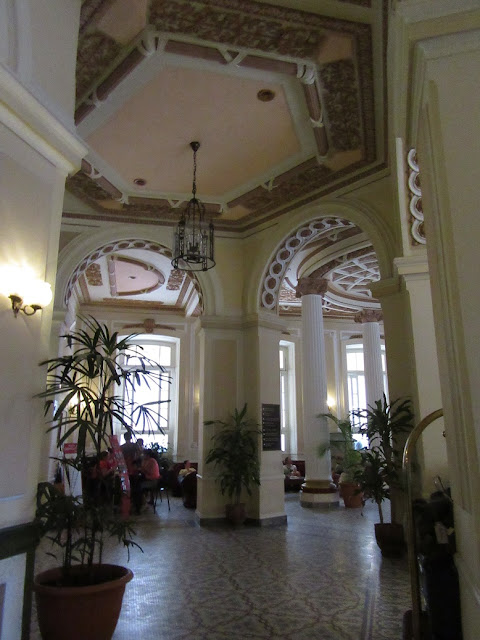 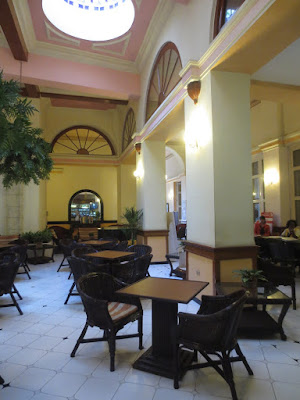 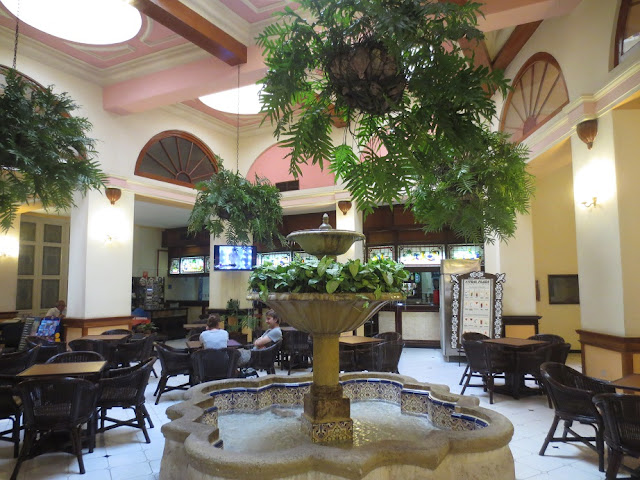 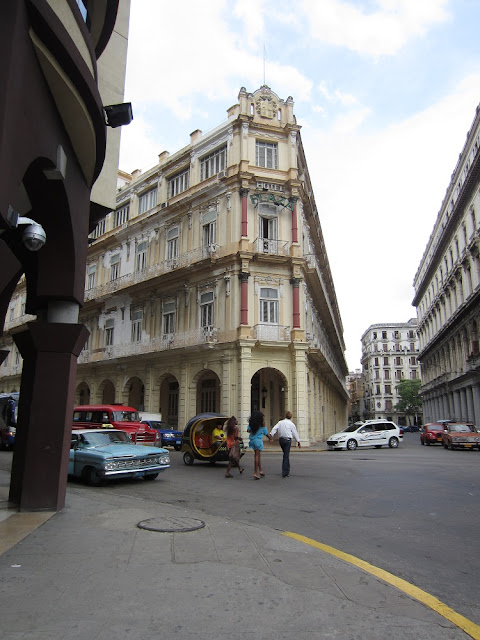 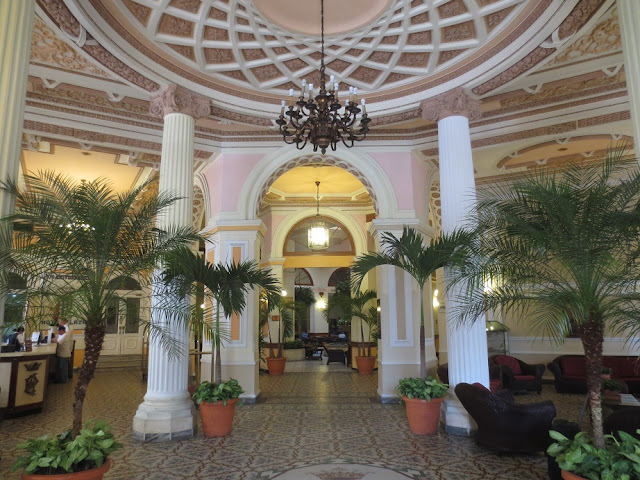