On one of my long walks last year I came across this rather large park dedicated to what was obviously distinguished peoples of Africa. I recognized a couple of the names but most I hadn't heard of. Reading bits and pieces from the different plaques below the busts it became clear that these people had something to do with shaking off the yolk of colonialism in their respective countries. I'm not going to get into Cuba's involvement in Africa and make this political. However, Cuba's involvement in helping several African countries in their struggle for independence is the reason why this park probably exists.
Inaugurated in 2000, this is the only park of it's kind in the world. Some of the busts arrived from their respective countries while others were made in Cuba by Cuban artists and approved by the countries that are represented. When the monuments were revealed it was by a political or governmental leader of their home nation. 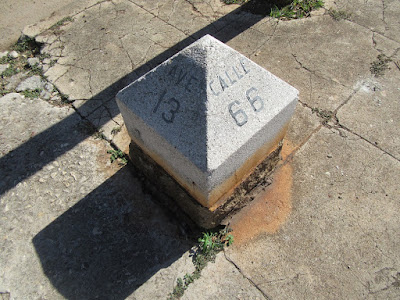 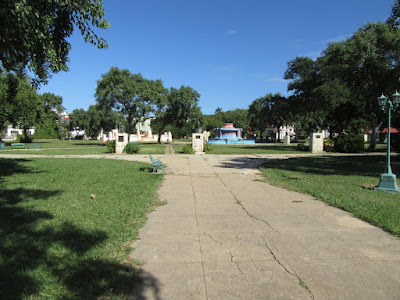 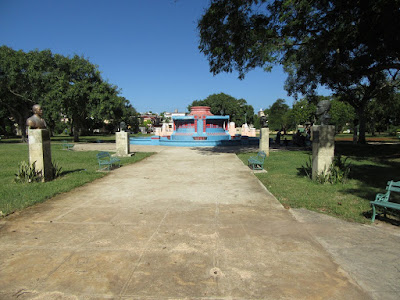 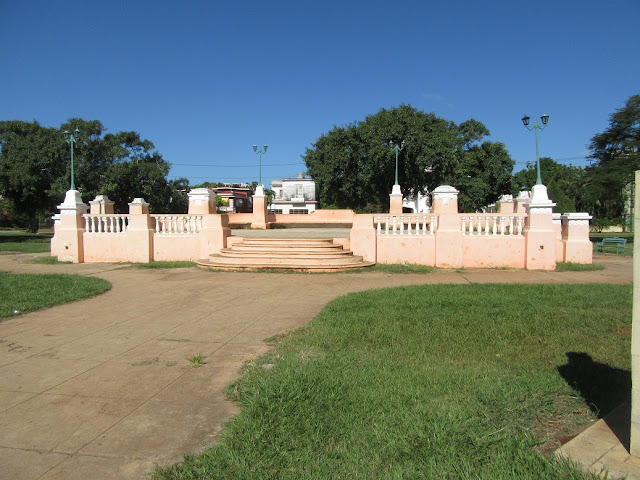 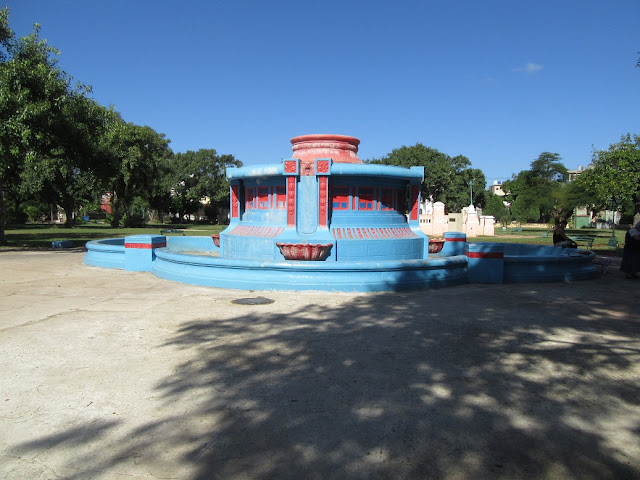 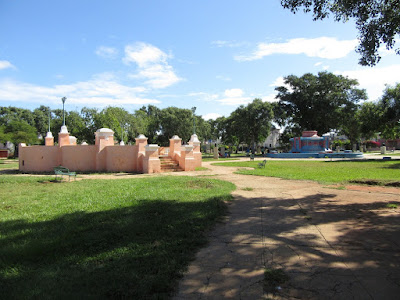 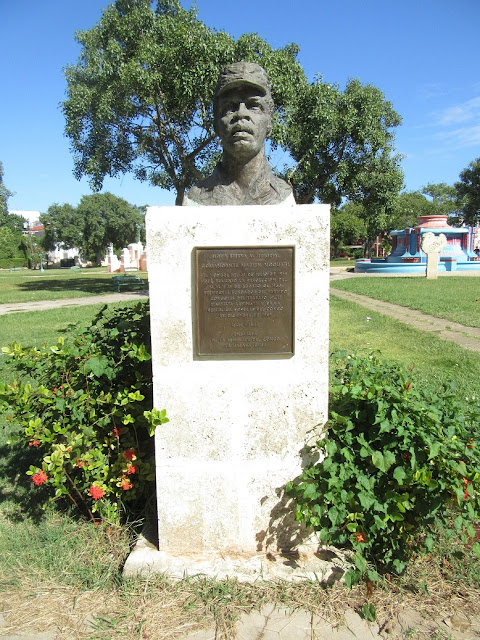 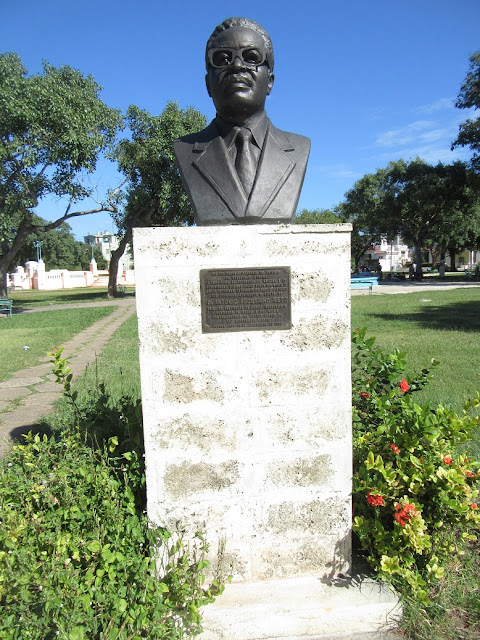 António Agostinho Neto (17 September 1922 – 10 September 1979) served as the 1st President of Angola (1975–1979), having led the Popular Movement for the Liberation of Angola (MPLA) in the war for independence (1961–1974). Until his death, he led the MPLA in the civil war (1975–2002). Known also for his literary activities, he is considered Angola's preeminent poet. His birthday is celebrated as National Heroes' Day, a public holiday in Angola. 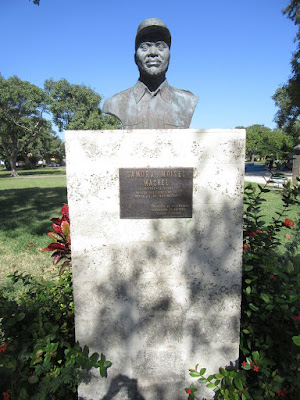 Samora Moisés Machel (29 September 1933 – 19 October 1986) was a Mozambican military commander, politician and revolutionary. A socialist in the tradition of Marxism–Leninism, he served as the first President of Mozambique from the country's independence in 1975. Machel died in office in 1986 when his presidential aircraft crashed near the Mozambique-South Africa border. 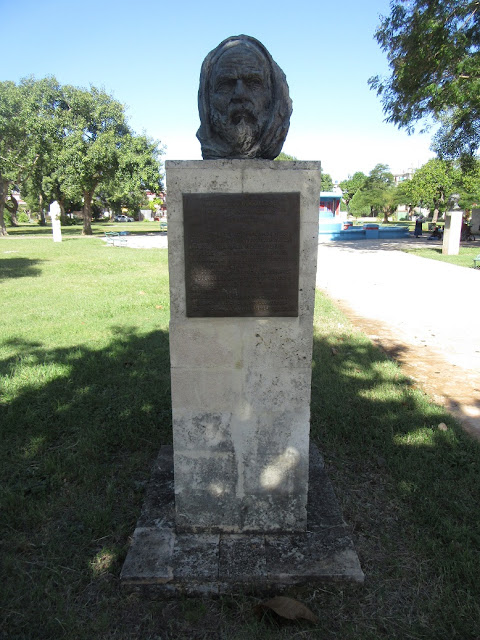 Omar al-Mukhṭār Muḥammad bin Farḥāṭ al-Manifī (20 August 1858 – 16 September 1931), called The Lion of the Desert, known among the colonial Italians as Matari of the Mnifa, was the leader of native resistance in Cyrenaica, currently Eastern Libya under the Senussids, against the Italian colonization of Libya. A teacher-turned-general, Omar was also a prominent figure of the Senussi movement, and he is considered the national hero of Libya and a symbol of resistance in the Arab and Islamic worlds. Beginning in 1911, he organised and, for nearly twenty years, led the Libyan resistance movement against the colonial Italians during the Pacification of Libya. After many attempts, the Italian Armed Forces managed to capture Al-Mukhtar near Solonta and hanged him in 1931. Omar al-Mukhtar also fought against the French colonization of Chad and the British occupation of Egypt. 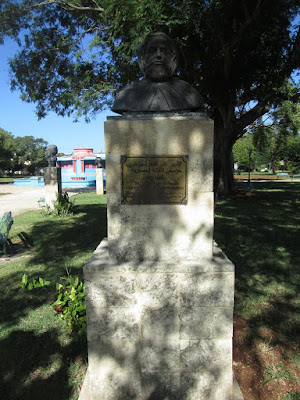 Abdelkader El Djezairi (6 September 1808 – 26 May 1883), was an Algerian religious and military leader who led a struggle against the French colonial invasion in the mid-19th century. An Islamic scholar and Sufi who unexpectedly found himself leading a military campaign, he built up a collection of Algerian tribesmen that for many years successfully held out against one of the most advanced armies in Europe. His consistent regard for what would now be called human rights, especially as regards his Christian opponents, drew widespread admiration, and a crucial intervention to save the Christian community of Damascus from a massacre in 1860 brought honours and awards from around the world. Within Algeria, his efforts to unite the country against French invaders saw him hailed as the "modern Jugurtha" and his ability to combine religious and political authority has led to his being acclaimed as the "Saint among the Princes, the Prince among the Saints". 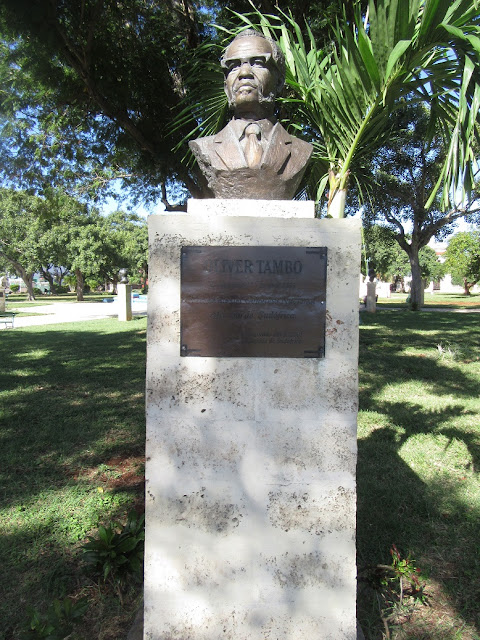 Oliver Reginald Kaizana Tambo (27 October 1917 – 24 April 1993), also known as O. R. Tambo, was a South African anti-apartheid politician and revolutionary who served as President of the African National Congress (ANC) from 1967 to 1991. 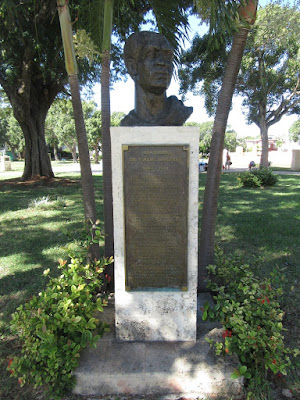 Kwame Nkrumah (21 September 1912 – 27 April 1972) was a Ghanaian politician and revolutionary. He was the first Prime Minister and President of Ghana, having led the Gold Coast to independence from Britain in 1957. An influential advocate of pan-Africanism, Nkrumah was a founding member of the Organisation of African Unity and winner of the Lenin Peace Prize in 1962. 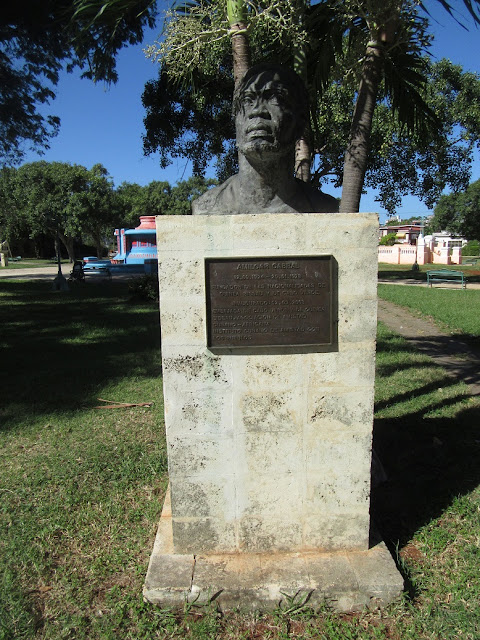 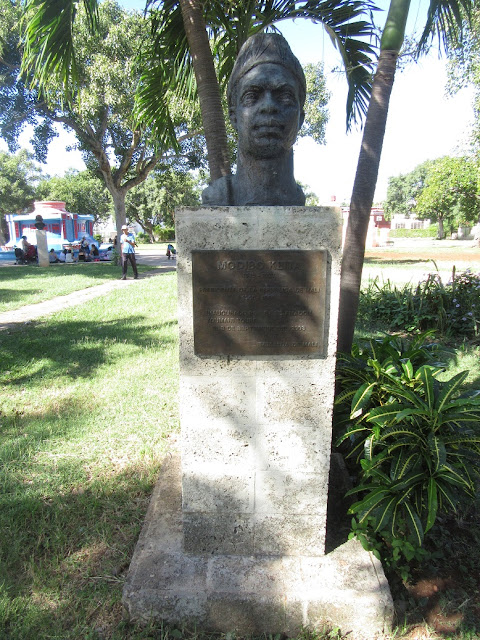 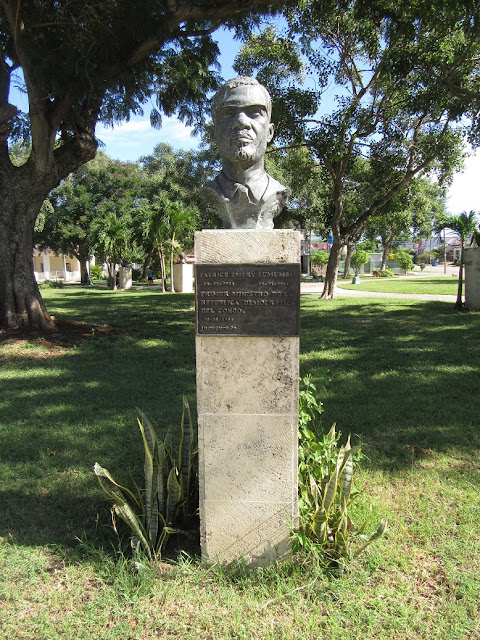 Patrice Émery Lumumba (2 July 1925 – 17 January 1961) was a Congolese politician and independence leader who served as the first Prime Minister of the independent Democratic Republic of the Congo (then Republic of the Congo) from June until September 1960. He played a significant role in the transformation of the Congo from a colony of Belgium into an independent republic. Ideologically an African nationalist and Pan-Africanist, he led the Congolese National Movement (MNC) party from 1958 until his assassination. 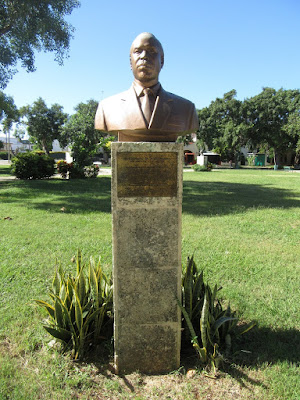 Sir Seretse Goitsebeng Maphiri Khama, GCB, KBE (1 July 1921 – 13 July 1980) was the first President of Botswana, in office from 1966 to 1980. He founded the Botswana Democratic Party in 1962 and became Prime Minister in 1965. In 1966, Botswana gained independence and Khama was elected as its first president. During his presidency, the country underwent rapid economic and social progress. 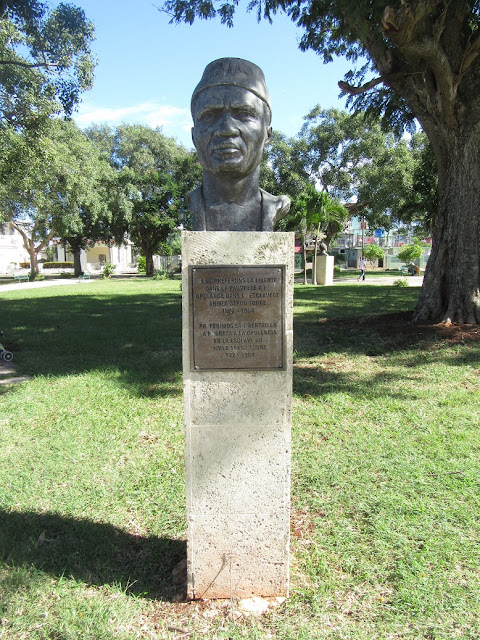 Ahmed Sékou Touré (January 9, 1922 – March 26, 1984) was a Guinean political leader who was the first President of Guinea, serving from 1958 until his death in 1984. Touré was among the primary Guinean nationalists involved in gaining independence of the country from France. 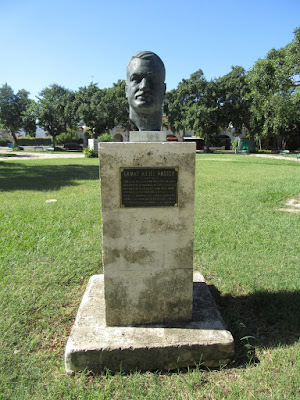 Gamal Abdel Nasser Hussein (15 January 1918 – 28 September 1970) was the second President of Egypt, serving from 1954 until his death in 1970. Nasser led the 1952 overthrow of the monarchy and introduced far-reaching land reforms the following year. Following a 1954 attempt on his life by a Muslim Brotherhood member, he cracked down on the organization, put President Mohamed Naguib under house arrest and assumed executive office. He was formally elected president in June 1956. 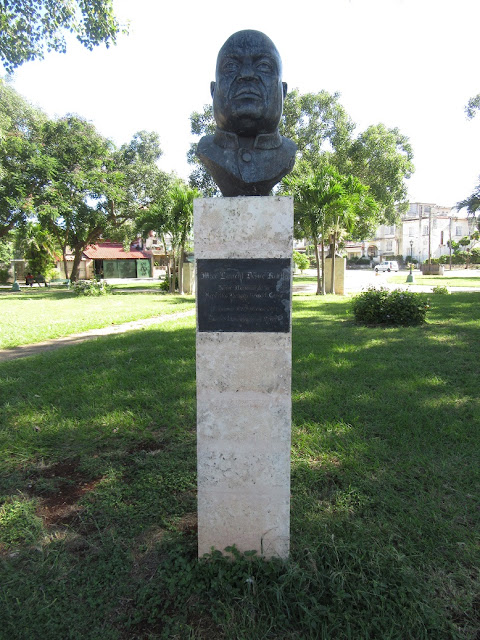 Laurent-Désiré Kabila (November 27, 1939 – January 16, 2001), or simply Laurent Kabila, was a Congolese revolutionary and politician who served as the third President of the Democratic Republic of the Congo from May 17, 1997, when he overthrew Mobutu Sese Seko, until his assassination by one of his bodyguards on January 16, 2001. He was succeeded eight days later by his 29-year-old son Joseph. 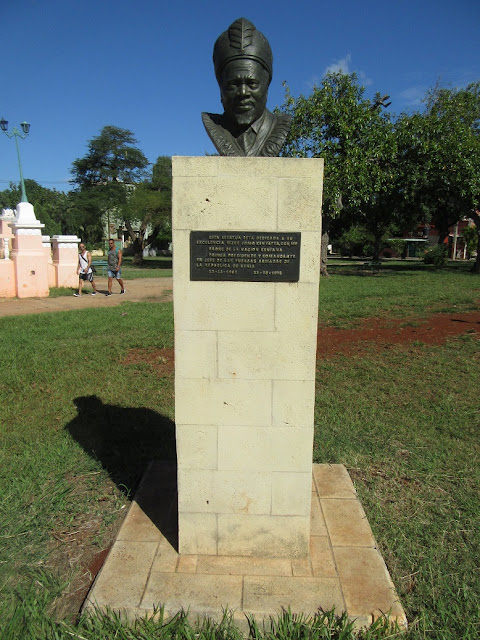 Jomo Kenyatta (c. 1897 – 22 August 1978) was a Kenyan anti-colonial activist and politician who governed Kenya as its Prime Minister from 1963 to 1964 and then as its first President from 1964 to his death in 1978. He was the country's first indigenous head of government and played a significant role in the transformation of Kenya from a colony of the British Empire into an independent republic. Ideologically an African nationalist and conservative, he led the Kenya African National Union (KANU) party from 1961 until his death. 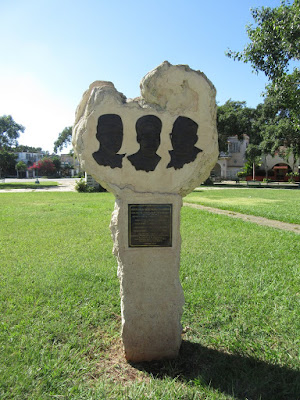 Chief Obafemi Jeremiah Oyeniyi Awolowo, GCFR (6 March 1909 – 9 May 1987), was a Nigerian nationalist and statesman who played a key role in Nigeria's independence movement, the First and Second Republics and the Civil War.

Abubakar Tafawa Balewa, KBE PC (December 1912 – 15 January 1966) was a Nigerian politician, and the first prime minister of an independent Nigeria.

Nnamdi Azikiwe, PC (16 November 1904 – 11 May 1996), usually referred to as "Zik", was a Nigerian statesman who was Governor General of Nigeria from 1960 to 1963 and the first President of Nigeria from 1963 to 1966 (when Nigeria became a republic). Considered a driving force behind the nation's independence, he came to be known as the "father of Nigerian Nationalism". 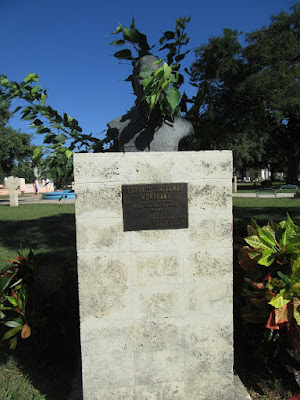 Eduardo Chivambo Mondlane (20 June 1920 – 3 February 1969) served as the founding President of the Mozambican Liberation Front (FRELIMO) from 1962, the year that FRELIMO was founded in Tanzania, until his assassination in 1969. He was an anthropologist by profession but worked as a history and sociology professor at Syracuse University.
Posted by matteocigars at 09:03