I've loved this place from the first time I stepped foot in it a long time ago and like it even more now that my old friend Carlos Robaina is there overseeing the goings-on. Carlos is the PR man in the shop and restaurant and is always ready with a handshake and a bear hug. I met Carlos many years ago on my first visit to the Robaina farm, he too was visiting that day having renounced farm life for the city many years before that. This was when his father Alejandro was still alive, Carlos was visiting, like me.We hit if off right from the beginning and have been friends ever since.
He's only been at the 5ta for a few years but in my opinion is a welcomed addition. I almost always drop by when I'm in town, I say almost because when I go by I have to make it for a few hours and take in the whole experience. The whole experience includes a meal in the back room and of course a sit-down with Carlos to catch up on whats been going on in the lives of my Cuban friends. If  I can't go by for at least a couple of hours, I usually don't go by at all. It hurts to stay for just a few minutes. After my meal I like to sit down with Carlos for an hour or so and smoke one of the fine cigars rolled by the expert (and lovely) house roller Maria while I sip a couple of Santiago de Cuba Rums. This time I decided to ask a few specific questions and jot some things down. It was time I did some kind of interview with the famous Carlos Robaina who just happened to be a friend as well.
Carlos was born in San Luis, Pinar del Rio on April 22, 1951. He went to school on the farm until his seventh grade where he then went to school not far from the farm in the town of San Luis. Of course during this time he also had chores to do on the farm such as feeding the pigs....even after he went to school in San Luis. It wasn't until he was 18 years of age that he left the farm to go to school in Havana. In 1976 he even went to study metals in Japan. He eventually married and besides Hiroshi had a daughter as well who died in 1997. Hiroshi would later name one of his daughters after his sister that passed away, something that both pleased Carlos and brought back some deep felt emotions. When he finished school in 1975 he went to work in a factory in Havana for 20 years.

Q. What would you say is the most beautiful place in Cuba Carlos?
A. The Robaina farm.

Q. Other than the cigar's from your family's farm and the Robaina Factory Rolls, what are some of your favourite cigars?
A. I like some cigars from Nicaragua and the Dominican Republic as well as the Cohiba Behike 52 & Siglo VI and Trinidad Robusto Extra.

Q. Who is the most famous person who's shopped in the store since you've been here?
A. The tallest person in the world....a Turkish guy.

Q. If you could smoke a cigar with 3 people dead or alive, who would they be?
A. Che Guevara, Fidel Castro and my father.

Q. How often do you visit the family farm?
A. At least once every 2 weeks. The friends I have out there are real.

Q. How many cigars do you smoke a day?
A. I smoke about 2 cigars per day but I smoke cigarettes as well.


It seemed to me that after all the years that have passed, the dying of his father, the farm going to his son and everything inbetween....father and son have a good relationship. I have found Carlos on the farm on several occasions and have always seen him in a good mood. While I was visiting him at 5ta and specifically while interviewing him, he was texting with his son Hiroshi at the farm. I can't tell you the words exactly but I can tell you I saw a lot of love there. It seems to me that Carlos has no regrets about the choices he's made in his life and is quite happy being exactly where he is. I for one am happy he's right here almost within walking distance from where I always stay. It's nice to know that when I want to spend some time with an old friend, he's not too far away.
As far as the restaurant goes....I didn't do a full review but can tell you everything is very reasonably priced. The menu isn't extensive but I'm always able to find something to eat. The food isn't spectacular but depending on what you order, you can't go wrong, as I said, it's very reasonable. The service is pretty good too, they use this as a training ground for would-be waiters and waitresses so they try very hard. However, they're always trying to upsell you, part of their training I suppose. All in all, I enjoy my time here quite a bit and recommend you go by and visit as well. Famous people in Cuba are very accessible and Carlos is no exception, so go by and say hello.
As far as cigars go, as I mentioned, Maria is the house roller and does an excellent job. The humidor is well stocked nowadays and there's always way too many cigars, that is to say I'm always past my limit by the time I get here. There's plenty of seating area scattered around the shop and if that's not enough they have a private VIP area as well. Let's not forget that you can smoke in the restaurant as well and if that's not enough, upstairs in the restaurant they have private dining rooms if you have a large group. 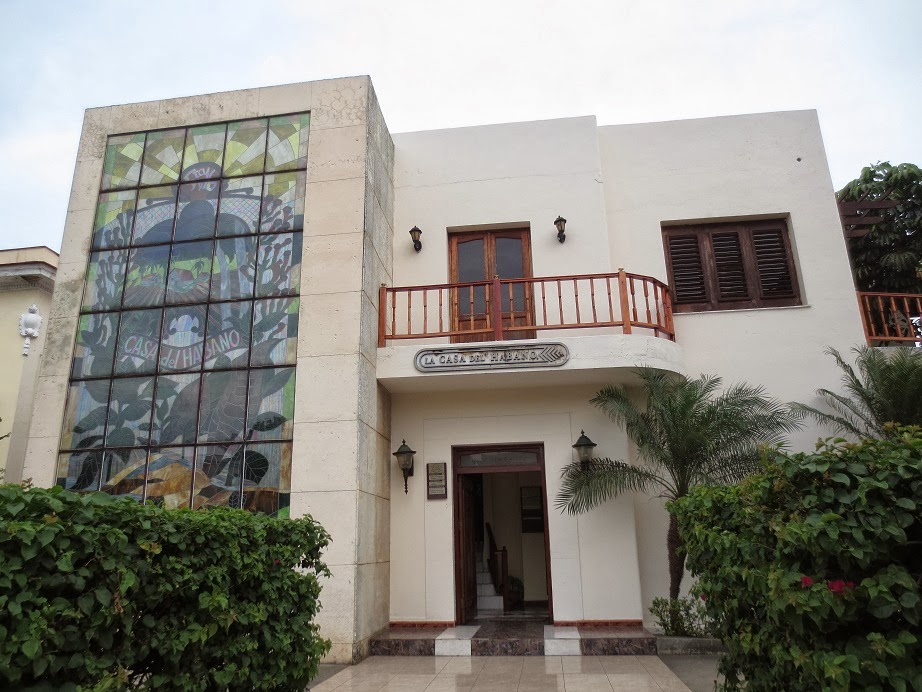 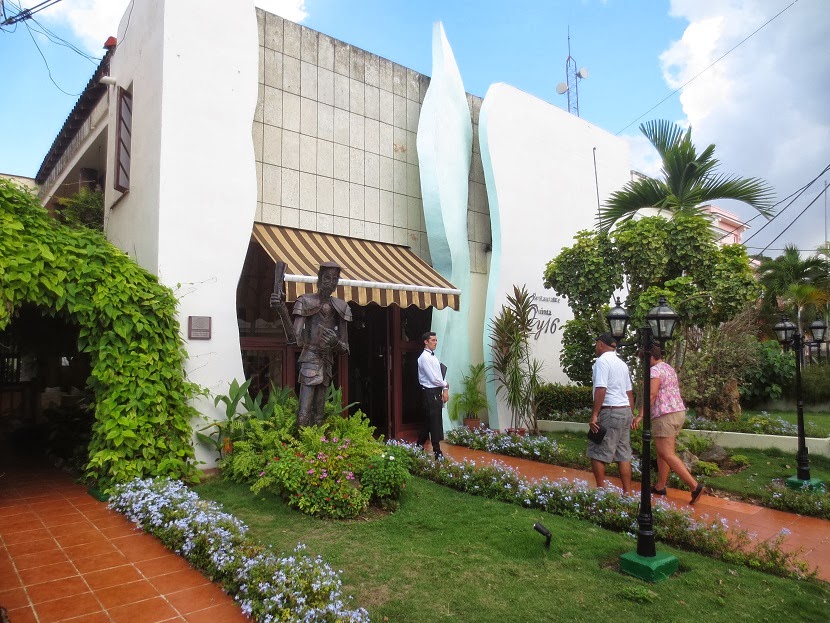 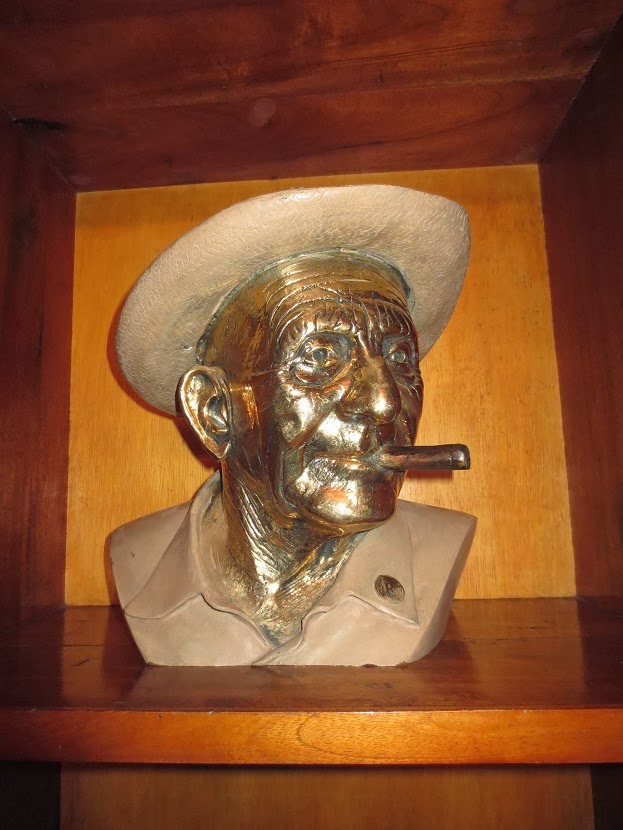 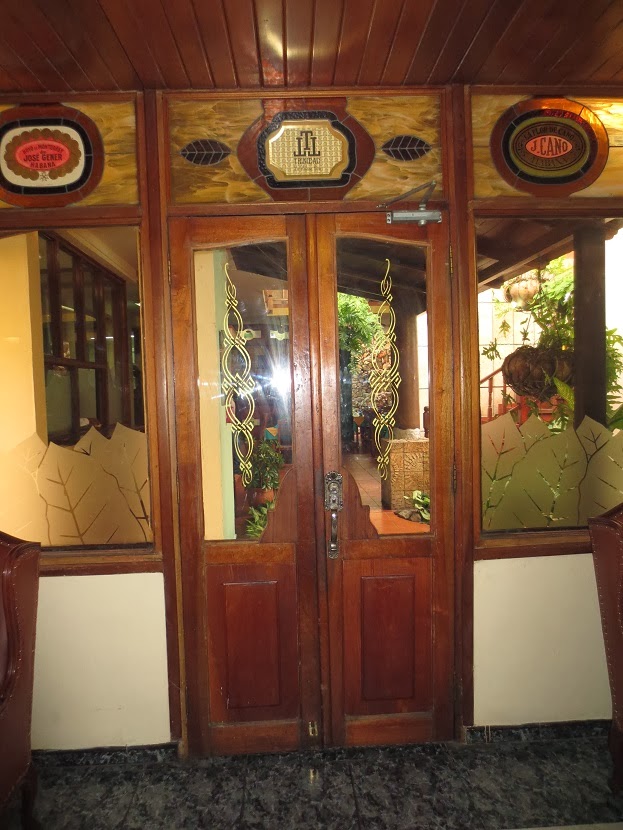 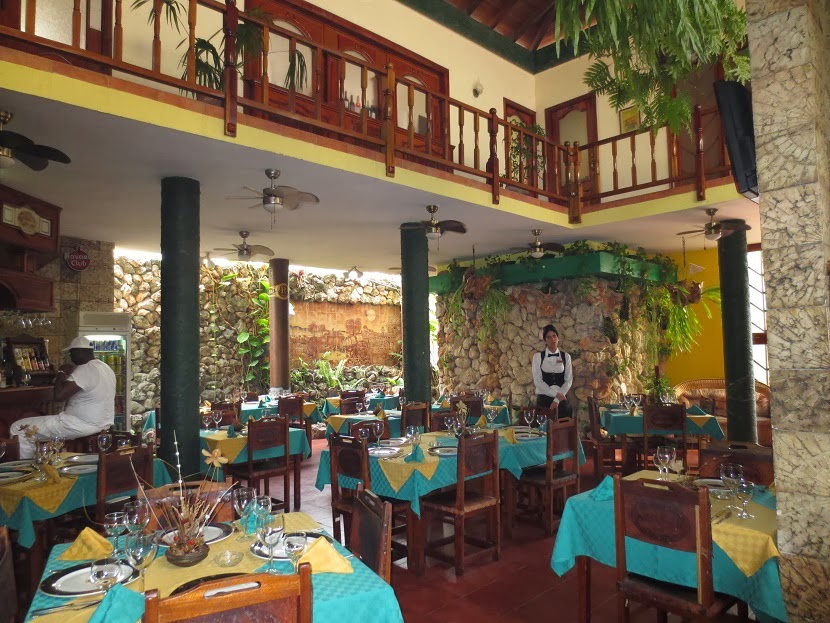 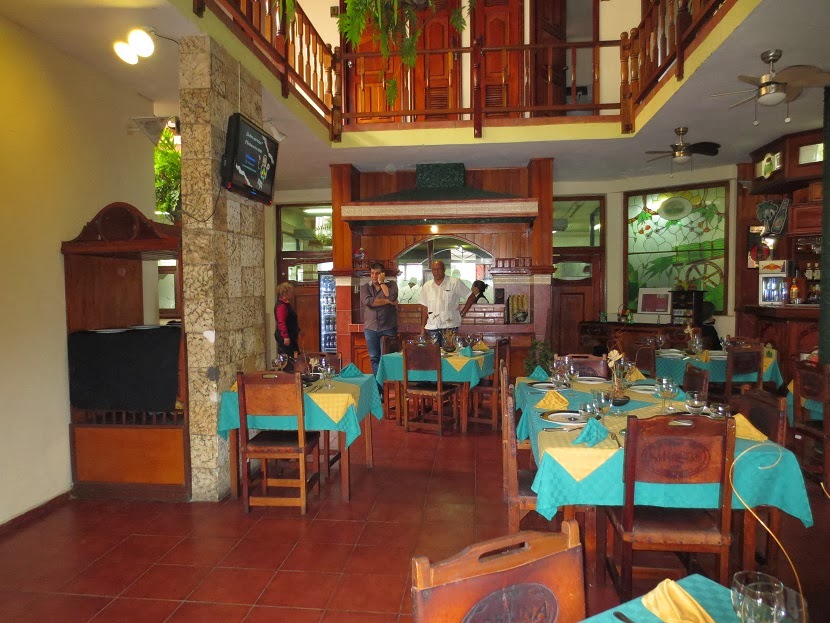 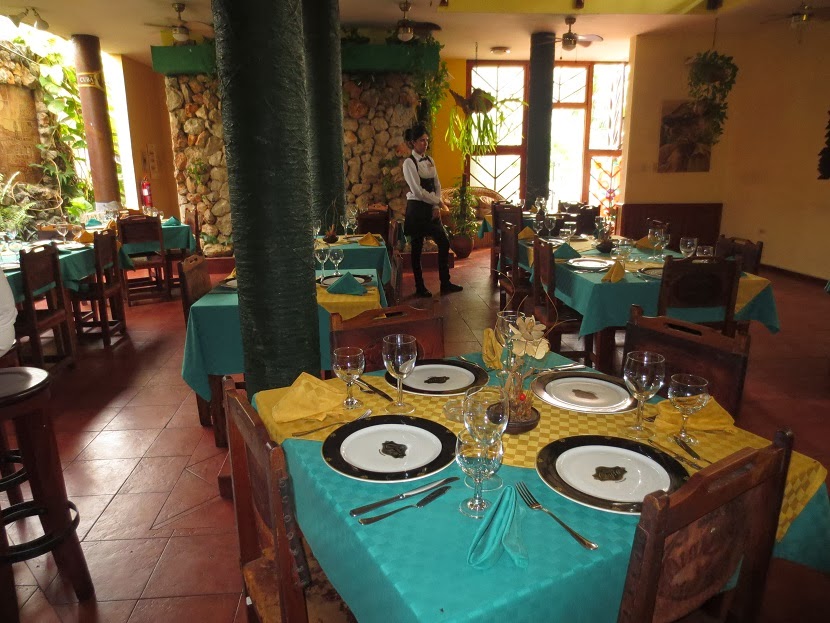 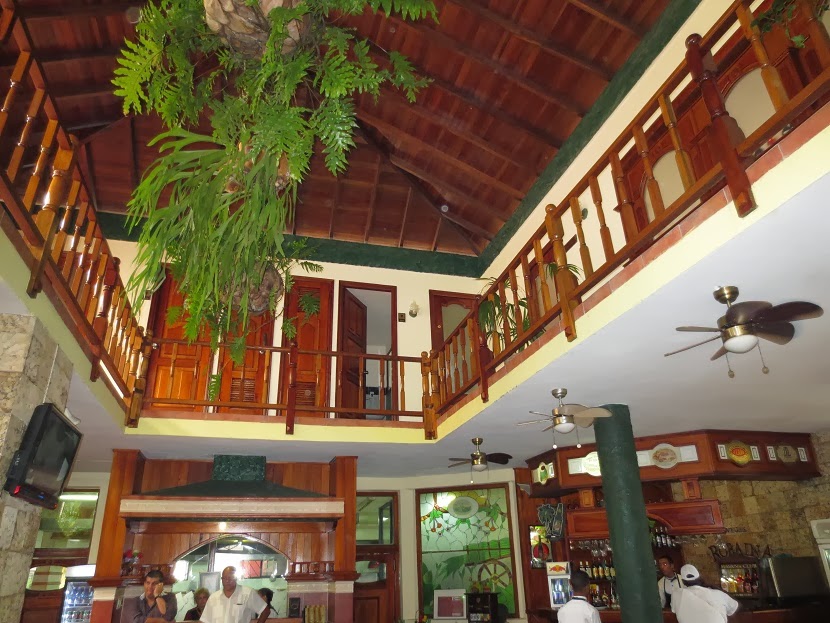 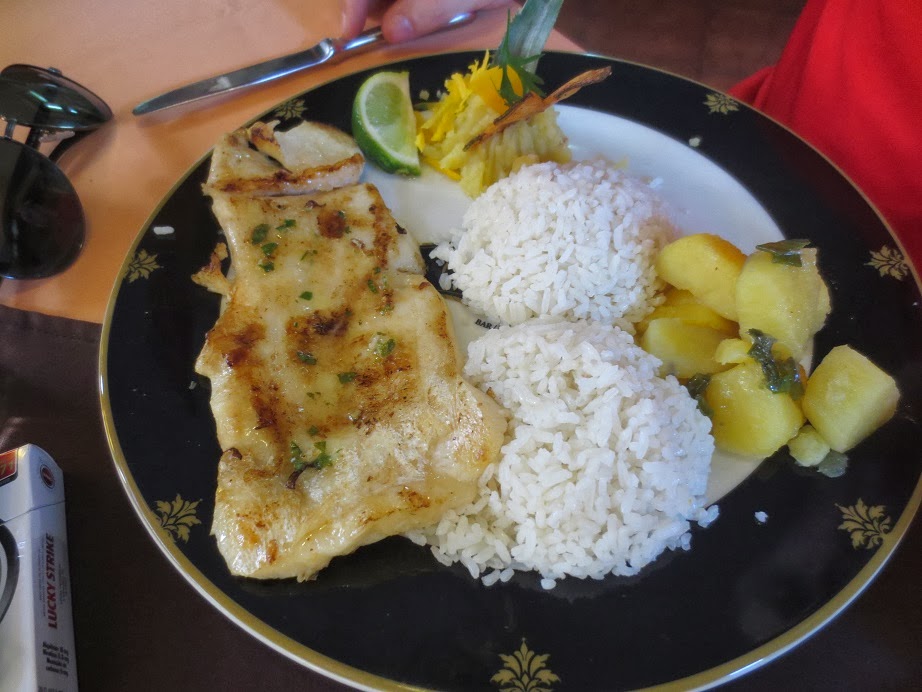 Filet of Sole with and without Cheese and Shrimp 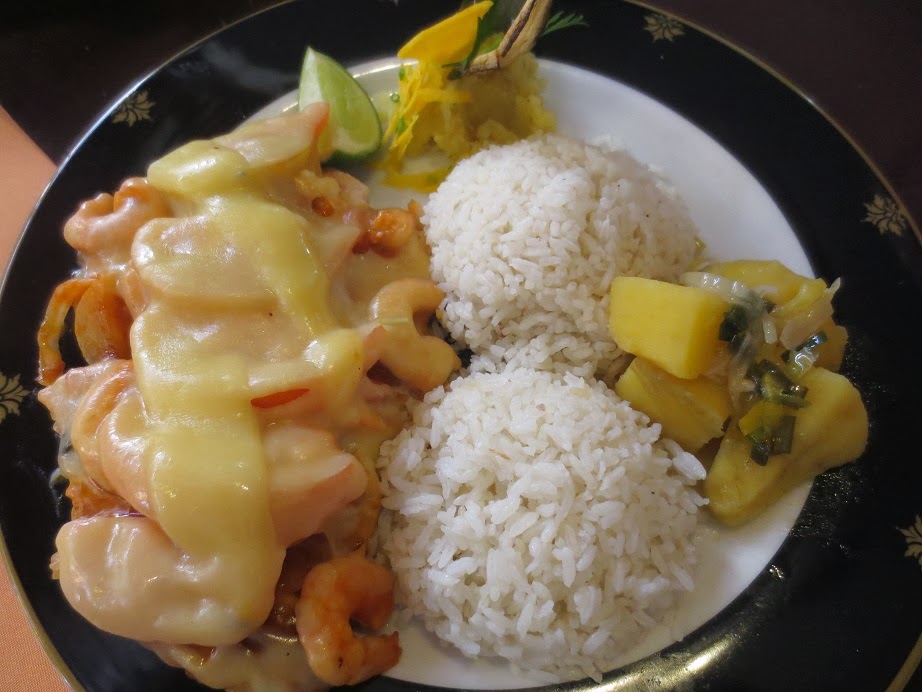 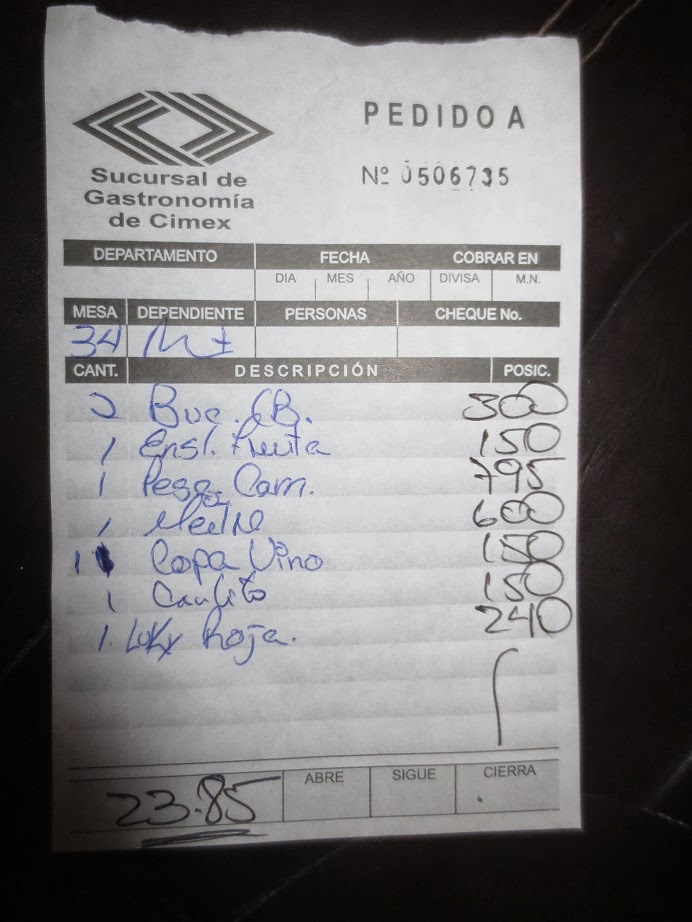 Lunch for 2 with 3 drinks and a pack of Cigarettes 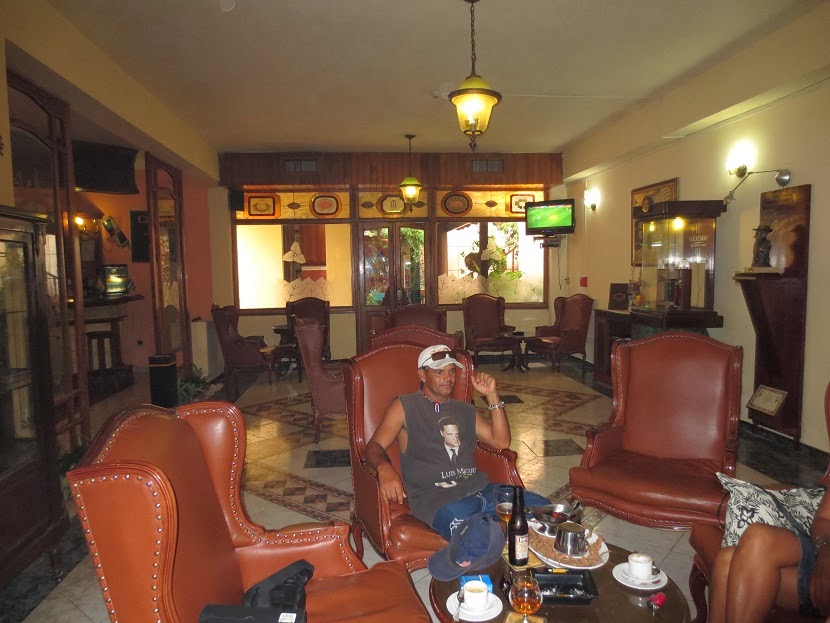 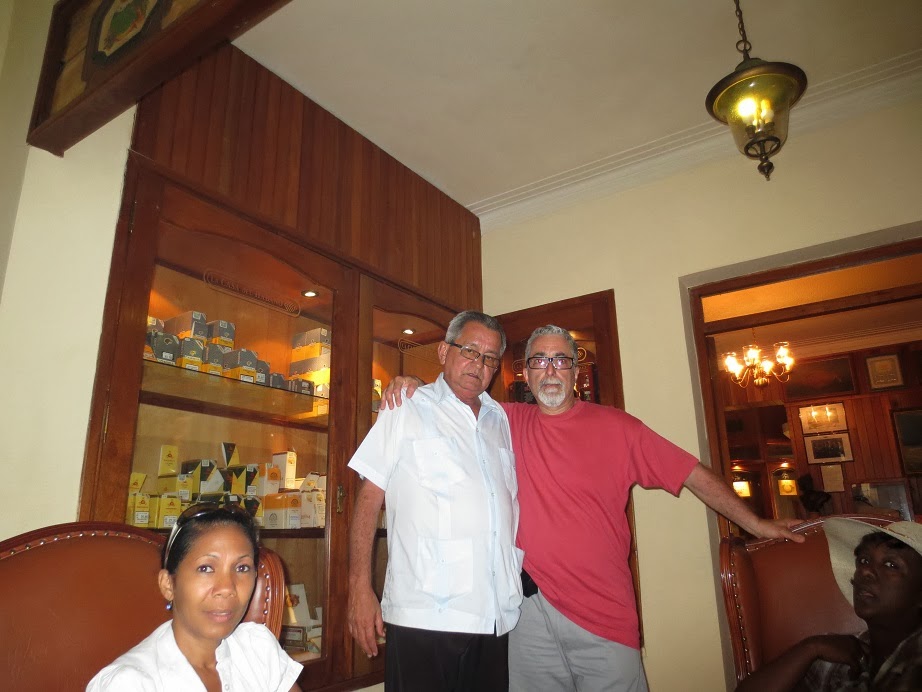 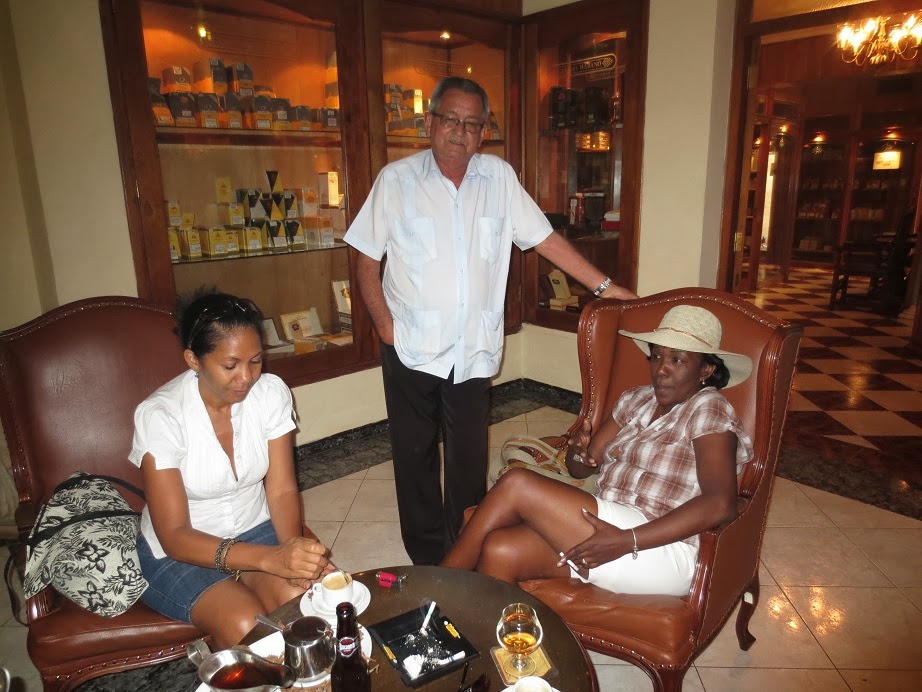 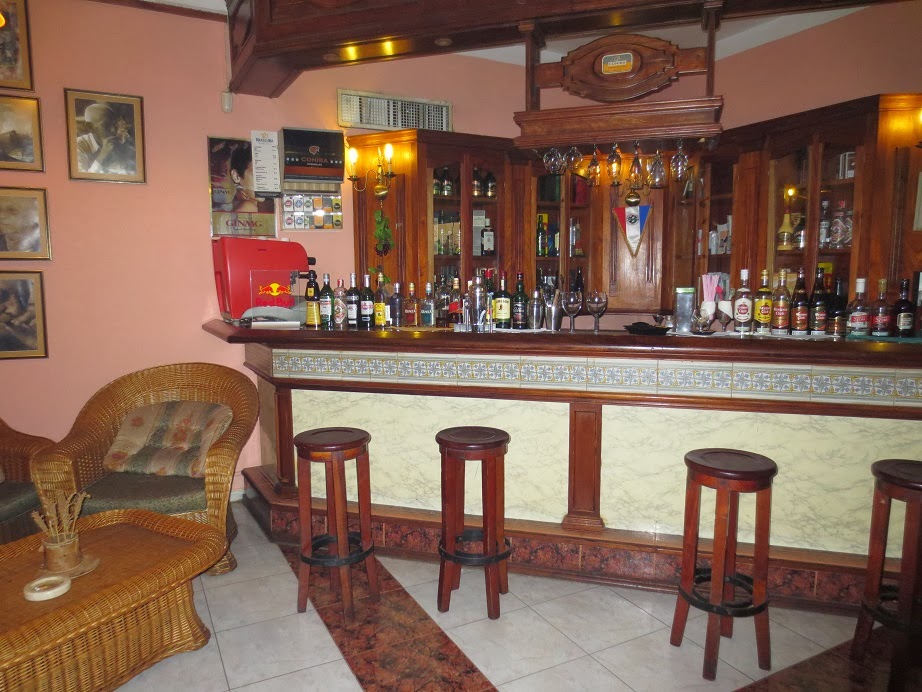 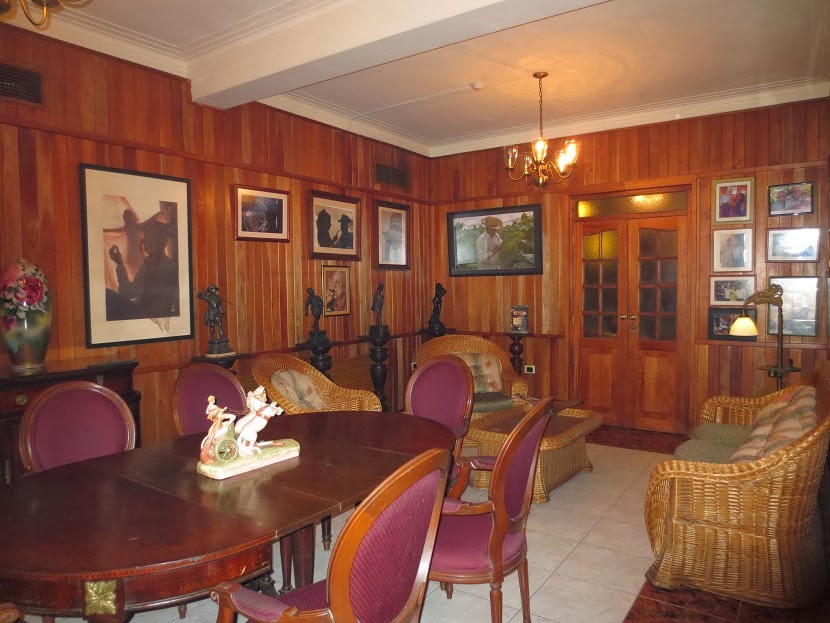 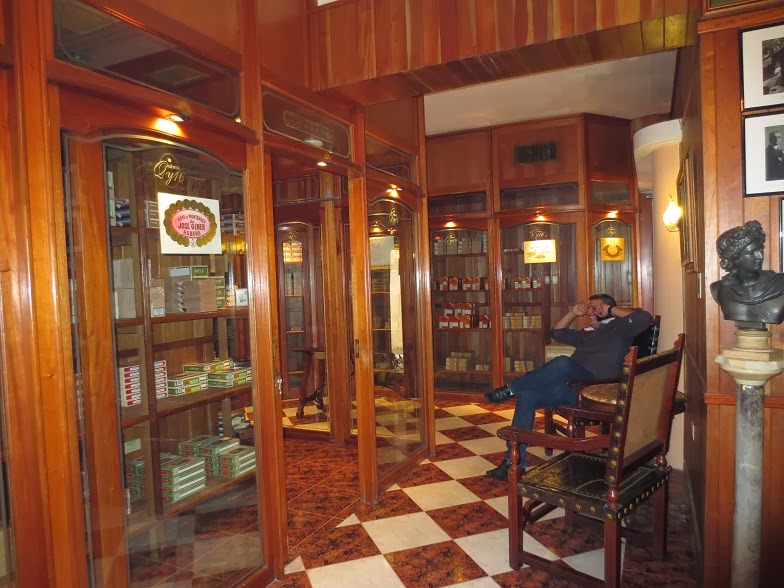 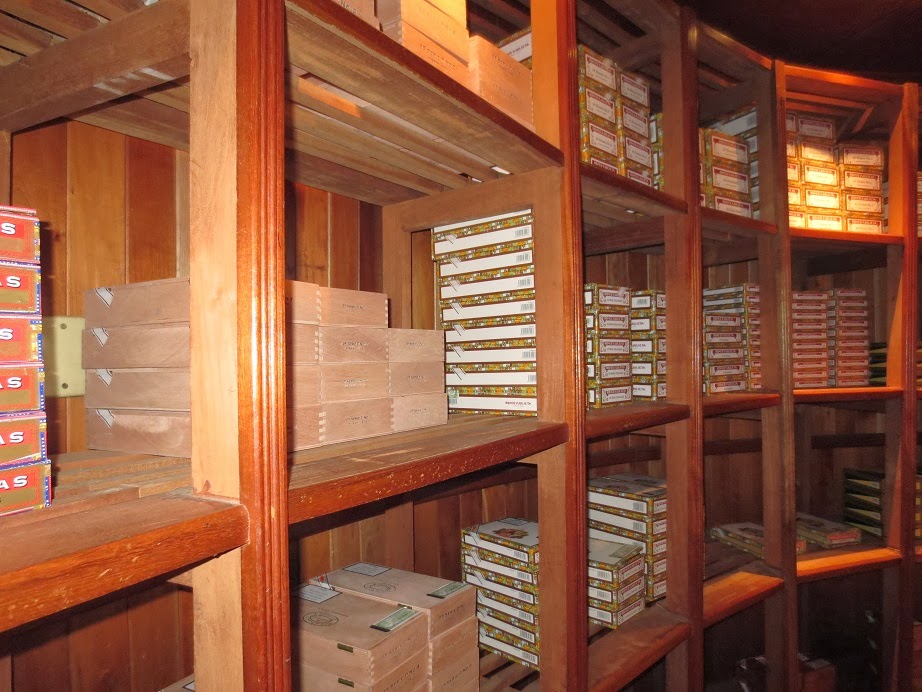 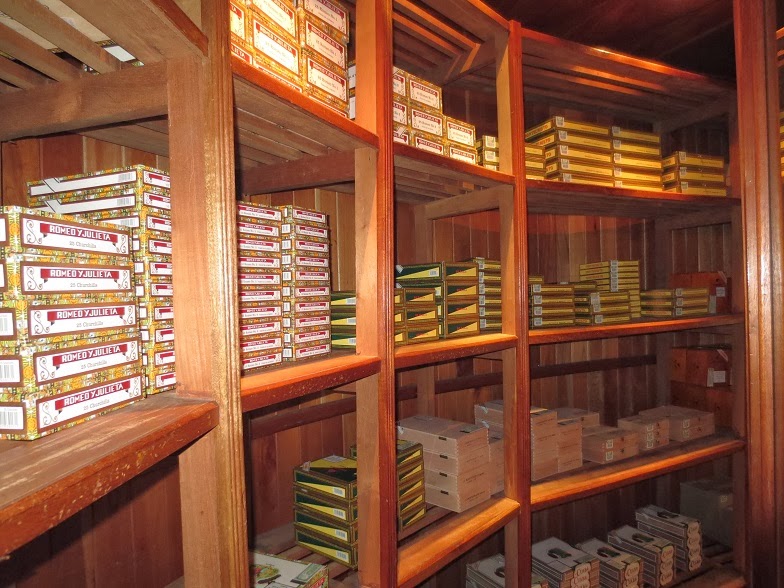 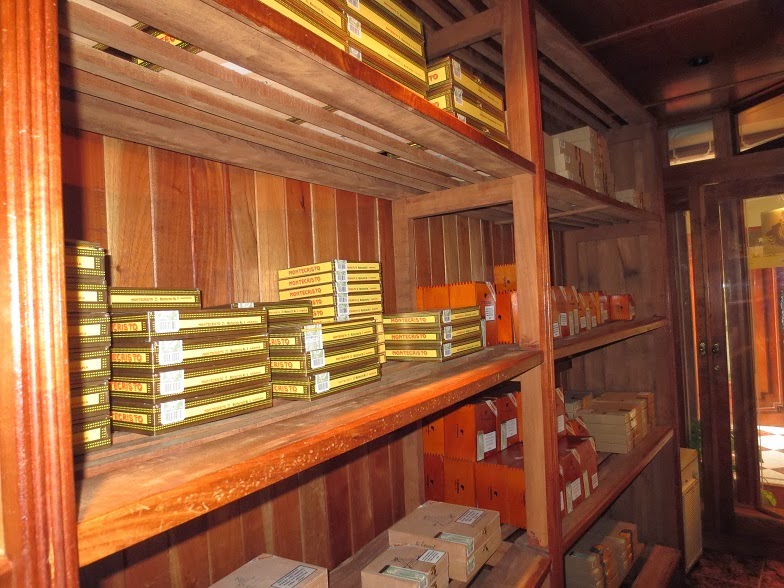 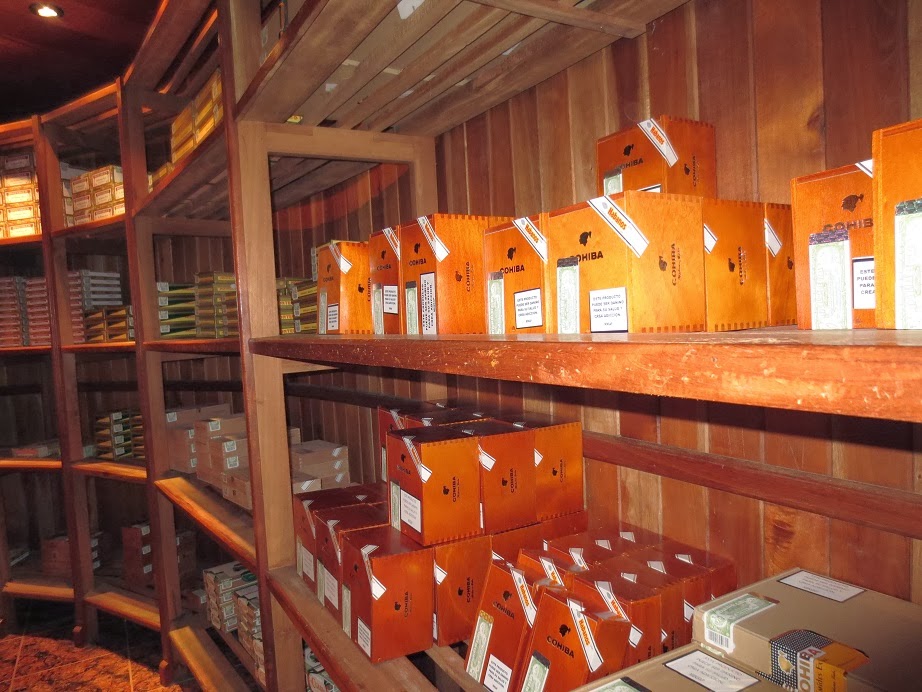 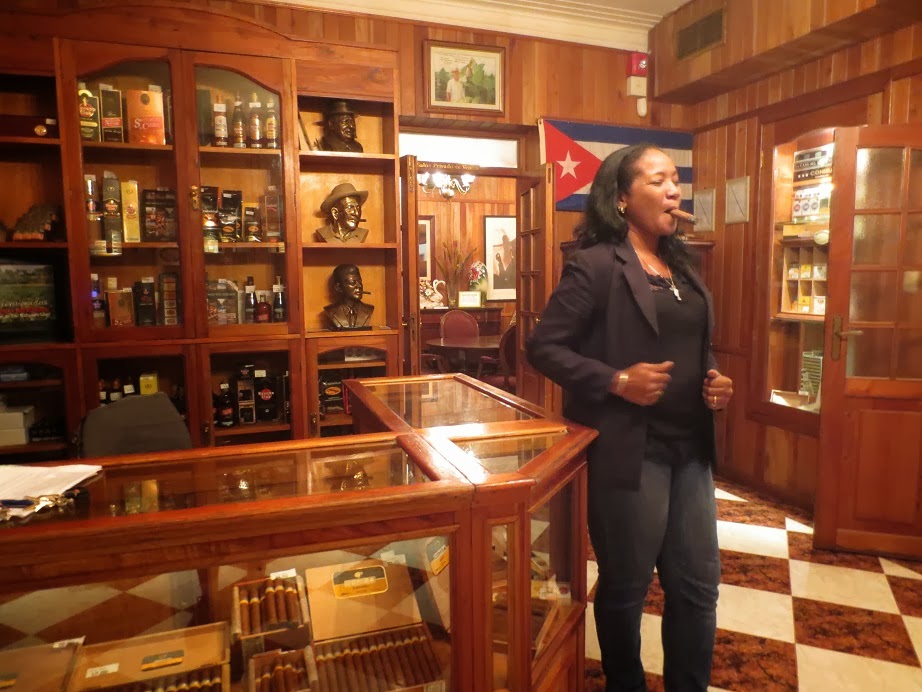 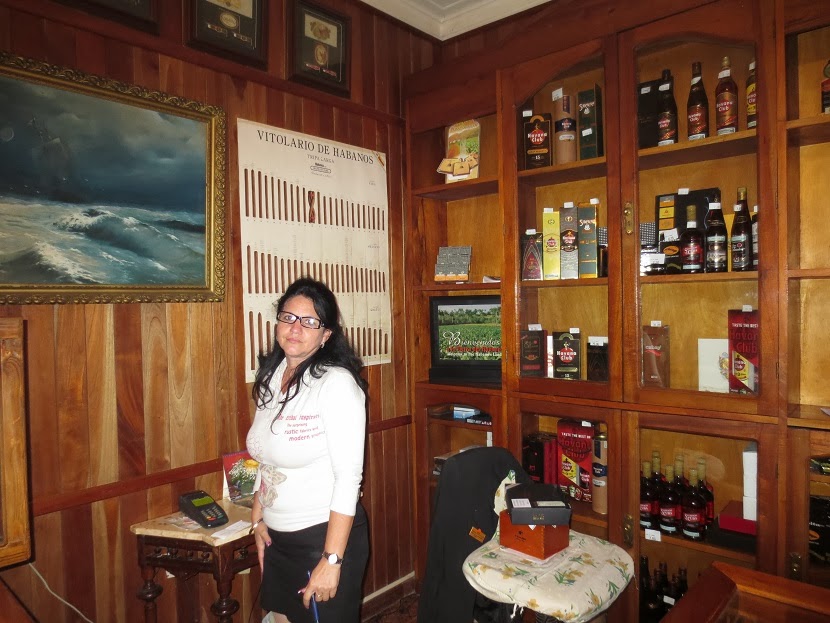 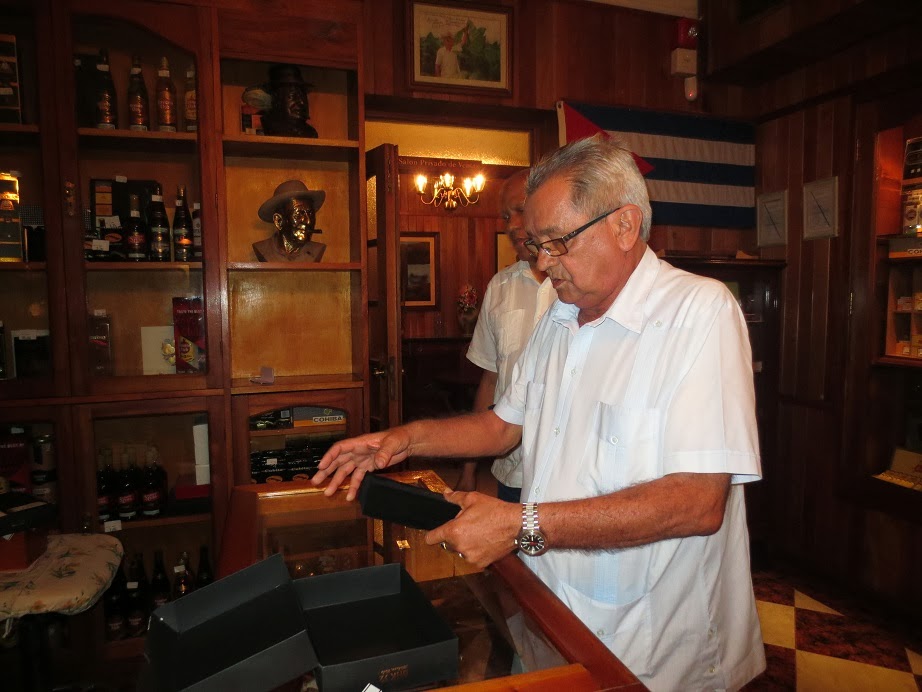 Carlos Wrapping up a Purchase
Posted by matteocigars at 09:58