Have any of my readers ever given any thought to getting a haircut in Cuba? I would guess that besides a very few of you, no, not really. In all the years of my traveling to Cuba, I hadn't either, until recently. On one of my current lengthy trips, I needed a haircut. Where should I go? I had read about Gilberto in several publication. Besides being involved with making his community a better place to live, he was also a good barber. I went to his shop to book an appointment and was told to show up on the requested day and it would be taken care of.
There was a time, not long ago, when this neighborhood was a typically deteriorated area of the city like many others in the area. You would never have guessed this by seeing the prosperity and beauty that exist here today along this stretch of Calle Aguiar known as 'Callejón de los Peluqueros' (Hairdresser's Alley). A number of private businesses have opened along this strip making it an attractive oasis of entrepreneurship in an otherwise wasteland of decrepitness in the Santo Angel area of Old Havana. Gilberto Valladares, aka Papito, was the first to open shop here. His vision of creating a better living space has prompted many others to open businesses here. Restaurants, Art Galleries, Rental Houses and Craft Shops make up most of the 20 or more of the businesses that have opened after Papito's original endeavor. What was once one of the ugliest streets in Old Havana has turned into one of the most picturesque that's visited by many tourists every day.
Papito came from humble beginnings, born in Havana in 1969, Gilberto was a wild child with little interest in school. His parents wanted him to learn a trade, do something with his life, to think of his future, so he chose to become a barber. He started his career in the working class neighbourhood of Jesus Maria in a State owned salon. Soon he began to really enjoy it and became proficient at his chosen trade. Afterwards he moved his way up to working at the Hotel Habana Libre's salon. It eventually wasn't enough to work for someone else, he needed to become his own person, he needed to run his own salon. And so Artecorte was born, opening it's doors in 1999 in the neighbourhood where he grew up as a child. Early on he cultivated a passion for the history behind his trade and had collected numerous antique objects relating to his profession.
Today, his original salon is as much a museum as it is a business. Around the apartment, old hairdresser's tools, mirrors & artwork, cover every inch of his establishment. You might even get your hair done in a 100 year old barber's chair. It wasn't possible for him to rent a space for all this to become a reality, so his original project began in the living room of his apartment....he still uses this space today, more than twenty years later.
He's considered Havana's best barber but his original salon turned out to be only a stepping stone to what has become a calling, the advancement or development of his surroundings beginning with his own neighbourhood. Artecorte has turned into a cultural project making life better for the people in his barrio and beyond. To be able to move to the next level, help from the Office of the Historian and Eusebio Leal was needed. A space was loaned to him rent free right across the street from his original salon. The Artecorte school opened it's doors in 2010. It's a non-profit organization that teaches disadvantaged kids a trade For Free. It started with the residents of his home barrio of Santo Angel and later expanded to include people from other areas. He's also started a children's soccer league, sponsored the building of a children's park & helped open social clubs.
The teachers (hairdressers) who train the kids in his school, do it for Free.You can come here as a customer and get your hair cut by a student for free. Although, from what I was told and witnessed, donations of any kind are accepted, whether it be in the form of money, food or beverages...anything at all. He's also expanded his teachings to bartending, offering free courses in one of the restaurants on the strip. It's a way to get kids off the streets and teach them a trade. Artecorte is improving the quality of life in the Santo Angel area and is now exporting it to other parts of Havana. It works with young people, children & grandparents in the community, giving them a better future and something to look forward to.
I was never able to get my hair cut by Gilberto, he seemed to be very involved in the administrative end of his Project. I didn't want my hair cut by one of the students (free), I had it done by one of the teachers (15cuc), el 'Chino'. He was in his mid 50s and had been cutting hair for decades. He did a wonderful job and I would seek him out the next time I need a haircut in Cuba. 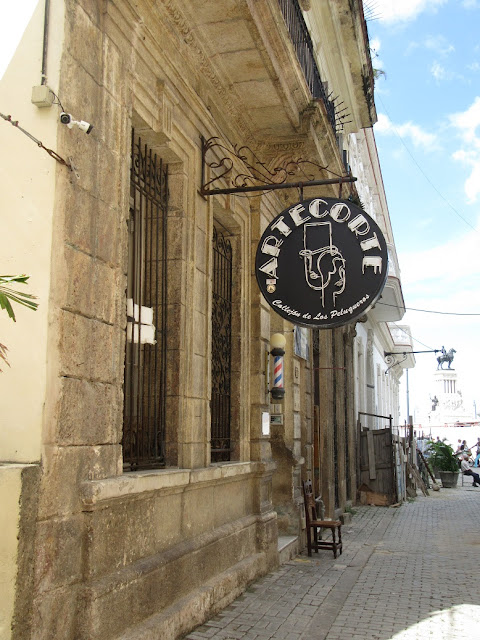 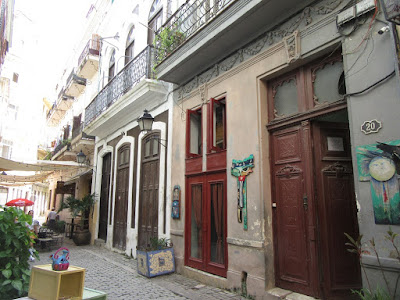 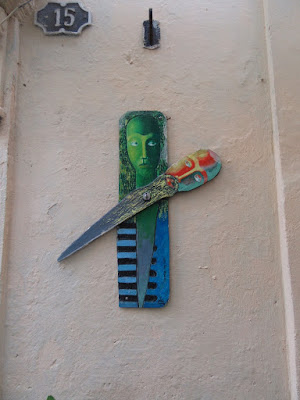 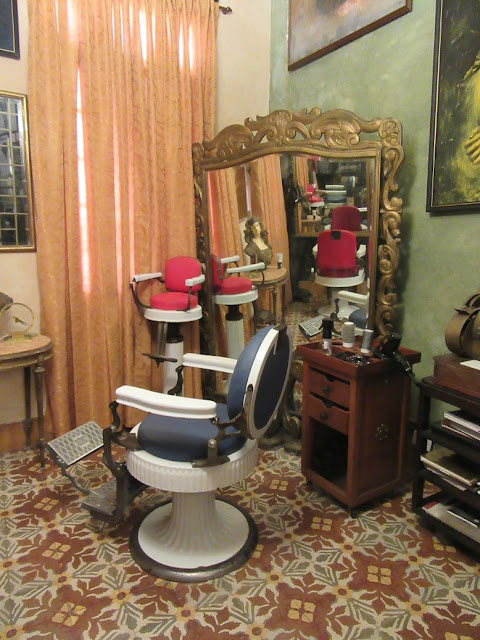 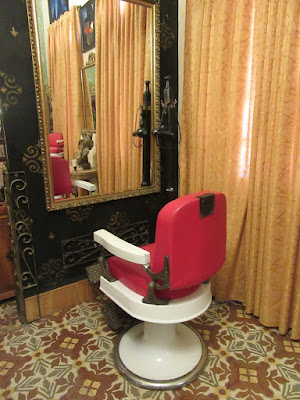 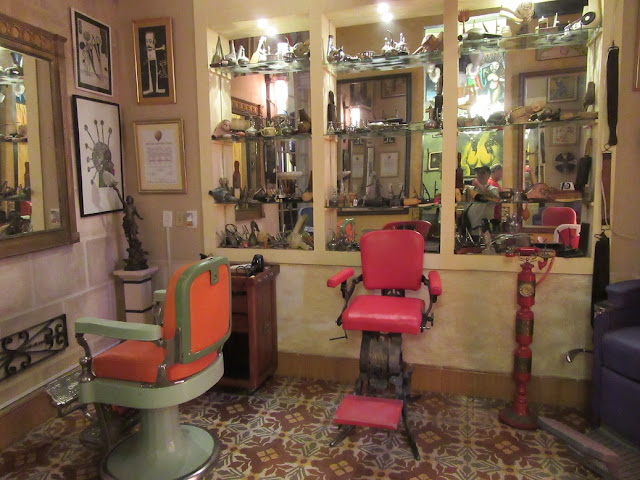 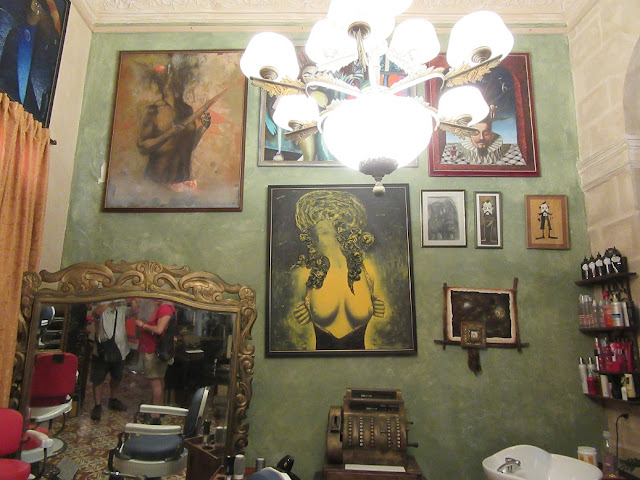 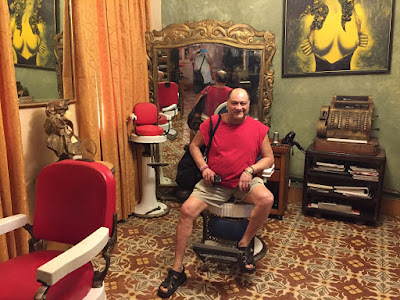 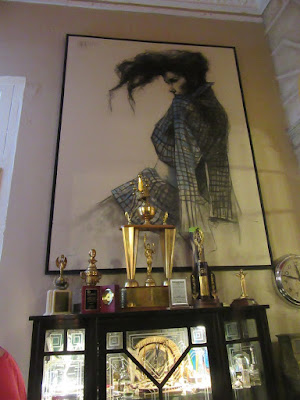 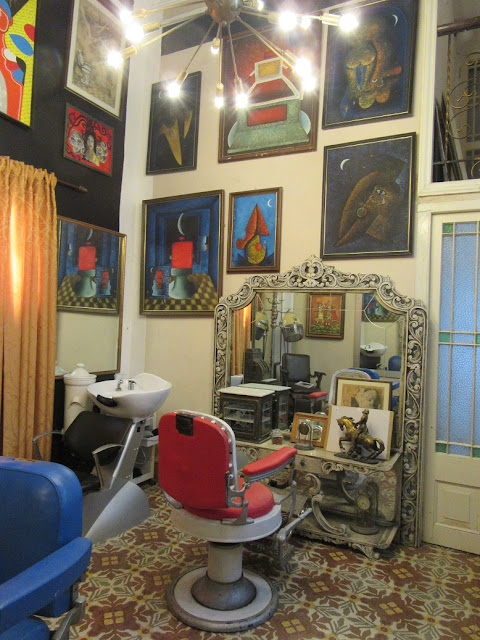 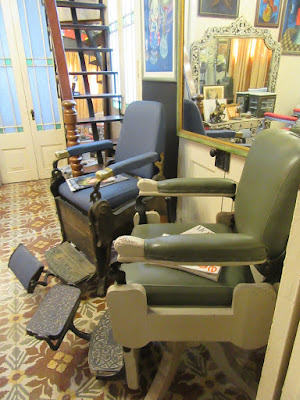 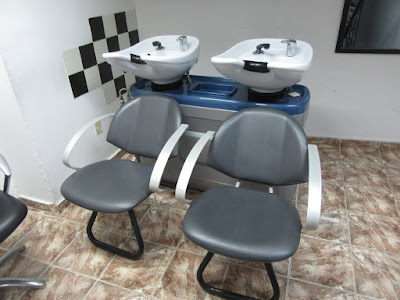 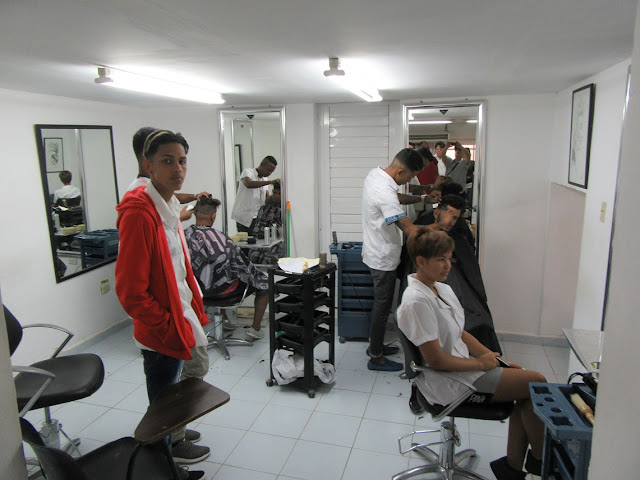 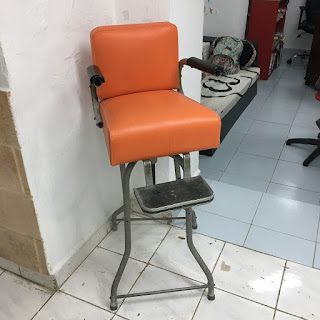 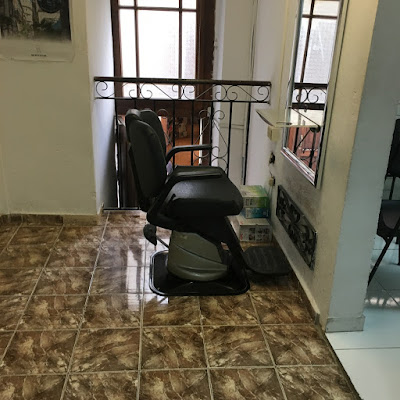 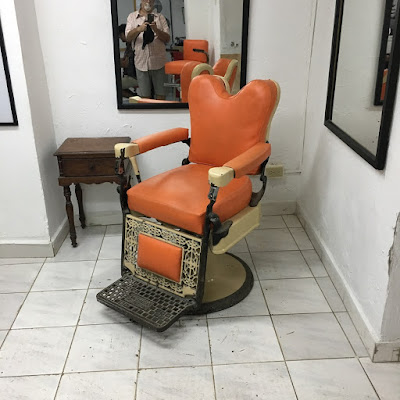 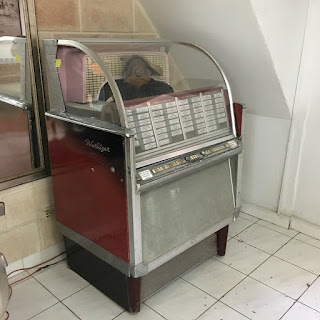 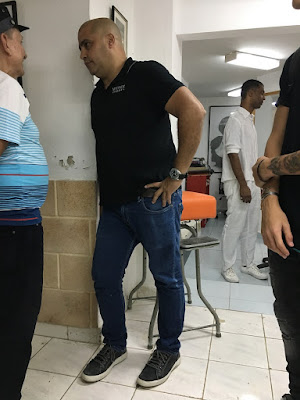 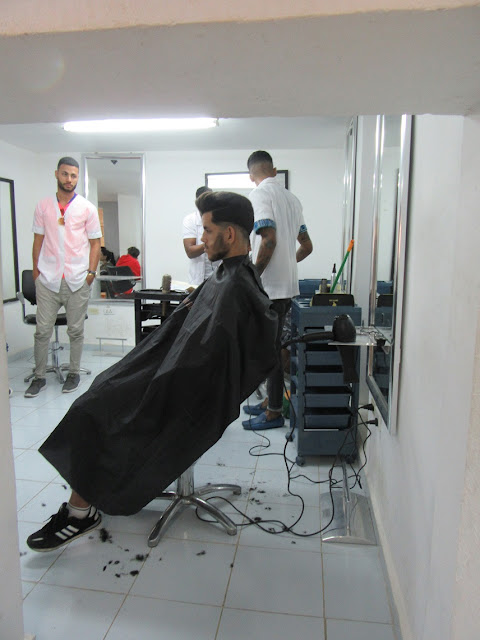 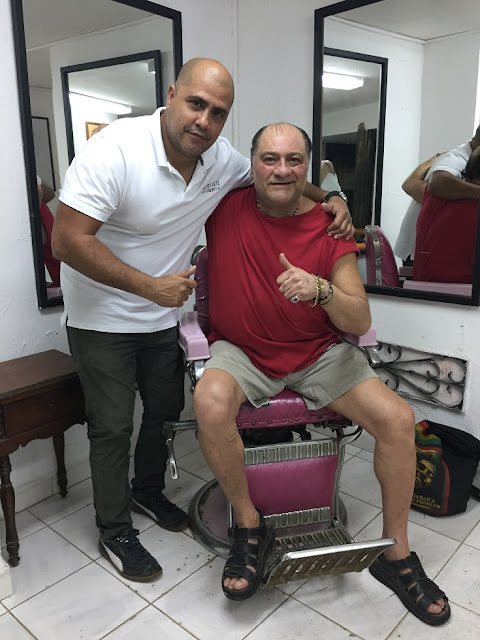 Gilberto with my friend Mino 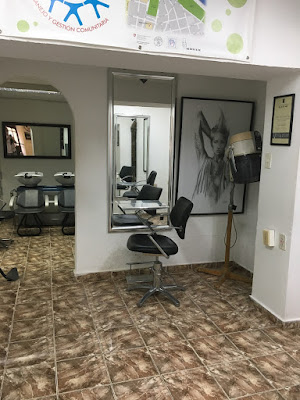 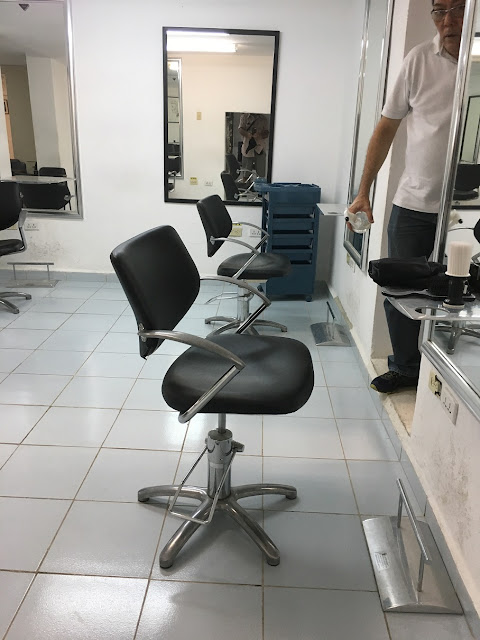 'El Chino' coming out to cut my hair 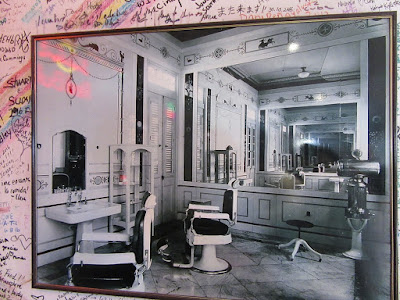 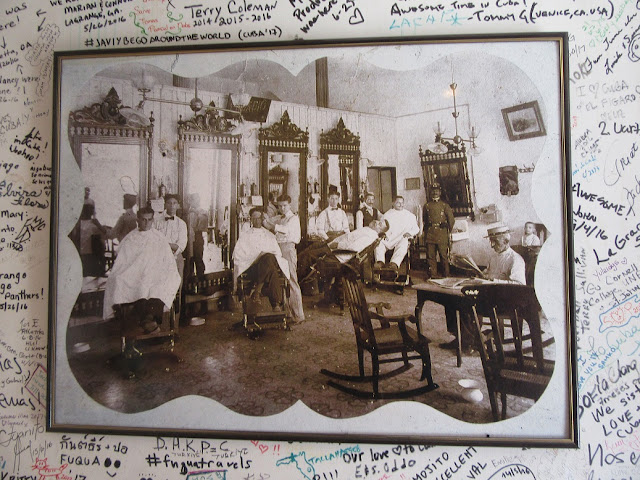 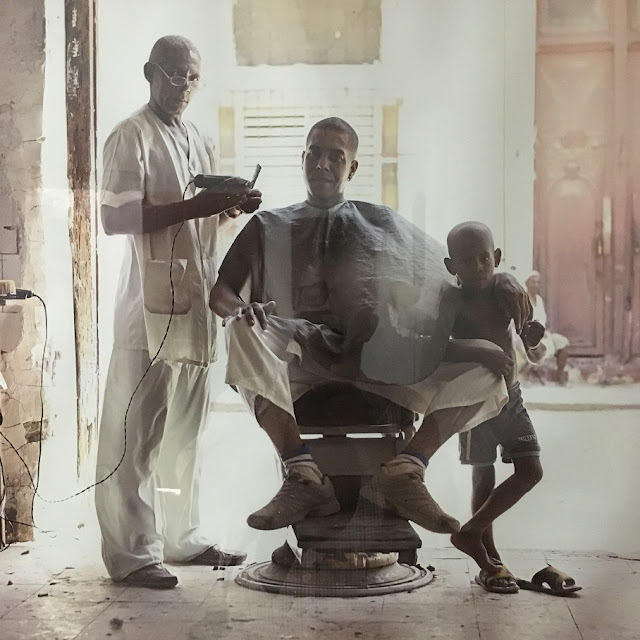