On my most current trip to Cuba this past May-June I went for obvious reasons but also because Havana hosted something that's called the 'Bienal de La Habana' which converts the city into one big Art Gallery inviting artists from all over the world (yes, even from the USA) to participate. Venues are opened in the most unlikely of spaces and some of the art is somewhat off the wall, that is to say, not for everyone's tastes. I myself, although I like art, I'm not an art expert....don't ask me what something means or what the artist was trying to say because I haven't got a clue. I either like something or I don't, I'm looking at different things, colours, textures, themes....it either grabs my attention or it doesn't. Michel's art grabbed my attention, the use of flags, colours, the newspapers used as a backdrop, it made me stop and take notice. I would have been great if the artist was there but unfortunately he wasn't on the site of his exhibit on the day I visited. Hopefully one day soon I can have a few words with him. The information I have written below was taken from material that I bought at the exhibit and roughly translated.
When he was 8 or 9 he had a friend who was 96 who would take him fishing along the Malecon of Havana on Sundays. On one of these Sundays, surrounded by other children of the neighborhood, he said to Michel, "Chico, I like being here with you because I feel you can teach me a truth that I've never discovered throughout my 96 years". The artist says that he thinks life, with all it's different and contradictory signs, grants him a decency and transparency that allows him to reach multiple faces of truth. in that sense he tries to remain a child, an eternal Peter Pan.
He had begun to work on wood more than ten years ago but it was totally unfeasible from a commercial point of view. He loved it but the gallery he was working with made him do a different kind of work. Many times a breach opens between what the gallery owners want and what the artist wants to make. One day he said to himself, Why? Why do I have to compromise myself and keep doing the same things when I have so much I wish to say. That was when he decided to save his money for a year so he could work for the next year producing what he wants, without any pressure. He knows he probably won't sell anything he's doing now because it's unknown and maybe a little aggressive with a touch of dissent (it's actually what attracted me). Although there may have been some dissent in what I found in that gallery that day, Michel is of the belief that there are different kinds of dissent and that one must coexist with it. He feels strongly about the message he puts on canvas which is why he has decided to take this year to express it.
Cubans have been searching for a symbol all these years and Michel was no different, the flag is what gave Michel what he was looking for. He finds it to be artistic and beautiful and so he expanded from there. The flag appears to him in many different ways in his head just waiting to be put on one of his creations for everyone to see. He regards himself as a product of his time or circumstances. Reflections and emotions are aroused within him and he shows them with all the honesty and crudeness that he's capable of expressing. All the images he shows on his works are reflections of the difficult relationship that has existed between Cuba and the USA. The Bienal gives the artists the freedom to express more than what is the norm, it is more accepting to the whims of the individuals involved. It's difficult to create a specific standpoint, since like every ongoing event, it has many faces and possible antagonistic approaches. After 56 years of an ice cold relationship with their neighbor to the north there are different points of view on the subject today. On the occasion of the Bienal Michel has received a lot of support from people living on the island, Cubans living abroad for years and also from those who have equally distant points of view.
In conclusion, like any art or artist, Michel Mirabal isn't for everyone but I like him. Some of his stuff is a little weird for my tastes and I'm not going to try to understand what he means by it, it would take away from the experience (for me). I tremendously enjoyed the works with the newspaper backgrounds that were telling a story which I believe I understood and thought how wonderfully he put his point across to the public who took the time to look beyond the art placed on this unusual canvas. Art has always been a way to express the feelings of the time and Cuba is no exception but it has never been easy due to the political climate. However, having seen the progression art has taken over the last half century I've notice a huge push to expand the boundaries of expression here on the island over the last decade. It's amazing to witness and I consider myself lucky to be here to see it. Michel has got my attention. If I could afford to buy art but most importantly, if I had a proper place to hang it, I would definitely love to have one of his pieces hanging on one of my walls. If you are a collector, he's worth a visit. Below is his information.
The pictures were taken at his exhibit for the Bienal at the Fortress of San Carlos de la Cabaña. 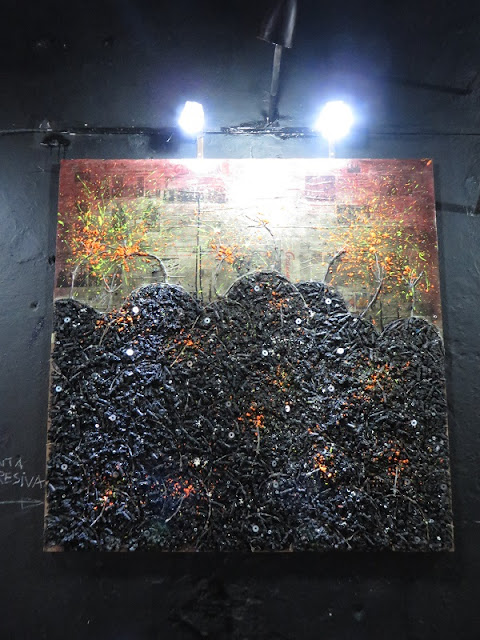 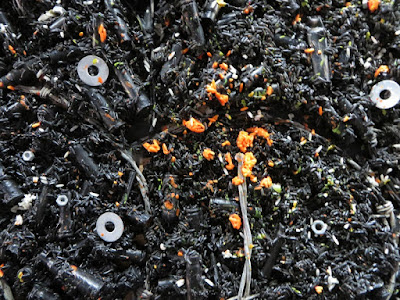 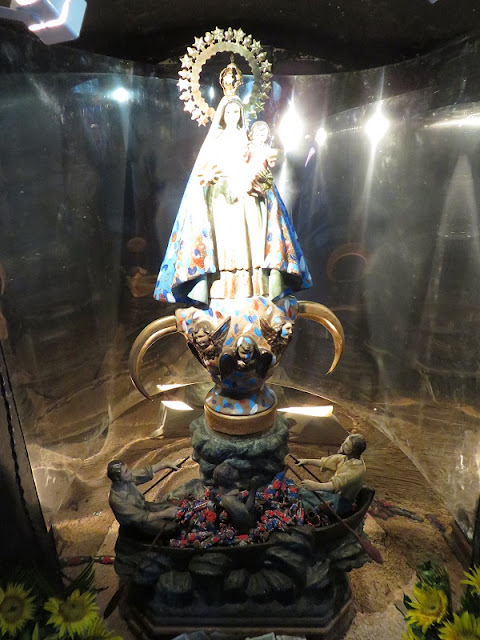 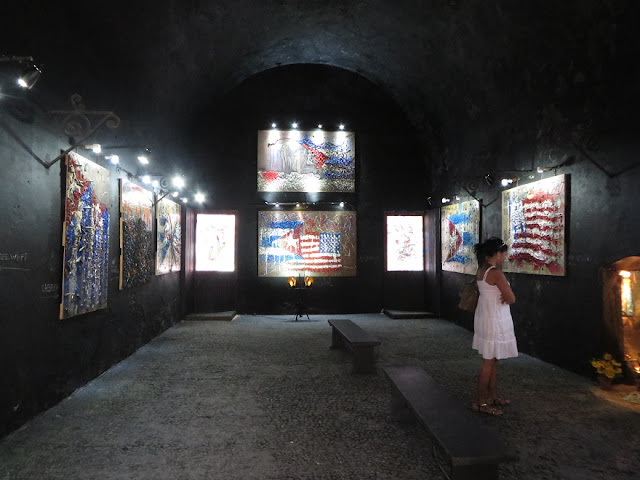 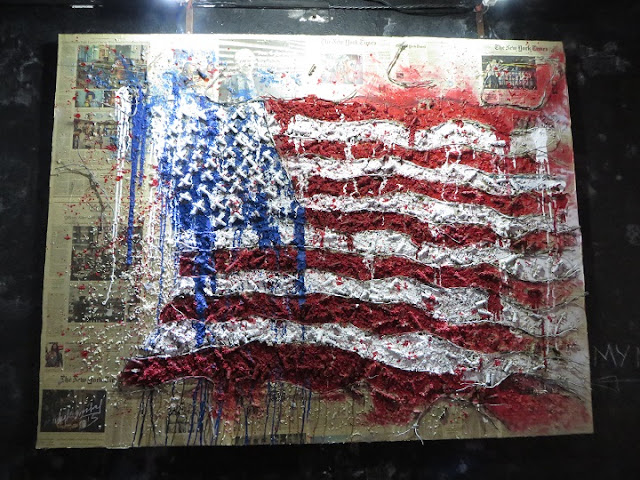 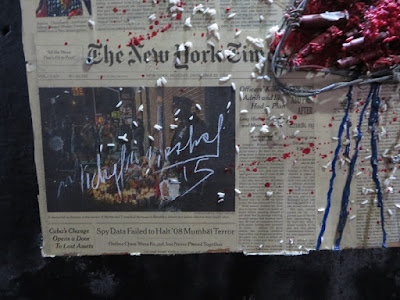 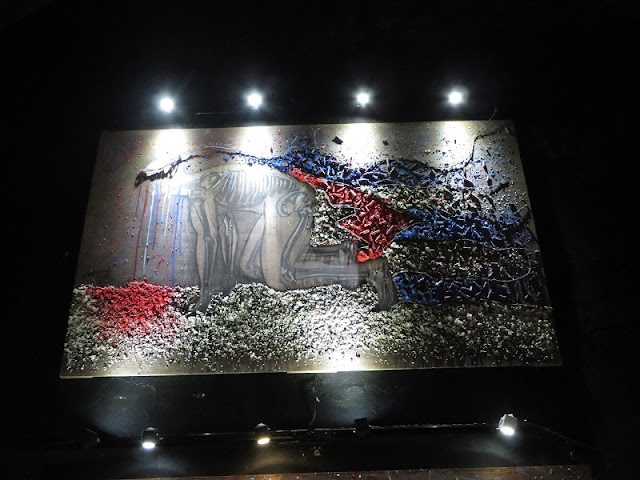 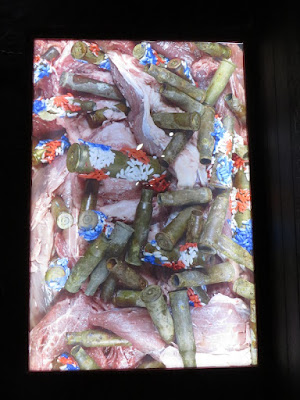 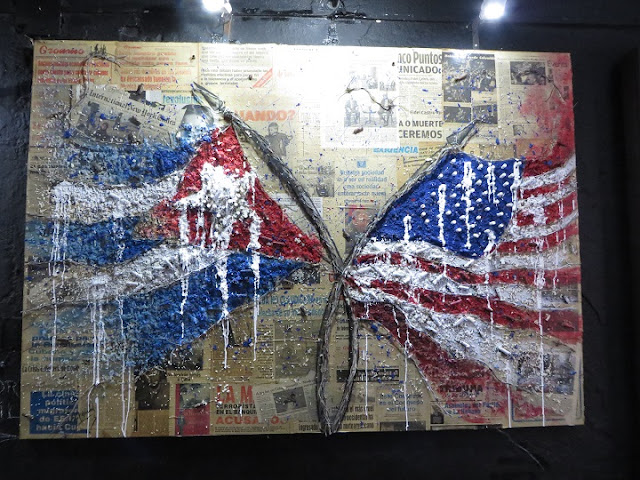 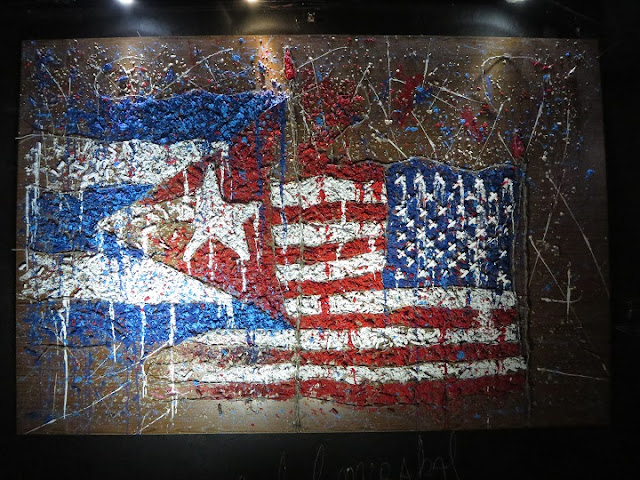 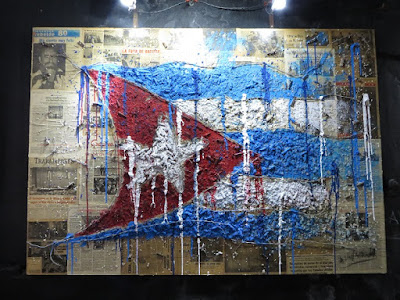 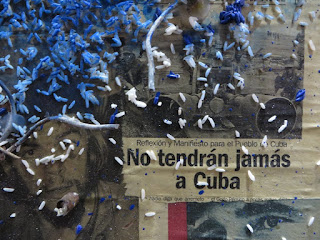 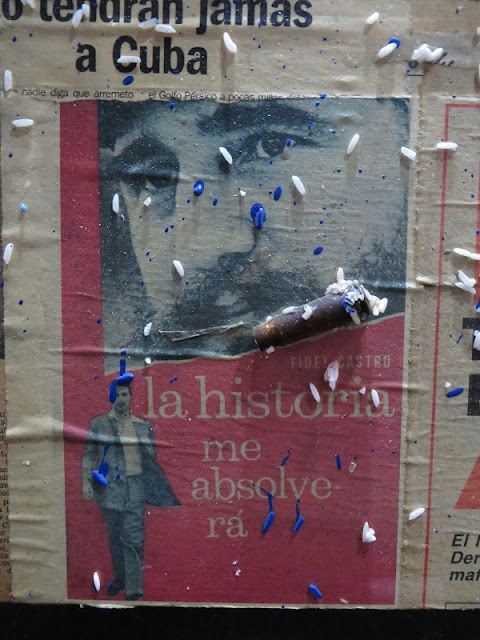 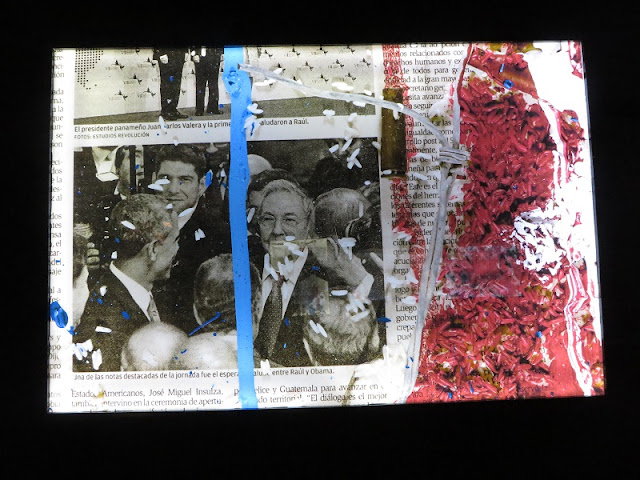 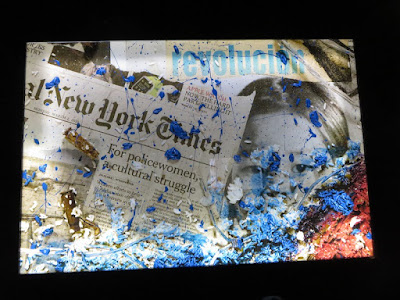 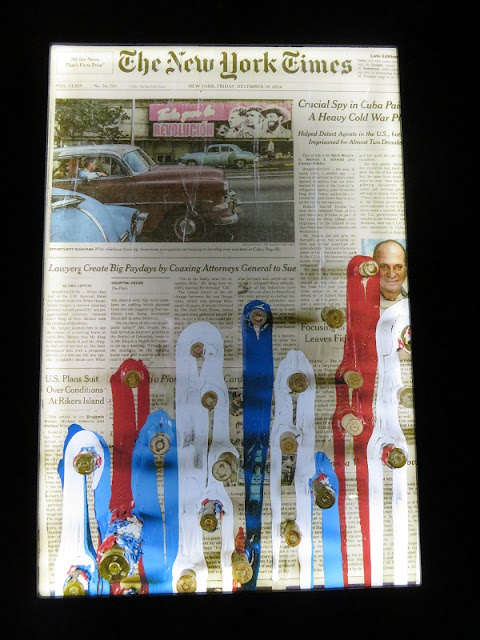 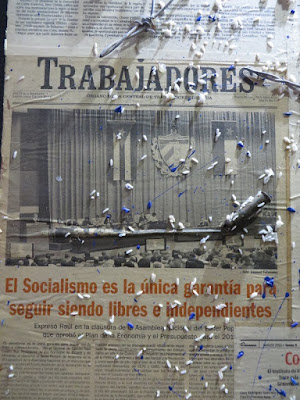 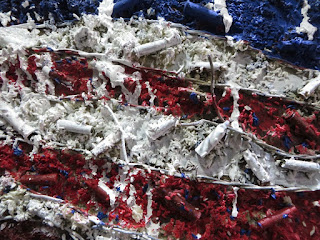 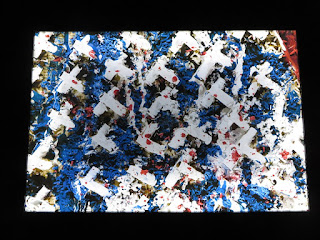 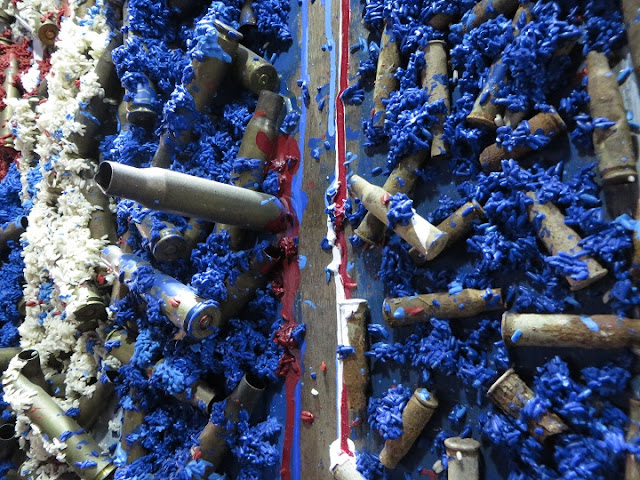 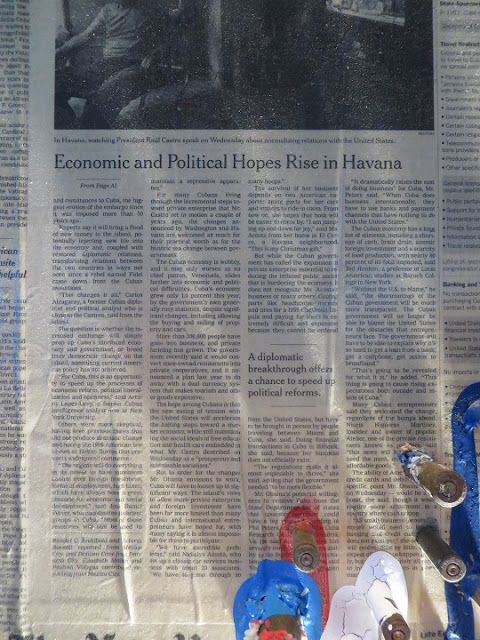 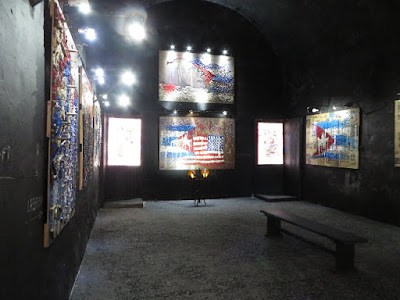 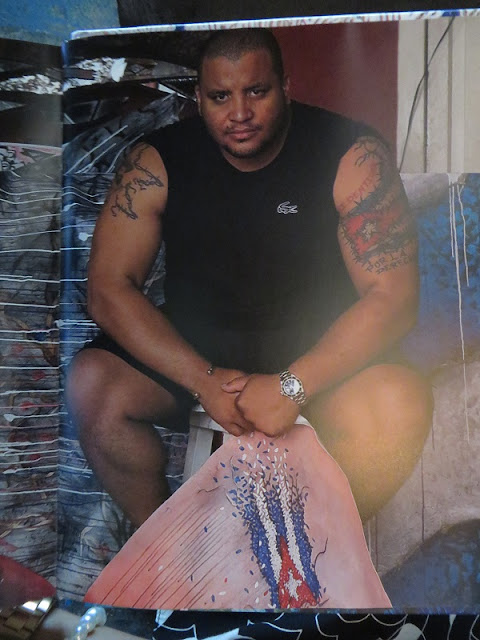